Home » Soccer » Jadon Sancho, Marcus Rashford and the importance of footballers not sticking to football

On Sunday, Jadon Sancho scored the first professional hat-trick of his career. He became the first English player to achieve the feat in one of Europe’s major leagues for 31 years. Such a confetti-infused storyline would usually ignite celebratory scenes and invite transfer stories galore, but the first thing on the forward’s mind was the murder of George Floyd by Minneapolis police.

He was African American, unarmed and he couldn’t breathe as a white officer, Derek Chauvin, kneeled on the right side of his neck for eight minutes and 46 seconds.

For Sancho, it was not the moment to revel in personal accomplishments. This was time to make a statement.

When the 20-year-old opened his account for Borussia Dortmund in the 6-1 victory over Paderborn, he reeled away and removed his shirt to reveal a message scrawled in black marker.

‘Justice for George Floyd,’ it read – a powerful demand that was later also unveiled by his team-mate Achraf Hakimi.

Sancho used his social media platforms post-match to further showcase defiance against racial oppression. His hat-trick became background noise as his activism hit the headlines instead. 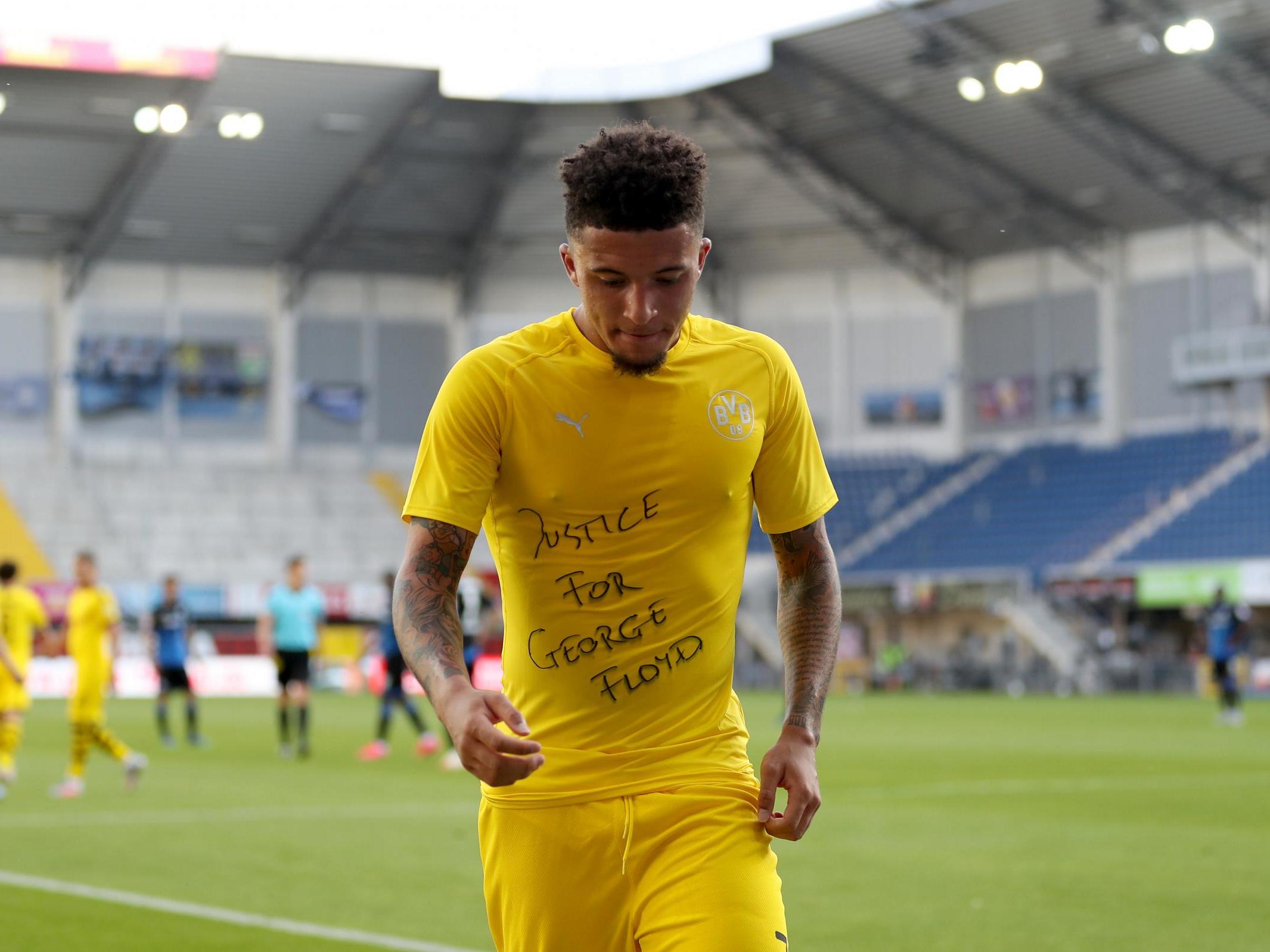 Importantly and encouragingly, he was not the only young footballer to use his voice as an instrument to help force necessary change over the past few days.

Marcus Thuram scored for Borussia Monchengladbach and marked it by taking a knee, a symbolic protest against police brutality first used in 2016 by NFL player Colin Kaepernick.

On Saturday, Schalke midfielder Weston McKennie wore a “Justice for George” armband during their loss to Werder Bremen.

“We have to stand up for what we believe in,” the USA international emphasised on Twitter, adding “and I believe that it is time that we are heard!”

Liverpool’s Rhian Brewster shared an authoritative post across his accounts, with part of it screaming: “A level playing field is all we have been crying for, forever. Hear us.”

The Manchester United striker also drew attention to the murders of Breonna Taylor, an emergency medical technician shot eight times by Louisville Metro Police and Ahmaud Arbery, who was killed by Gregory and Travis McMichael while jogging in Georgia.

These players, all under the age of 23, have refused to stay silent, regardless of the consequences. Speaking out requires great courage because it immediately removes comfort, can rattle sponsors, some fans and governing bodies.

Footballers are often actively urged to colour inside the lines, to refrain from living in the margins. They are coached to talk in cliches and to be conscious of their brands.

They can be restricted to mere assets, whose worth is calculated by their ability and commercial viability. It is also no industry secret that those who are outspoken can be labelled as problematic in recruitment files.

“Just stick to football,” a favourite rhetoric of trolls, is actually the easy approach. It is also the one written into the Laws of the Game, which should be challenged.

No political, religious or personal slogans, statements or images are permitted to be showcased, but how can amplifying Black Lives Matter – pushing for the removal of systemic racism and continued unjustified killings of people based solely on the colour of their skin – be considered against the rules?

Football cannot market its ability to generate togetherness, while having the means to punish players who want to promote equality and unity when it is most needed.

The German FA are investigating the Bundesliga contingent over their actions, but they cannot possibly penalise a call for the end to injustice. How can they oppose a push for basic human rights across the board? How can players be told what they feel doesn’t count? Disciplining them will equate to saying it doesn’t matter that black lives matter.

“We’ve got so many great young role models who are doing superb work, not just in the way they play but in the messages that they deliver as well,” Troy Townsend, from anti-discrimination group Kick It Out, tells The Independent.

“And I think it’s really important that we continue to have them doing that and they’re not diluted by the game. They should not be silenced.

“It’s imperative to hear our sports figures address big issues that are affecting people globally and to have them amplifying their messages to millions. We don’t change the world by keeping quiet.

“To see so many young players take a stand has been moving, it’s game-changing and long may it continue.

“It’s empowerment. They are empowering a generation who probably felt that their opinion would be challenged and that it wasn’t worth anything.

“For these youngsters to be able to align themselves to a professional player believing in the same message is encouraging and uplifting for them.”

Dotun Abijoh and Deji Odedina, co-hosts of The Beautiful Game podcast, agree that players shunning silence will enable others to use their voices.

“The current crop are raising awareness and it’s inspiring for us, because these guys are heroes,” says the former. “If they can make a stand, it’s a good thing for the rest of us to do.”

Odedina added: “In the past, footballers have been scared to speak out, but the new age of talent aren’t. That is really ballsy because they’re putting a lot of things on the line like sponsorship deals.

“They’re using their platforms for positivity and trying to influence change. That’s rubbed off on us as we feel empowered and emboldened to use our platforms to do the same.”