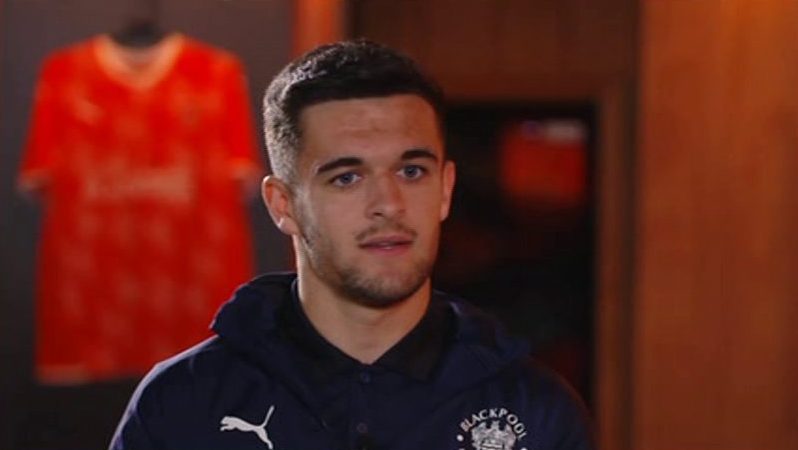 Jake Daniels hopes his decision to come out will inspire gay footballers in the Premier League and across world football to do the same.

The 17-year-old Blackpool forward has come out as the only open gay male professional footballer in Britain and just the second in the world after Josh Carvallo of Adelaide United in Australia.

Justin Fashanu became the first English player to come out after revealing his sexuality in 1990. Fashanu tragically took his own life eight years later.

Daniels, who signed his first professional contract with Blackpool earlier this year, believes other gay male footballers are struggling with expectations over masculinity in the game.

He hopes others can take confidence from his decision to come out and believes he can be a role model for others in the same position.

‘I think it comes down to a lot of footballers wanting to be known as masculine, and I think being gay, a lot of people use it as being weak,’ Daniels told Sky Sports News.

‘So a lot of people would say, “You’re doing that because you’re gay” and they’re going to say it’s because you’re weak, but it’s just not the case. People don’t want to [come out] because in football they are masculine and it’s something you can get picked on, on the field.

‘So not a lot of people want to do it, but I think because no-one has done it, no-one has the confidence to do it yet so I want to be that role model and maybe push people to be able to come out.’

Daniels hopes other gay footballers, even those in the Premier League, can now feel comfortable in coming out or even reaching out to him to help them with the process.

Asked if he can inspire others to come out, Daniels continued: ‘That’s what I’m hoping for anyway. I think because I am younger, people will think, “If this kid is brave enough to do it, I feel like I’ll able to”.

‘So I just want to do that for other people and maybe if there’s Premier League footballers who are gay and ready to come out – or they want to and are just waiting – I want someone to contact me and ask, “How’s it been? What was the reaction like?” Because I want to help other people, I just hate knowing that people are in the same situation that I’m in.

‘If a Premier League footballer does come out that would just be amazing and I’d feel like I’ve done my job and I’ve inspired someone else to do it. I just want it to go up from here, we shouldn’t be where we are right now.’