The last game played in Scotland before the lockdown started was Rangers’ 3-1 Europa League defeat to Bayer Leverkusen, and the return leg could still be several months away.

UEFA are intent on all European competitions being completed by the end of August, but the finalising of domestic leagues would be prioritised before the Champions League and Europa League fixtures are played. “I think it will be strange,” Rangers club captain told Sky Sports News.

“Whenever we do get back to playing football, we’ll need to prepare for that one-off game, but I don’t know what the government guidelines will be like at that time, so we’ll have to wait and see if it goes ahead.

“When football does get the go-ahead, we’ll obviously get a mini pre-season, so that’ll be something that we’re used to at least.

“I’m hoping it’s soon. I keep watching the news every night to see if there’s any more updates, and listening to see what the league and the club are saying, but obviously we all need to stay safe, so it’s up in the air as to when we’ll get back, but I’m hoping it’s soon.” Rangers sit 13 points adrift of leaders Celtic in the Scottish Premiership table after a mid-season slump following the winter break. The lockdown has given Tavernier plenty of time to ponder where matters went awry after Christmas.

“It happened the season before as well; it’s something that I can’t put my finger on. We got taken to Dubai where we had a good training camp, but when we came back, we weren’t firing like we were before the break.

“It did affect us in the league with the dropped points, but the [continued] Europa League run helped in the meantime and started to boost the lads in the way we played.

“There are obviously still games to finish, so this added time with rest, hopefully when we can get back, we’ll be all fresh and firing on all cylinders.

“We’ve all been given dietary and fitness plans, so every morning I’m working out, and that sets my mind in a good place. We’ve got ball work that we can do which will hopefully keep the technique up to scratch from when we do go back in, so we’re just ticking over as best we can.” 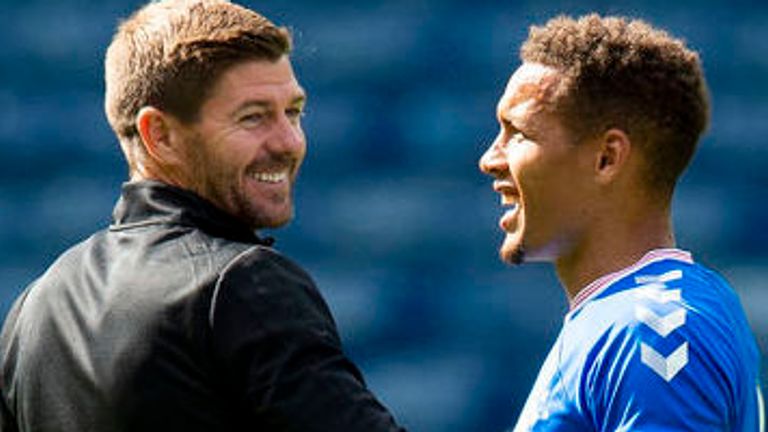 Tavernier and his team-mates, along with manager Steven Gerrard, have donated 15 iPads to the Marie Curie hospice in Glasgow for use by patients unable to be visited by relatives and friends during the lockdown.

“This was a no-brainer for us – we are all going through challenging times, and even more so the people that are in care with families who can’t come to see them, so I’m obviously proud of all the lads who have contributed to it, and the gaffer as well,” Tavernier said.

“We’ve got such a fantastic system that we can be proud of. I’ve got family working in the NHS, and you obviously worry about them in the time that we’re in, but they’re at the front line doing the hardest part and keeping us all safe.

“Luckily enough everyone I know of is safe and sound, just self-isolating. My brother [Marcus, a winger with Middlesbrough] is staying with my mum, so they’ve got some company, but my dad is still working; he’s a truck driver, and he’s isolating in his cab. “That’s not too bad and I don’t have to worry about him too much, but he’s one of those still having to work and help keep the country ticking over; they play a vital role so we can only thank them.”

Another easy decision, according to Tavernier, was volunteering earlier this month along with teammates, coaches and executive staff to take a three-month wage deferral. Many non-playing staff have been furloughed as Rangers utilise the government scheme introduced in March, with their wages being topped up by the club.

He said: “We are one club and we want to look after each other and do anything we can to help. When it [proposed wage cuts] got put forward to us, I spoke to the lads and everyone agreed to do it. To keep everyone paying their bills and not having to worry, you don’t want that to happen at this time because there’s people out there who are in that difficult situation.

With little work to focus on, Tavernier has, like many parents across the country, become a makeshift teacher to his school-age children – with mixed success.