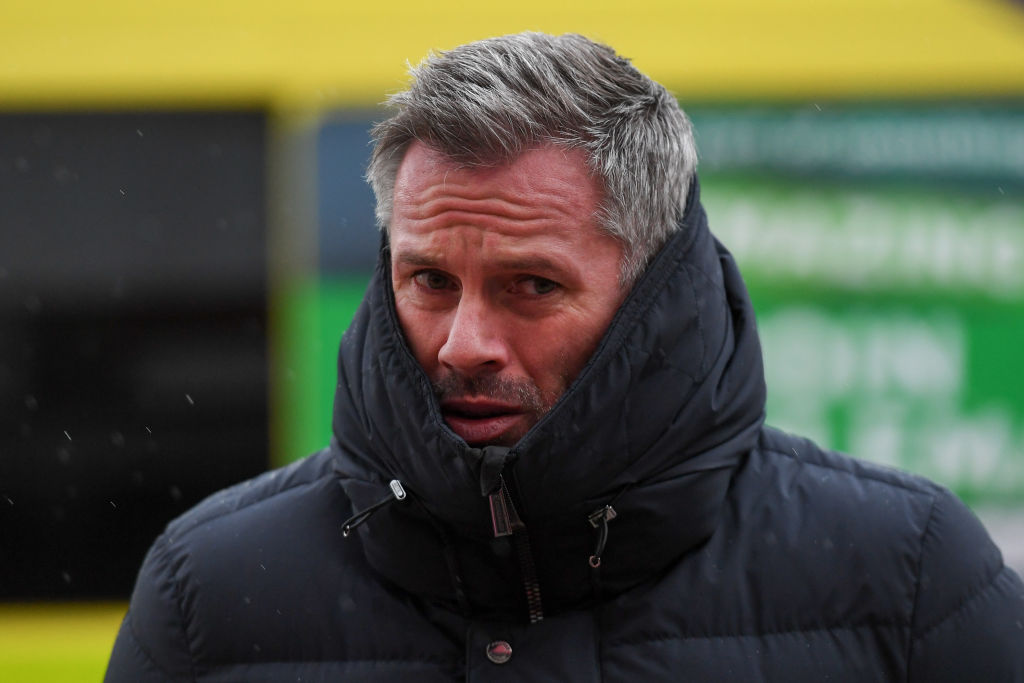 Man City closed the gap on Premier League leaders Arsenal to five points with a 1-0 win over Chelsea on Thursday night.

Pep Guardiola’s side have been the dominant force in England in recent years – lifting four league titles in five seasons – but look set to be pushed all the way by an Arsenal team who have won 14 of their 17 league games this season.

After a goalless first half at Stamford Bridge, Man City asserted their dominance after the introduction of substitutes Jack Grealish and Riyad Mahrez.

The duo, who cost £160m, combined to score the decisive goal against Chelsea and Carragher believes the respective bench strength at Man City and Arsenal is the ‘huge difference’ between the sides.

Arsenal’s lack of depth was raised as a concern after Mikel Arteta’s side were held to a goalless draw by Newcastle United earlier in the week.

‘There was criticism of Arsenal the other night [against Newcastle] about having nothing from the bench to change the game,’ Carragher told Sky Sports. ‘That is the big difference when you look at Manchester City.

‘The difference between this [the Man City bench] and what we saw at Arsenal was huge in terms of the quality they can bring off the bench. That’s the reason City beat Chelsea.’

Arsenal are looking to bolster Arteta’s squad during the January transfer window, expressing interest in the likes of Mykhailo Mudryk and Joao Felix.

Ex-Gunners striker Ian Wright has urged his former club to strengthen the squad this month, telling BBC’s Match of the Day: ‘It is something I am sure they are looking at.

‘It was a like-for-like substitution when you are looking to nick a win and go 10 points clear.

‘You can’t take anything away from them at the moment – they still played well, they attacked and did well – but Newcastle have to get credit for the way they defended.’

Asked about Arsenal’s transfer plans earlier this week, Arteta said: ‘We have what we have. We have some injuries as well and attacking areas we don’t have that many options but it is what it is.

‘That’s something we always try to do; to improve our team in every [transfer] window is important.’

Foursome display proves Sydney FC are the team to beat