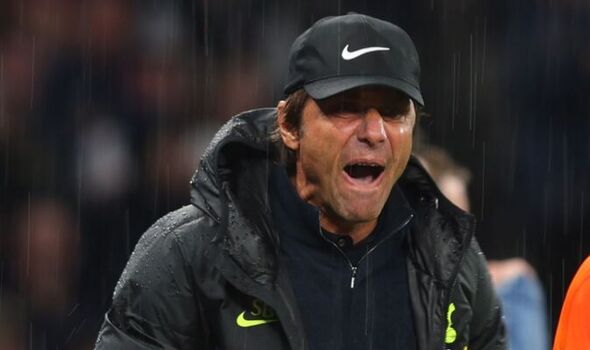 Jamie Redknapp believes Antonio Conte’s contract situation is a growing issue at Tottenham as the Italian highlighted that Spurs are on a long-term journey following the 2-1 defeat to Newcastle. Goals from Callum Wilson and Miguel Almiron gave the Magpies a 2-0 lead at half-time before Harry Kane pulled one back for the hosts, who failed to wrestle level as Eddie Howe’s side recorded a statement victory on the road.

Speaking after the game, a deflated Conte declared that patience is required if Tottenham want to compete with the Premier League’s elite, seemingly suggesting his side are not yet ready for a title challenge.

He told Sky Sports: “You have to understand that in a process – I always say previously, not now – that we have just started the process.

“If someone doesn’t want to listen, it’s not my problem. In my experience, we have to show patience. We are lucky with this group of players but it’s not enough.

“We have to continue to work. Fingers crossed we don’t have many injuries because injuries can affect our season.”

Redknapp, though, finds the comments somewhat concerning given Conte seems reluctant to show that he’s on board for the long haul.

The former Chelsea tactician has a track history of short stays and now the ex-Spurs midfielder is worried Conte may not be willing to stick it out in north London.

“I do find it fascinating what he’s saying there because he’s talking about the process but he’s only got until the summer – when his contract ends,” he said in the Sky Sports’ studio.

“If he’s a manager who works in short bursts. He goes into a club, for three years, wins and goes somewhere else.

“It’s not an easy conversation to have but if you talk about a process, if I’m a player there you want him to show that he’s going to be loyal and be part of the process.

“Normally with managers, somebody of his ilk, would have signed up by now. It’s a strange situation with the World Cup, the season is going to be over very quickly.

“You need to tie this up so you can talk about the players that he wants in. Harry Kane has only got 18 months left on his contract. These are really important factors, you certainly can’t have Harry Kane leaving or the manager leaving.

“I did find that was a very telling interview. What he is saying if we lose a couple of players we are short. But so are other clubs.”

Newcastle are now just two points behind Tottenham after moving up to fourth place in the Premier League table.

The Magpies now boast the best defence in the division after only conceding 10 goals in 12 outings.

Howe’s side have tasted defeat just once during that run and now they are knocking on the door in the race for Europe this season.

Tottenham sit third with 23 points after their perfect home record went up in smoke.

Nottingham Forest confirm their NINETEENTH signing of the summer

Cassano claims Ancelotti has been 'lucky' in the Champions League