‘In the bad periods I bottled up so much that I resorted to drinking to ease the pain’: Jesse Lingard opens up to JAMIE REDKNAPP about the ‘2.0 project’ that saw him return from mental health struggles and thrive in West Ham renaissance

Jesse Lingard wants to tell his story. Joined by his brother, Louie Scott, and Alexandros Alexiadis, coach of Greece’s Under 17s, the trio are here to explain ‘Project Jesse 2.0’. It was March 2020 when they masterminded a plan to resurrect not only Lingard the player, but Jesse the person. He was in a dark place.

There is only so much social media abuse a man can take and his season had amounted to just two appearances for Manchester United. He didn’t want to leave his home for fear of being recognised and considered a move to China or Saudi Arabia, away from that spotlight of scrutiny.

Thankfully, with Louie and Alex’s support, he remained in England, where a loan move to West Ham saw the ‘2.0’ project pay off.

Here, Sportsmail‘s Jamie Redknapp speaks exclusively to the England international as he enters a new season in which he intends to show United what they’ve been missing. Kieran Gill listened in… 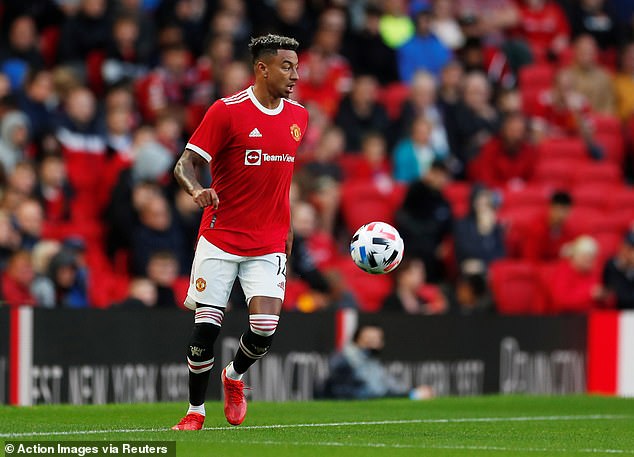 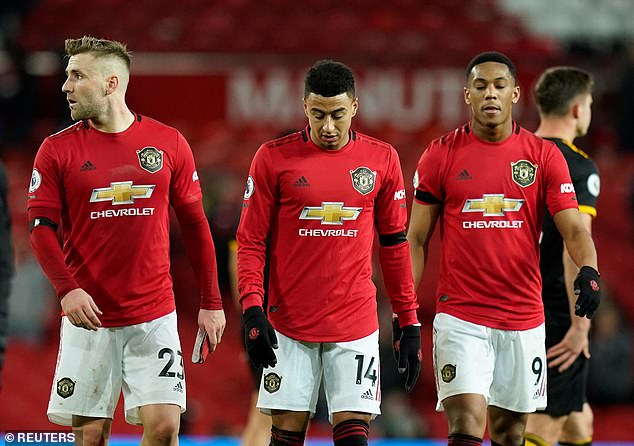 JESSE: My confidence was shot. You can be that happy-go-lucky guy, bouncing around the training ground, but deep down you’re wearing that smile as a mask.

I wasn’t playing so I was down. Luckily I had Louie sending me videos from my Under 21 days for United and England. He was trying to make me realise what a good player I’d been.

‘Watch this! Watch this!’ So I did and thought, ‘You know what? I can’t throw this away’. It gave me confidence, and that first lockdown gave me a chance to re-evaluate what I wanted in life.

JAMIE: What was it like seeing your brother this way, Louie?

LOUIE: I’ve watched this kid all my life. There were matches where I had to leave because I knew he wasn’t right and I felt helpless. You know when you see a boxer on his last legs, ready to be knocked out? That’s what I was seeing and at the same time, the vultures came for him. 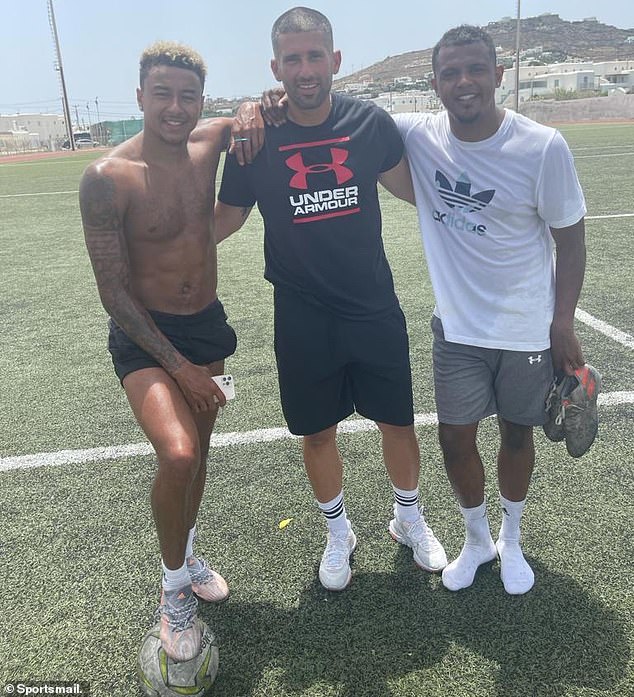 They were picking away. There was a lot of online abuse. I don’t look at Jesse as someone to analyse, or someone who needs a new contract. I’m his big brother. I needed to make sure this kid could go on and live his life. He didn’t want to go fill up his car with petrol as he didn’t want to go out. I felt powerless.

JESSE: I was like that on the pitch. The game was passing me by. I felt like I wasn’t there. I was bottling things up and not telling anyone what was going on.

But I remember watching one of the first videos Louie sent me. I rang him straight away and was like, ‘Yo! Let’s go!’ I decided I wasn’t just going to sit around. I told him: ‘I’m not going anywhere. I’m going to fight and we’re going to do it.’

LOUIE: It was a video of him playing for United’s Under 21s. He picks up the ball, beats two players, cuts in and whips it just over the top corner. This kid was 4ft 5in in the Under 21s, taking on opponents who were 6ft, beating them, creating.

When I saw that, compared to what he was doing in the United first team, it was chalk and cheese. So it was about hitting that reset button. That’s why I was sending him those videos: to remind him of what he could do. 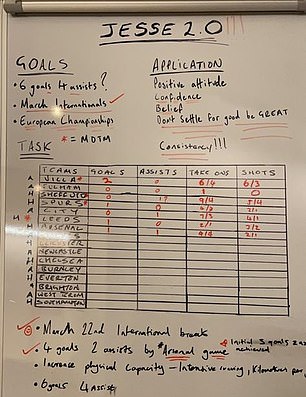 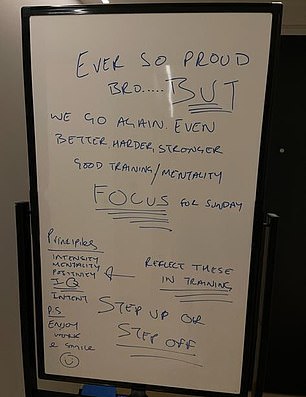 Louie used this whiteboard as motivation

JAMIE: You got so much stick for your ‘JLingz’ clothing brand, as if you were the first footballer to invest in a venture.

JESSE: I remember the weekend I launched my brand (in December 2018). We beat Fulham. Then the following weekend, we lose away to Liverpool. Suddenly it was: ‘Why did you launch your brand the week before such a big game?’

It had nothing to do with that. That was never going to affect my performance. I don’t run the brand. I’m not packing clothes to ship out before a game.

LOUIE: ‘He’s got a brand, he’s distracted…’ I do all of that! I take care of the brand side of things. That’s not Jesse’s job. We decided not to say anything. We left it and agreed one day we’d say our piece.

I’m telling you right now: you will not find a player from all of Jesse’s years at United who runs more than him. Talent doesn’t make you run 12km a game. It comes from within. He is a total professional.

JESSE: At my lowest point, I was thinking, ‘I need to get away from England’. Not to Spain, but to China or Saudi Arabia, somewhere to stay out of the limelight and only concentrate on football.

When lockdown came, I wanted to use that to put all of the pieces of the puzzle together and then show people what I could do.

We had Alex on board and he was giving me an analysis of every upcoming opponent of United’s, just in case I played. I didn’t get the game time I wanted but eventually we got the move to West Ham and that was perfect.

ALEX: Just before Jesse went out on loan, I asked Louie: ‘Do you believe your brother will play for England again?’ I already knew the answer. It was yes. But the point was to give them that extra motivation and a future target. It was a new start. I saw that Jesse and Louie wanted to succeed and that was the point.

JAMIE: Two decades ago, we had a player at Liverpool called Igor Biscan and he decided to bring in his own fitness coach. Some of the lads were saying, ‘What is he doing?’ Now I realise it was a glimpse into the future! 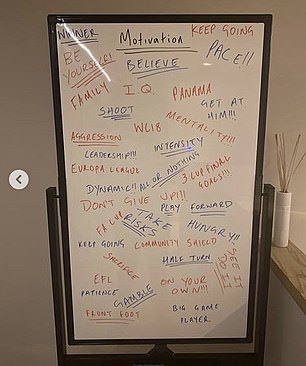 Players can hire their own coach — someone who will be honest and feed you the individual information you need. Kudos to you for committing to that.

JESSE: I’d never had that at home before. It really helped.

The West Ham loan deal was confirmed on January 29, 2021. Lingard wanted to face Liverpool on January 31 — a chance to show what he’d been working on in private, with Louie and Alex — but wasn’t registered in time.

He debuted against Aston Villa on February 3, scoring twice, and impressed enough to be named in Gareth Southgate’s England squad in March. Yet that loan from United to West Ham wasn’t without its complications.

JESSE: I spoke to Ole Gunnar Solskjaer at the start of the season and said: ‘If I’m not going to get any game time, I need to go on loan.’ We agreed to discuss it in December. I’d started two games so I said: ‘Boss, I need to go.’ He agreed.

There was Newcastle and West Brom, but then my dad got a call from David Moyes at West Ham. He said: ‘When I was at United, I let your son go out on loan. It’s time to repay the favour.’

I spoke to him and we tried to get a deal done. It was off, then on, then off, then on. It was a rollercoaster. Me and Louie were crying one time because it was off. Then it was on again, so we flew straight down and got it over the line.

JAMIE: Your debut against Villa, you start and score twice. To think at one stage, you wanted to escape to Saudi Arabia. Now you’re rocking in the Premier League.

JESSE: When I wasn’t playing at United, I was still training like a professional. I wasn’t moping about.

I was doing my job, hoping for an opportunity, and by the Villa game, I was raring to go. I was just happy, you know? When you get a happy Jesse, a confident Jesse, you get results. 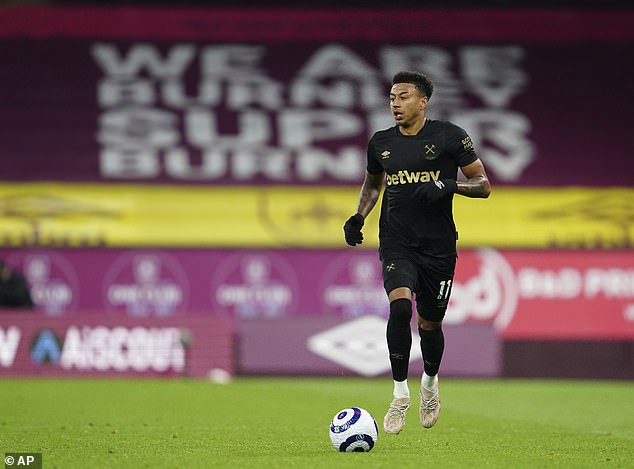 LOUIE: It wasn’t an overnight thing. I’ve known Alex for 10 years. We only had training sessions, a game against Luton, and 10 minutes against Brighton to analyse. But it was about setting Jesse up to succeed. Our mantra was ‘stay ready’ rather than just ‘be ready’.

When Villa came along, bang. We were ultra-confident he’d succeed because we knew what he’d put into it. We didn’t bring Alex in to start analysing games at West Ham and create pre-match and post-match video reports. We’d already been doing that for a year.

JAMIE: I’ve seen a picture of a whiteboard in your Stratford flat, Jesse, full of motivational words. Like ‘PANAMA’, the 2018 World Cup opponents you scored against. Or ‘TAKE RISKS’, ‘HUNGRY’ and ‘HALF TURN’. Was that your idea?

JESSE: My brother put it up. I woke up every morning and looked at the board. He’d write a new word each night and eventually it was all filled in. Words which meant something to us. ‘GET AT HIM,’ was one. ‘WC18,’ as a reminder of that tournament. ‘THREE CUP FINAL GOALS,’ to mark my FA Cup, EFL Cup, Community Shield finals.

Little things to reiterate what I’d done and achieved. The whiteboard was good. I’ll do it again this season. We wrote down a reasonable target of four goals and two assists by the March internationals and we did that. I was enjoying my football and when confident, I’ll believe I can score a goal or two a game.

JAMIE: Have you gone back to United a different player?

JESSE: I’ve walked back in full of confidence. I’ve come back from a successful loan, player of the month, goal of the month, going away with England. It shows how far I’ve come. I’ve been doing well in pre-season. Ole’s told me that himself. There’s not much more I can do than that.

JAMIE: Do you feel like you have changed as a person too?

Louie was looking at me and thinking, ‘That’s not my brother’. I’ve never been a big drinker, but I was resorting to that for my own peace. When I finally opened up and started speaking to family, it really helped. I owe it to them. 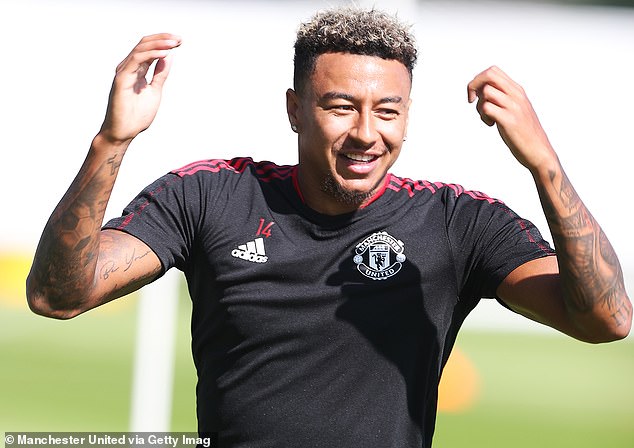 LOUIE: He’s in a better place now. As soon as he got back from Mykonos last month and was sent his roster by United, he contacted Alex. ‘We’ve got Derby. Tell me their formations, tell me this, tell me that…’

I’m thinking, ‘Analysis for a game against Derby in pre-season?’ But he’s back on it. He wants to be the best, whether it’s in a friendly or in the Premier League.

JESSE: I dread to think about what would have happened if you weren’t there. If I was here on my own, in lockdown, where would I be now?

Lingard will miss Saturday’s match against Leeds after testing positive for Covid-19 last Wednesday, but should be available against Southampton next weekend. His United deal expires at the end of this season. Talks have not yet opened over an extension but the 28-year-old is calm.

JESSE: I feel good. I’m hoping I can get back to training on Monday. The virus can get to your chest but I’ve been OK.

JAMIE: That’s good. I’ve got friends who support West Ham and when I told them I was speaking to you, they said, ‘Put a good word in, Jamie’. So this is me doing that.

JESSE: (laughs) It worked out perfectly. I couldn’t have asked for a better loan. I’ll always support West Ham. They’ll stay in my heart and I’ll retain that bond with them.

JAMIE: No chance of a cheeky return to Stratford?

JESSE: One hundred per cent. I’m not going to rush into anything. What comes will come. I feel like I’m in the driving seat. I’m happy.