Sir Kenny Dalglish won the double doing it in 1986, while Chelsea had success with a series of famous names in the role in the 1990s. But the player-manager is a rarity these days.

On the opening day of the Football League season no manager took to the pitch – interim MK Dons player-manager Dean Lewington was not among the squad for the game at Bolton.

What is it about being a player-manager that makes it so difficult?

Jobi McAnuff is the man to ask. He took charge for 16 games in League Two with Leyton Orient last season. Thrust into the job after Ross Embleton’s exit in February, he won six and he lost six.

“It came up out of the blue really,” McAnuff tells Sky Sports. “I was doing a bit of coaching leading up to that having taken a keener interest as I got older. So I had an insight to a certain degree. But when it is you in the hot seat it is a different kettle of fish.

“The truth is that until you do it, you have no idea. I learned so much about management and about myself as well. It changes your thinking. The player-manager role, in particular, is tough and I would not recommend it to anyone if I am being honest with you.”

Having played in the top five tiers of English football with over 750 career appearances, McAnuff had plenty of experience. It had not fully prepared him for this. He left himself out of the Orient squad for his first four games just to help focus his mind on the job. 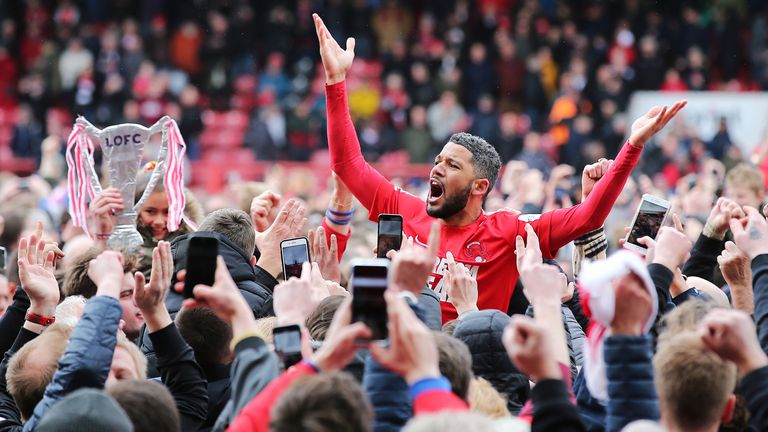 “I had to take a step back from the playing side in the short term because you need to put your own stamp on things. Particularly at a club that I had been at and knew all of the boys.

“It was really important that they saw me as the manager rather than just Jobi who they had played with and was now standing in for a bit. I was very conscious of that and wanted to create that bit of separation. That can pose its own challenges.

“You cannot be in that inner circle of the changing room. You just can’t. The day of the match is OK. But when there are lads having a laugh and a joke on the table and you are so used to being a part of it, you have to take that step back.

When Orient won only one of those first four games, McAnuff felt compelled to return. “Results dictated it. There was just a need to get back on the pitch. I got to a point where I was comfortable with that once the lads knew how I wanted to work.” 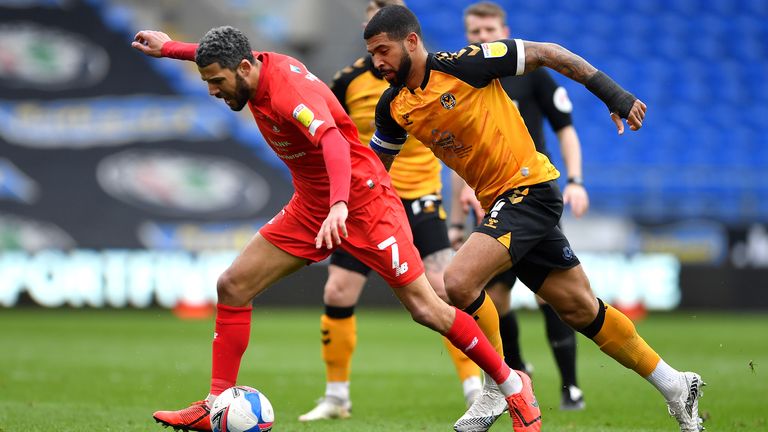 With the help of coaches Danny Senda, Matt Harrold and Dean Brill, McAnuff was able to find a rhythm that allowed him to play. “For the day-to-day training it was a case of getting across what I wanted to do and then just getting on with playing in the session,” he says.

“But I did find that because I was so focused on the management thing, it is practically impossible to give it absolutely 100 per cent focus on the playing because I was thinking as a manager. I do think that my form suffered on the pitch so it was not an ideal situation.

“Matchdays were generally fine. Once you have drilled the team and done your preparations, the Saturday should take care of itself. It was more the build-up, the preparation and analysis in the week. It was a challenge mentally rather than physically.”

However, there were some practical difficulties. In particular, the challenge of giving the half-time team talk after just playing 45 minutes of League Two football. “There were a couple of times when I was blowing a little bit,” he says, laughing.

“At 39, you want to focus on your game. With all that adrenaline, it is hard to get that balance between being in the moment and taking that step back that you need as a manager. Trying to remain calm and have that emotional detachment is important.

“You cannot be caught up in an incident or a penalty decision. You need to see the bigger picture and give the best advice, while still performing. You may need to change a game or see a game out with a substitution. That was the biggest challenge on the day of the game.”

The problem for the player-manager is that performing at the weekend is just one part of the job. The other six days of the week are every bit as demanding.

“You can never switch off. There is always something that needs doing. I cannot speak highly enough of the support I was given, but ultimately it is all on you. They are your decisions. Everyone can have an opinion but you are the one who has to make that call.” 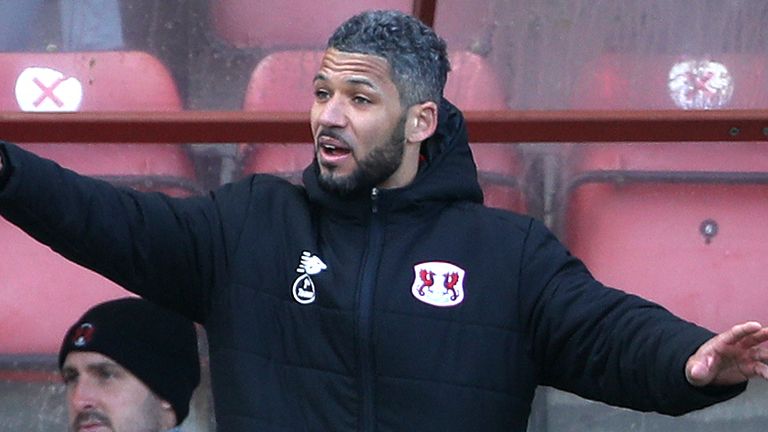 When the rest of the squad are relaxing after a game, the hard work for the player-manager begins again. The modern player expects to have a closer relationship with the manager and the modern manager knows this is the most effective way of maximising performance.

“You need a personal connection with players to get the best out of them on the pitch. I certainly wanted to do that because the managers I have enjoyed working with took the time out to make sure I was doing OK as a person too as well as a footballer.

“I wanted to do that but it did mean lads calling me on Sundays.”

It is not that McAnuff wanted his own downtime. The problem was that he was already busy preparing for the next game. “I would be watching the three or four last games of the next opponents and the first chance to watch their last game is on the Sunday morning,” he says.

“I would do that first thing on a Sunday and then speak to the analysts about what our plans are for the Tuesday game. You would try to have a bit of family time, of course, but you are soon on to the Monday morning. Who is fit? What issues do we need to address?

“It is very consuming. My wife is incredibly supportive and my kids are at an age where they understood the change of situation. It was more about me putting it on myself.

“As a footballer, you would normally be done by 2pm or 3pm in the afternoon. Instead, you are home at 6pm and even when you are at home you cannot relax. Our owners were based in the States so you are dealing with the time difference, calls late at night.

“You think it is all done and something pops up. Maybe you rethink your formation or you want to do a little bit more research on an opposition player. It never ends, it is so intense.”

On the forthcoming EFL season on Sky Sports

“I think the education around coaching has come on leaps and bounds. It makes for good football and you can see that in the EFL. The Championship, in particular, is like a mini Premier League now.

“What fascinates me this year are the managerial changes because the key is going to be how quickly those new managers can establish their way of playing through little tweaks.

“Valerien Ismael, in particular, at West Brom, that is a complete change of tact in terms of how he wants to do things. How quickly can he get those boys to buy into that?

“Scott Parker going in at Bournemouth, Sheffield United with Slavisa Jokanovic coming back, a successful manager at this level. Contrast that with the older school Mick McCarthy, Chris Hughton and Neil Warnock, managers who have been there and done it with a more pragmatic style.

“That is what makes the Championship so entertaining.”

Having been 14th when appointed, McAnuff had Orient up in ninth by early April, just a point outside of the playoff places but could not quite maintain that form over the closing weeks as promotion hopes faded. He was not offered the job permanently.

“I would have loved to carry on at Orient but the decision was made that they wanted to go in a different direction,” he explains. The opportunity to continue playing was there but he felt the time was right to stop. “I wanted to go out in a good place,” he adds.

“It was nice that it was on my terms. I feel like I could have played another season but I just got to the point where I wanted to have a break physically and mentally. It is a great job and one that I feel very privileged to have done for as long as I have but it is very demanding.”

For now, it is time for a new adventure. McAnuff was part of the Sky Sports team when the EFL season kicked off as Bournemouth hosted West Bromwich Albion on Friday and will be back on duty next week when Leyton Orient face Queens Park Rangers in the Carabao Cup this week.

On Leyton Orient vs QPR, live on Sky Sports

“I am looking forward to the game. As a pundit, it is great that I can speak to people at Leyton Orient and get that across to the viewers, hopefully giving them that insight. That is my job now and I want to be as good as I can be at it.

“There are a lot of good young lads at Orient who I am looking forward to seeing progress, guys I have worked with who are really big talents so I hope they can kick on.

“I know what it means for a club like Orient to play a Championship club like QPR. I am sure everyone there will want to give a good account of themselves and have a real good season. It is definitely one I am looking forward to.”

“The best thing about it is that it will give me the chance to get around some clubs. I am very fortunate to have a lot of contacts in the game so I will be looking to keep one eye on the coaching side of things and continue my education and development on that side.

“It is important for me to keep on top of current trends and themes for my own education but also for my work with Sky so that I come to work prepared and up to date.

“A lot of it goes hand in hand with it in terms of the analysis. I am used to doing the opposition analysis for the boys, breaking down games, patterns, which players are posing a threat. Hopefully, I can transmit that to the viewers. I am really looking forward to it.”

The ambition to manage is still there, however.

“There is nothing better than getting a whole week of training right, preparing, doing the analysis, breaking teams down tactically and then setting your team up to go and win a game of football. There is a buzz that gave me that was similar to scoring a goal.”

But if there is a next time, there is just one thing that Jobi McAnuff would change.

“It was a situation that came up that was too good to turn down and I tried to make the best of it. In hindsight, what I would have loved is to have had a crack at it just as a manager.”