Home » Soccer » Jones Knows: If the Premier League season is void – how would the odds look? Where would your imaginary £50 go? If the Premier League is declared void and we start afresh, what would the betting markets look like? Jones Knows offers some odds and gives you an imaginary £50 to spend.

We’ve all be guilty of letting our imaginations wander in over the past two weeks – mine has been no different.

After the decision to expunge results for the 2019-20 season for non-League divisions below the National League and National League North and South, the thought of the same happening to the Premier League has crossed my mind.

The Premier League season is declared null and void.

The authorities have declared that we’re all set to kick off tomorrow with the same teams that started the 2019/20 season. Everything that has gone before between August and March vanishes from the history books and clubs will set off on the new season with their current squad and manager.

This means all of us of a betting persuasion will be ready to feast upon the ante-post markets and try and sniff out some value.

But this would be a unique situation, wouldn’t it? As we’ll be conjuring up our opinions with the caveat that theoretically we already know what’s going to occur as we’ve already played the majority of this season. Liverpool will run away with the Premier League, Tottenham and Arsenal will take huge steps back and Norwich will prop up the table.

How would you assess Sheffield United’s chances of repeating their top-four push? Can Leicester kick on after charging into the elite this season? Who would you back to go down?

With bookmakers currently suspending all their markets, Jones Knows has taken time out from his not-so-busy schedule to create a pop-up fictional bookmakers called Jones Knows Bet and created ante-post markets in the event that this season would be void and we’d have to do it all again.

Of course, these are all hypothetical markets. I can’t lay you a penny.

The pre-season prediction chat is one of my favourite times of the season and in these current football-free times, I wanted to create a bit of that buzz that usually gets many of us revved up. Or at least create a few moments of distraction from the current realities of our strange world.

As you scroll your way down the page, keep in mind that I’ll be giving you an imaginary £50 to spend across the four markets. Where does the value lie? What price has got your punting juices flowing?

Tweet me your staking plans – maximum four selections and you don’t have to include every market. I’ll review the most popular selections and give a few shout-outs in next week’s column. 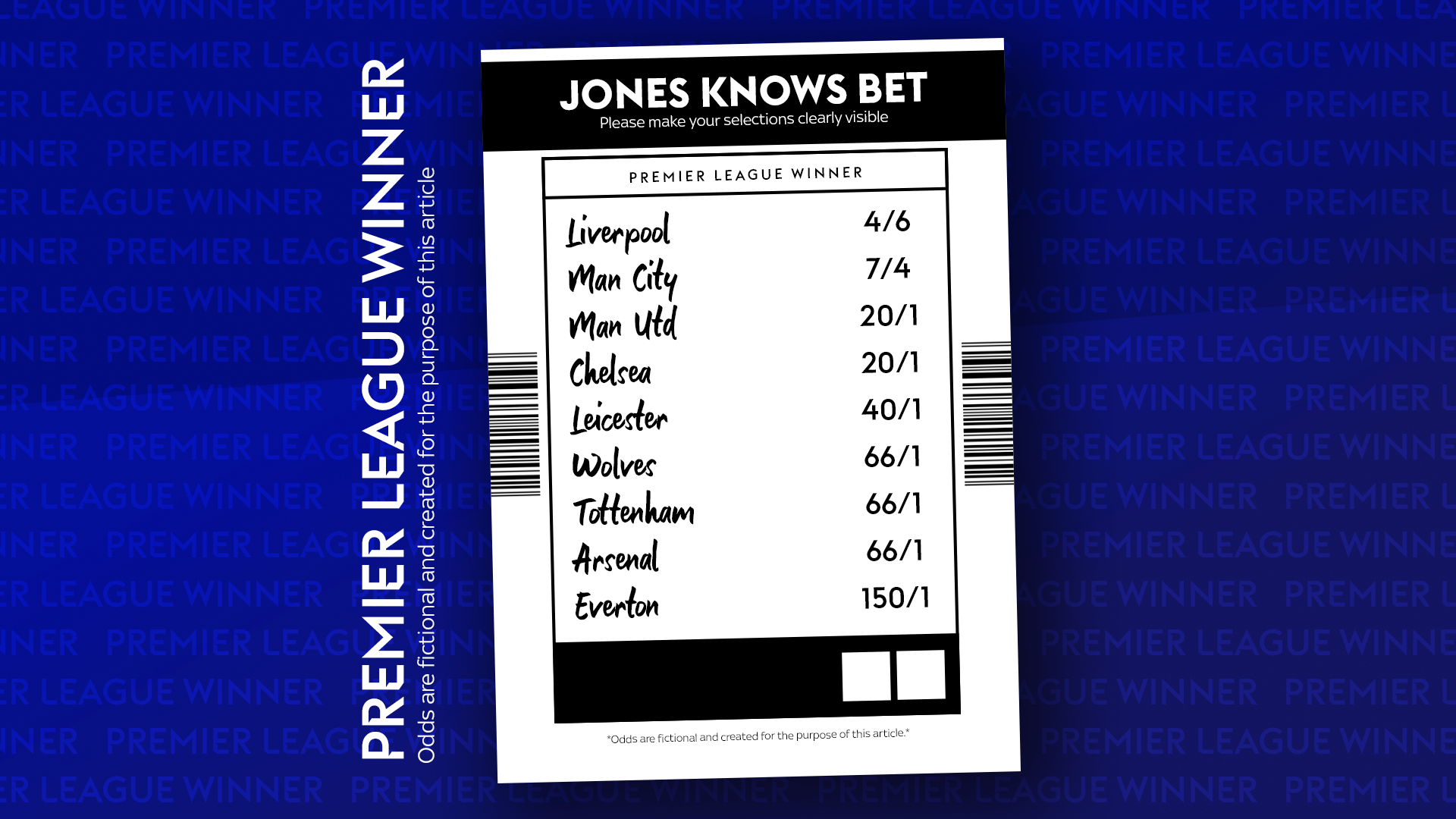 This is a two-team book.

My calculations deem that there is a 96 per cent chance that either Liverpool or Manchester City will win the Premier League if it was to restart from scratch. The way this market is shaped is a complete role reversal to the way it looked at the start of the 2019/20 season with City then 8/13 favourites and Liverpool available at 9/4 before a ball was kicked.

The 29 per cent swing in favour of Liverpool in the market with my pricing is based on their obvious ruthlessness at winning matches, reliability and defensive brilliance. Also, you have to factor in the current question marks surrounding Pep Guardiola and some of City’s key players due to the potential European ban. What price would City be if Guardiola or Kevin De Bruyne left? You could certainly double that 7/4, at least.

City do however remain a seriously frightening team, packed full of match winners. Interestingly, using Opta’s xG (expected goals) data they sit top of the Premier League when analysing all the metrics – above Liverpool!

And although I’d favour them to beat Liverpool over 90 minutes at a neutral ground, Liverpool remain an all-round stronger team when it comes to long-term performance in a league situation. They have to be favourites.

TRADER’S VIEW: Robert Carr, Sky Bet Football Trader, writes: “Should the season be void and restart tomorrow, the 4/6 Liverpool and 7/4 Manchester City look too far apart to me. It’s admittedly tough to avoid a ‘recency bias’ when a quick glance at the current league table shows such a significant gap between the two sides, but City’s shot data is still at a different level this season and the absence of Aymeric Laporte has had a serious impact on their defensive solidity.

“Liverpool have again managed to keep players fit all season and win the games which could have gone another way. I’d be much closer these two in the market, maybe even a classic pick ’em, so I’d back City at the prices on offer.” 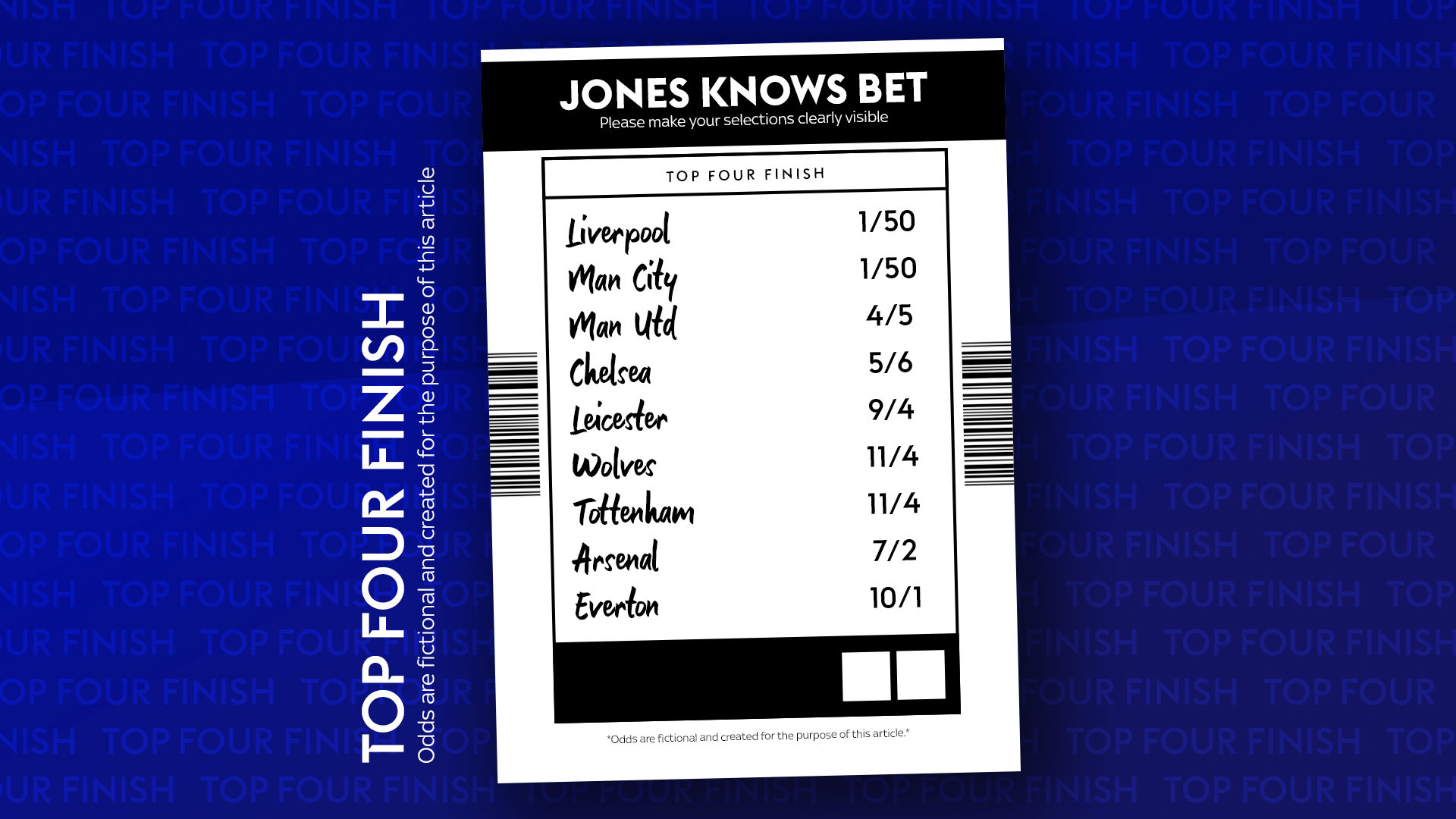 With Liverpool and Manchester City near certainties to finish top four, this market is a race for the two other spots, leaving a very congested and competitive race involving seven realistic candidates. Sorry, Sheffield United fans.

I’ve just about favoured Manchester United to head the market due to their improving characteristics. Since losing to Burnley in January, United have gone unbeaten in five matches, including beating Manchester City 2-0, and have conceded just one goal along that way.

The introduction of Bruno Fernandes and potential return of Paul Pogba also were factored into their price. Chelsea are bound to keep on kicking under Frank Lampard after a slight over-achievement on what was expected and the 5/6 would shorten significantly if they were to splash some cash and convince a player like Jadon Sancho to join.

The graph below shows the teams odds at the start of the season compared to my odds, converted to a percentage to show the difference. The percentage shown demonstrates the difference in probability according to the market about the chances – in this case – of making the top four compared to first day of the 2019/20 season. 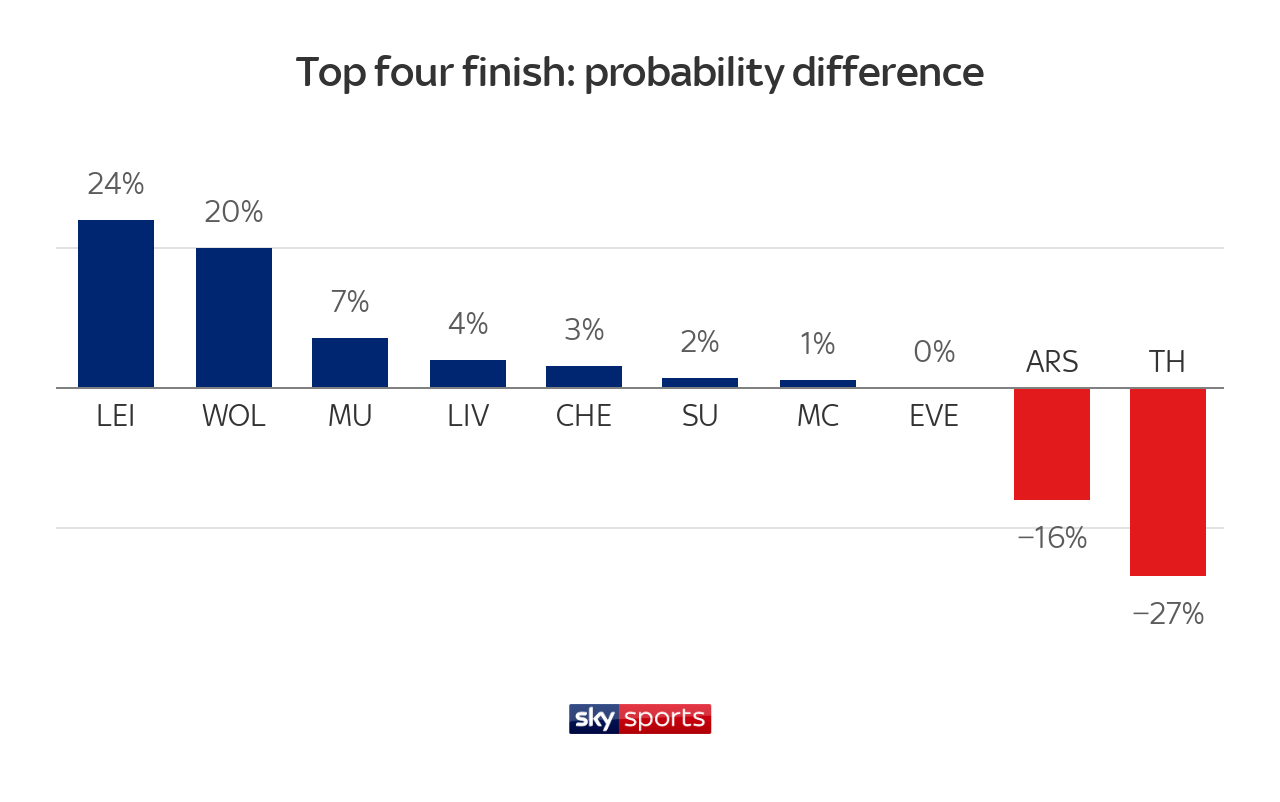 The big take out from this has to be the rapid decline of Tottenham and to a lesser extent Arsenal. Spurs went into the start of the 2019/20 season odds-on to make the top four (4/7) but according to my prices are a 11/4 shot under Jose Mourinho to finish in that position if the season was to start again tomorrow, meaning they are 27 per cent less likely to finish in the top four if my prices are somewhere on the money. Sounds about right though, doesn’t it?

Arsenal also have suffered a drop-off, from a price of 13/8 to 7/2 – showcasing a 16 per cent less likely probability of securing a top-four finish.

TRADER’S VIEW: “This is a very interesting challenge to price given the current struggles of an injury-ravaged Tottenham, an Arsenal side that have been woeful on a lot of metrics this season before and after the appointment of Mikel Arteta, and inconsistencies shown by Chelsea and Manchester United.

“This has opened the door for a team like Wolves who have shown remarkable consistency, despite competing in Europe with a squad many worried was too thin in pre-season. I’d have Arsenal a bit shorter than 7/2 though and think United look a little short at 4/5.” 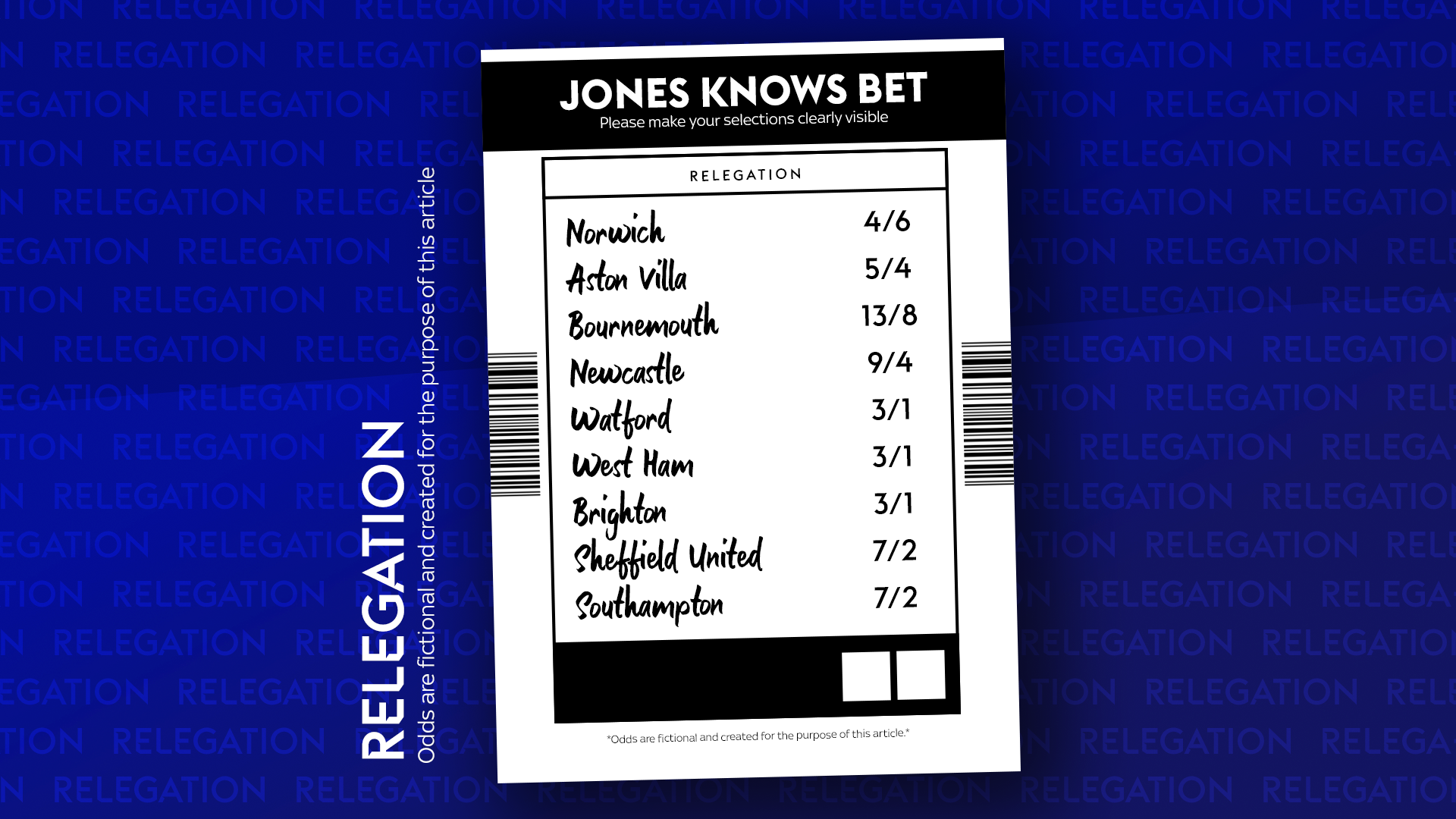 When assessing the relegation picture, it certainly seems the current Premier League table doesn’t lie as the three teams filling the relegation spots are the top three in the market. Norwich, Aston Villa and Bournemouth would be the most likely candidates but I’m sure they’d be plenty of punters out there willing to look elsewhere at bigger prices as all three of those teams have shown at various points that they carry Premier League quality within their ranks.

Again, the graph below shows the teams odds at the start of the season compared to my odds, converted to a percentage to show the difference. The percentage shown demonstrates the difference in probability according to the market about the chances – in this case – of relegation from the first day of the 2019/20 season. 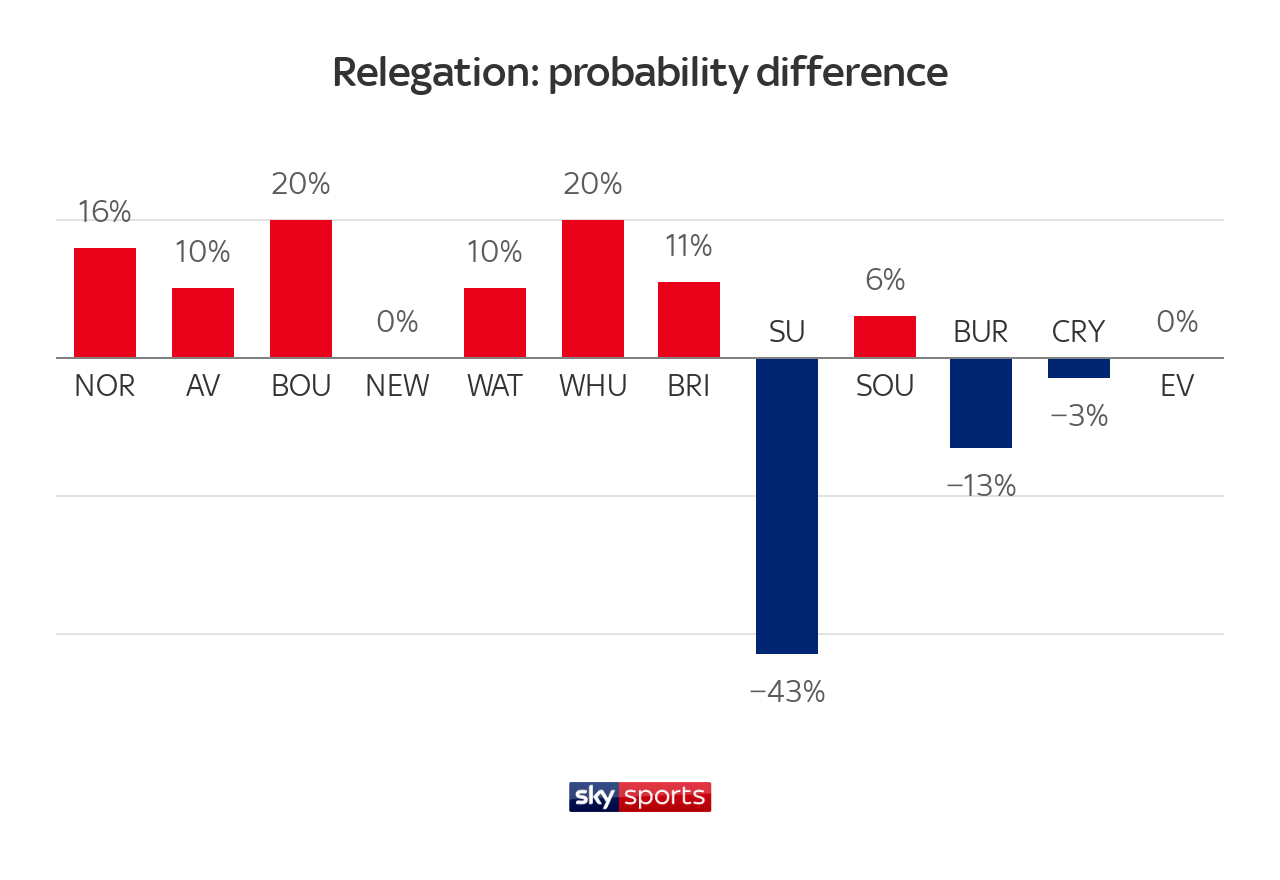 The big winners here are certainly Sheffield United, who were favourites at 8/11 to suffer the drop at the start of the campaign but are now 11/2 according to my revised prices. That is an absolutely monstrous swing in probability equating to a 43 per cent less chance of them getting relegated, further underlining the brilliant job Chris Wilder is doing at Bramall Lane. Burnley (13 per cent) and Crystal Palace (three per cent) are the only other teams to have increased their probability of staying up.

Bournemouth and West Ham are the two with the biggest negative swings. Both teams were unfancied in the relegation markets at the start of the season with 9/2 available on the Cherries and a whopping 16/1 on the Hammers but would be popular to face the drop now.

TRADER’S VIEW: “The relegation battle was starting to look particularly interesting before the interruption of this season. Norwich look doomed, Aston Villa were 4/11 from a pre-season high of 9/4 and it’s seemingly between four others for the final spot.

“My eye would be drawn to a Newcastle price of 9/4 here though. Their data for chance creation and shot totals suggest they’ve overperformed this season, and I’d have them much closer to the head of the market to go down if the season started tomorrow.” 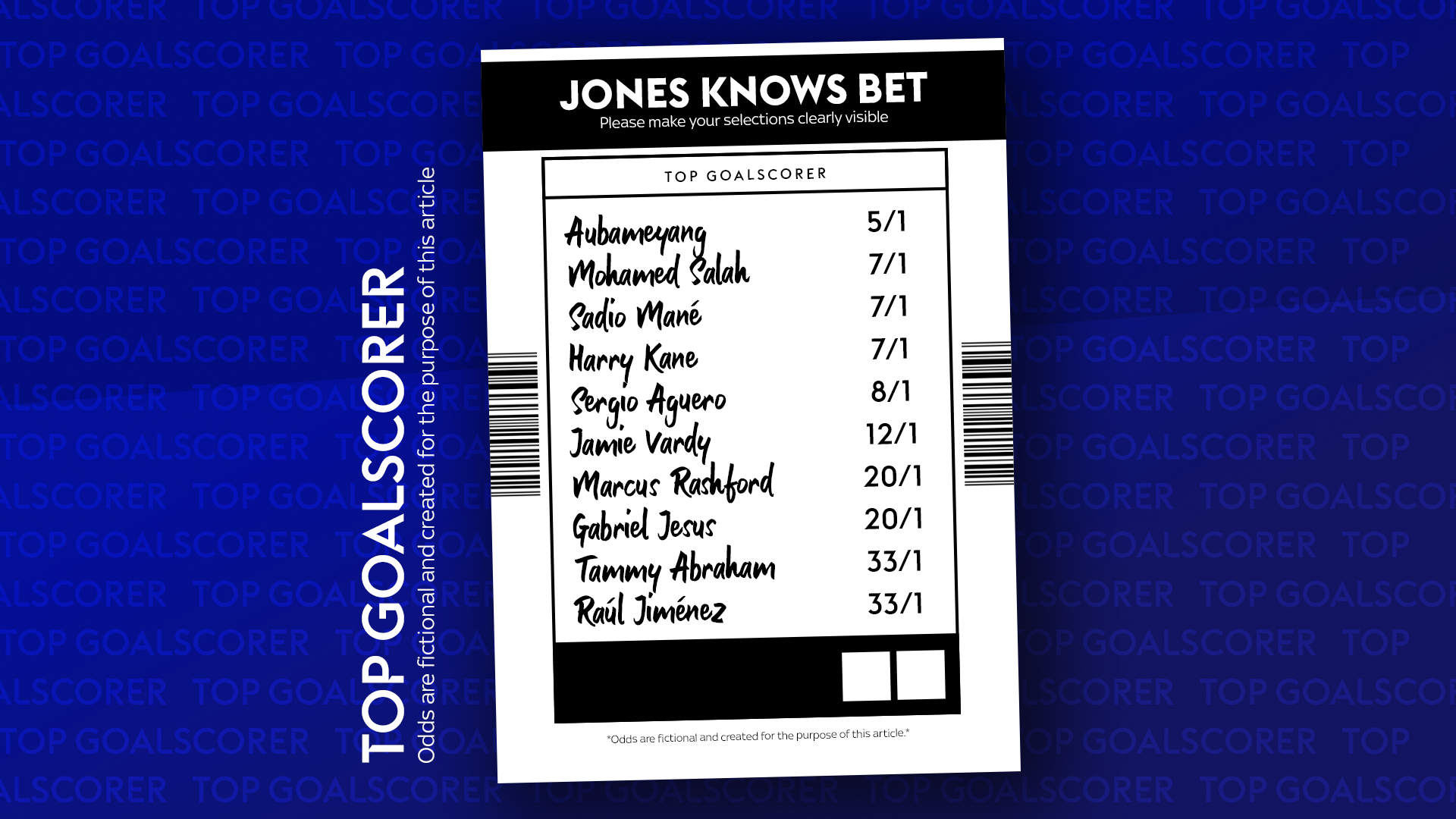 This was the trickiest market to price up but I came to the conclusion that Pierre-Emerick Aubameyang would be the one I’d back at any prices above 6/1 so I had to make him favourite. The Arsenal striker boasts a conversion rate of 36.17 per cent – the highest of any player with 10 or more goals this season – and has scored 17 goals in what is frankly a mediocre Arsenal team.

The Liverpool duo of Sadio Mane and Mohamed Salah are obviously huge players in this contest but Liverpool have a tendency of sharing out their goals which slightly reduces the likelihood of one of them becoming a Golden Boot winner.

Sergio Aguero will tempt many in at his prices but are his powers diminishing slightly? The rise of Gabriel Jesus would also put me off Aguero at short prices. Harry Kane would be favourite if he played for a stronger top four contender while the 12/1 about Jamie Vardy will surely see plenty of action as he’s leading the market this year with 19 goals.

TRADER’S VIEW: “The top goalscorer market saw Kane go off favourite this season, but he’s missed too much of the season with another lengthy injury to trouble the top of the charts. I’d look for a bit of each way interest here with someone like Raul Jimenez at 33/1, who has a superb injury record, scores a high proportion of Wolves’ goals and ranks high on shot data.”