Many thought Jonny Evans’ days in the Champions League had gone once he left Manchester United but now, with a sharp new lockdown haircut, he is ready to help Leicester realise their European ambitions

Three months without a haircut has harmed some of us more than others.

Jonny Evans put up with it for a while before placing matters in his own hands. Or his wife Helen’s to be precise.

‘Yep I shaved it off… all the way,’ Evans says, running his hand over his head. ‘I told Helen I had set the razor to No 3 but it was a zero really. All off. 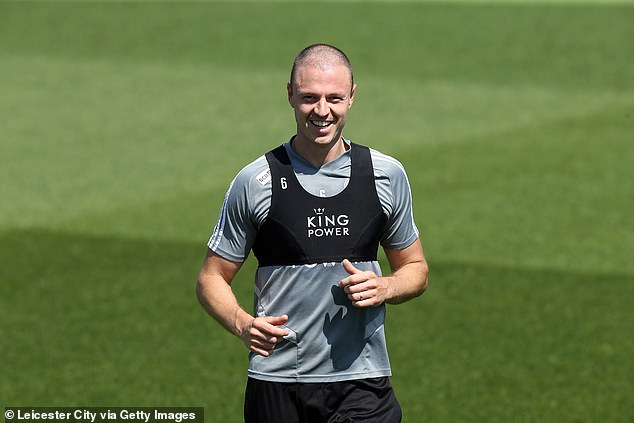 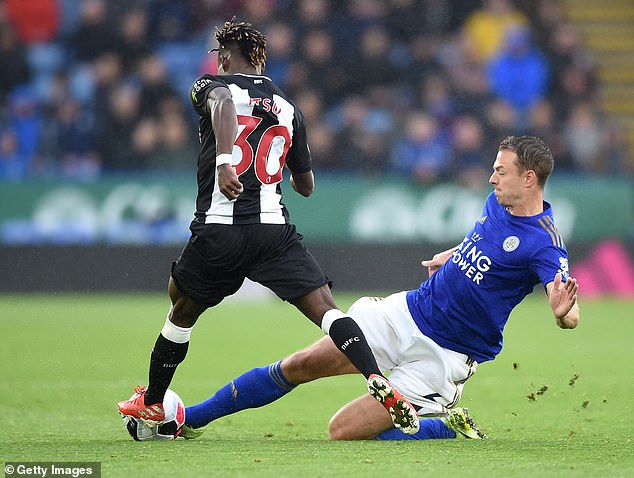 ‘She wasn’t happy but I put it in her hands so she is technically the culprit. It has started to grow back now anyway.’

Evans is 32 now but doesn’t look it. Despite his efforts to put on some muscle after arriving at Leicester from West Brom, he is still as rakish as when he came through Manchester United’s academy 15 years ago.

He remains instantly recognisable even if some of his Leicester team-mates may not be when they resume at Watford on Saturday.

‘Some of the boys have let their hair grow and I have seen a few Alice bands at training,’ Evans tells Sportsmail. ‘They say it’s the lockdown but I am not sure. Maybe it is something they have always wanted deep down.

‘Kasper [Schmeichel] was growing his hair before. James Maddison and Ben Chilwell have gone that way and Marc Albrighton has started to look like Boris Johnson, so the lads say.

‘It was Wilf Ndidi who spotted that one. Marc Albrighton the Boris Johnson lookalike.’ 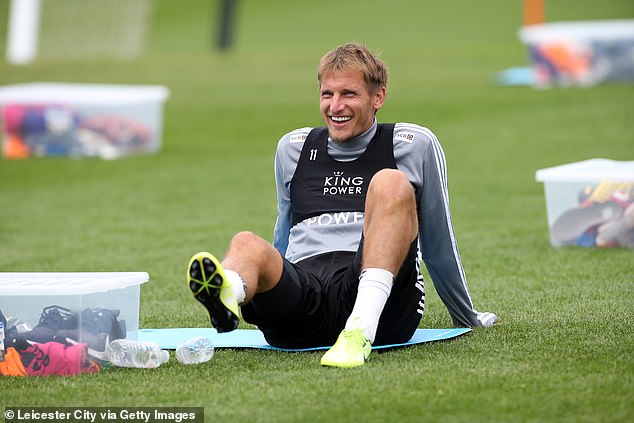 Unlike his famous double (TV will confirm or deny the accuracy of this on Saturday lunchtime) Albrighton and his team-mates may well be back in Europe next season. 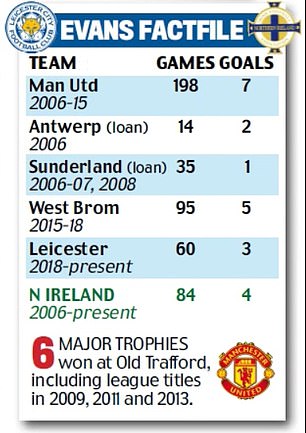 Leicester resume another progressive campaign in third place in the Premier League and would have to lose form significantly not to play Champions League football later in the year.

Evans has not played in Europe’s elite competition since featuring in a 1-0 win for Manchester United over Shakhtar Donetsk in December 2013. ‘I don’t actually remember that game,’ he says. ‘Who scored?’

Told it was his former defensive colleague Phil Jones, Evans smiles as he does when reminded that he was on the bench when United lost the 2009 final to Barcelona in Rome. ‘We were up against a decent side that night,’ he says.

Many would have thought his days in the Champions League had gone once he left Old Trafford but Evans arrived at Leicester two summers ago to find a club and a team spilling over with ambition.

‘It actually surprised me how ambitious they were here and how good the players were,’ he admits. 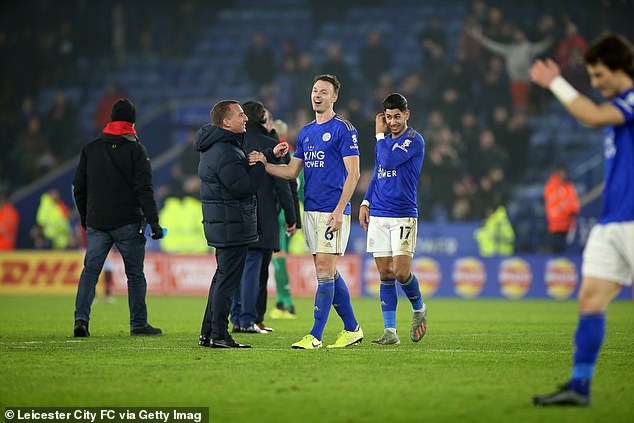 ‘They have surprised a lot of people with the style of football and the quality of players they have got. And I was one of them.

‘This place is so impressive. When they won the league that year you are looking from afar and thinking they must have something special there. But you don’t appreciate it properly until you arrive.

‘So yeah, the Champions League is the aim. We have put ourselves in a good position and it’s up to us to finish that off.’

Being in lockdown did not present Evans with the greatest challenge of the football season. That came late one night last December when Helen gave birth to their son Eli in the passenger seat of his car.

‘With two kids already I thought I had the experience but I was wrong,’ he recalls. ‘I didn’t know he would come that quick.

‘We left the house for the hospital at 5pm and he was born 12 minutes later in the car outside the A&E department. The doctors came running out but the baby was born before they got to us. They were buzzing as it hadn’t happened before. A friend who was a midwife had followed us in her car and luckily enough she was there.

‘Otherwise I wouldn’t have had a clue what to do…’ 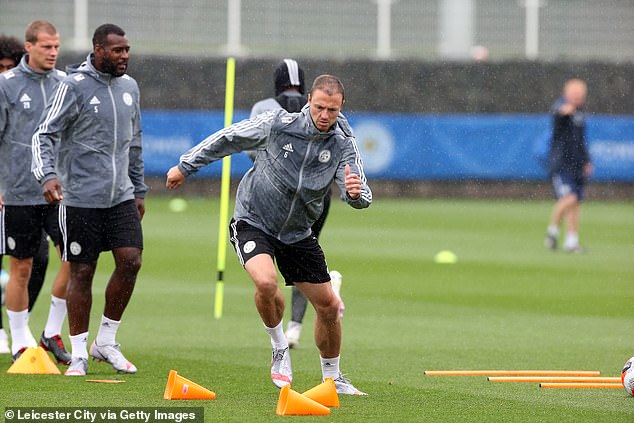 Unusually for a footballer, Evans has spent the last two or three months spending a lot of time with baby Eli. Now his life is once more spent on the road. Up at 6am to drive to training from his home in Cheshire and preparing to hop back on to the carousel of matches and away travel.

‘I have enjoyed the time at home on the whole,’ he says. ‘Most players will tell you that spending more time with the kids has been one of the benefits. It was actually hard going back to training as the kids didn’t want me to go.’

When football stopped back in March — Leicester’s 4-0 win over Aston Villa was actually the Premier League’s final game — Evans did his own bit of panic buying. While the country dashed out for pasta and toilet roll, the Irishman bought an exercise bike.

‘The first thing everybody thought of when we went in to lockdown was getting as much gym equipment as we could,’ he laughs. ‘I had some stuff already but there was some panic buying, yeah. I was also worrying about not being able to leave the house at all. I thought the lockdown may be extreme.

‘So I bought an exercise bike. To this day I have never been on it. I have been out running instead.’ 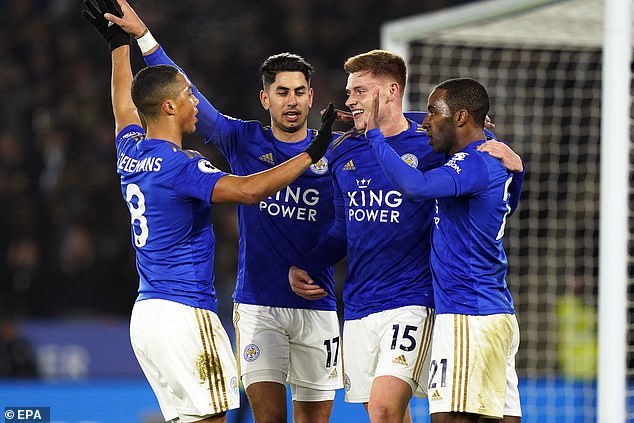 Evans has played twice in the past for Northern Ireland behind closed doors and is not overly fazed by the prospect.

He says he will rely on his sportsman’s competitive instinct to get him through.

‘That’s the biggest thing we have been talking about, obviously,’ he says. ‘What will it be like with no fans? Obviously we don’t know.

‘Some players will thrive and some may need the fans more. Personally I am just looking forward to playing. The training has been hard as there has still been no game to look forward to. But now you can feel the tension ahead of the restart. 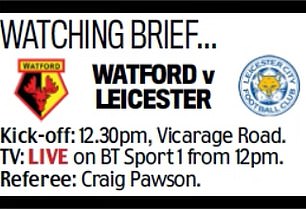 ‘I am looking forward to the adrenaline rush. We will still get that. We had a five-a-side round robin today and I got it from that, from being on the edge of winning and losing. It never leaves you.

‘That’s why so many sportspeople retire and immediately take up something else like running. They still need that buzz.’

It was arriving at Leicester and working with such hulking defenders as Wes Morgan and more recently the Turk Caglar Soyuncu that made Evans wonder about his own physique. Self-improvement has always been important to him.

‘And that still goes on,’ he nods. ‘As you reach your 30s you start to feel time is running out but I still feel I can add things on to my career.

‘I want to improve physically and as a footballer and how I read the game. If that didn’t interest me any more then it would be the day to hang up my boots.’ 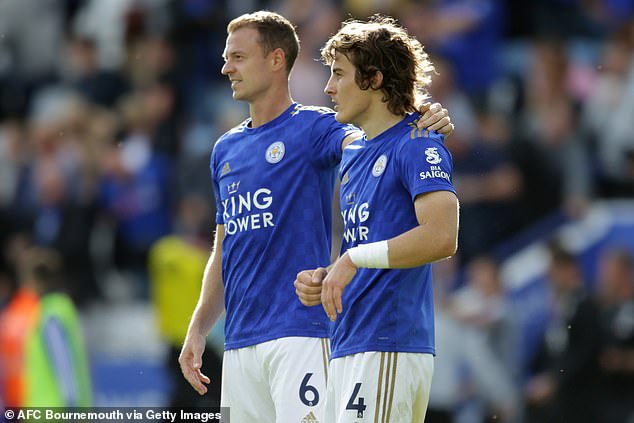 Not many footballers leave United and get better.

Chris Smalling may be in the process of bucking the trend at AS Roma. If so, his old team-mate Evans beat him to it.

Evans was 27 when he was sold by Louis van Gaal. The great Dutch coach thought he had better options which, as time has passed, has looked like an increasingly gross misjudgement.

Evans — who left with three Premier League medals and two League Cups — is not remotely interested in that argument. Instead he remains grateful for the lessons and habits learned at one of world football’s toughest schools.

‘I grew up around world-class players and am fortunate,’ he says. ‘Mentally it’s massive. People talk about pressure but it doesn’t come more pressurised than coming through at the biggest club in the world. I saw something Jamie Carragher said about young players that really rang true with me. When you break through young in England and go in to the first team [Evans was 19] you are playing in front of a worldwide audience and that is where you make your mistakes.

‘Whereby if you come to England, say, from abroad in your mid-20s you have already made your mistakes without the whole world watching. You are coming in as a complete player. 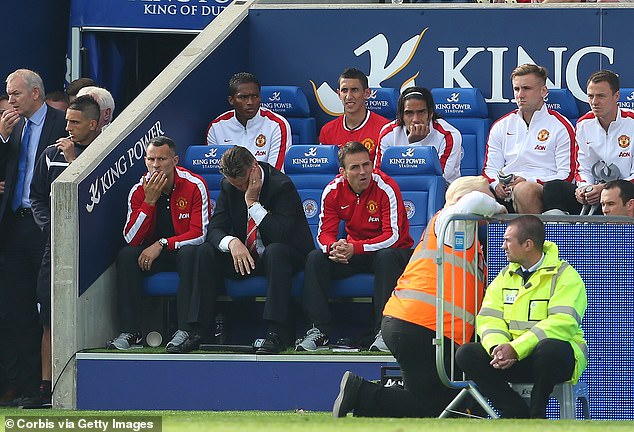 ‘I have experienced the first bit and it does toughen you up. There is nothing that can faze you more than playing for Man Utd and the expectations that come with that.

‘But it’s good. I have also played where there is no expectation and I can tell you that’s not enjoyable. I tried to keep my leaving in perspective. I was there a long time and it was my home. I had achieved so much by 27.

‘I am not sure what age Rio [Ferdinand] was when he joined [he was 23] but Nemanja Vidic was 24. By that age I had already spent a long time there. Even under Van Gaal I was learning different things in my last year. That’s what I like. It opens up your mind in life as it does in football.’

Asked if his ambition when he joined West Brom was eventually to return to elite level, Evans replies: ‘I am gonna say no. I simply always strive to get better. That was the challenge.

‘The view is that when you leave United you go down and down and I think it is possible that your motivation can drop. But I had a real determination when I left.

‘I thought there was plenty of time left for me to improve. West Brom was a good opportunity to experiment and see just how good a footballer I could be. I am still like that today really.’

Leicester’s background checks on Evans were rigorous when they signed him for an astonishingly modest £3.5million in the summer of 2018. Director of Football Jon Rudkin kept a file detailing all the defender’s performances in the Black Country. 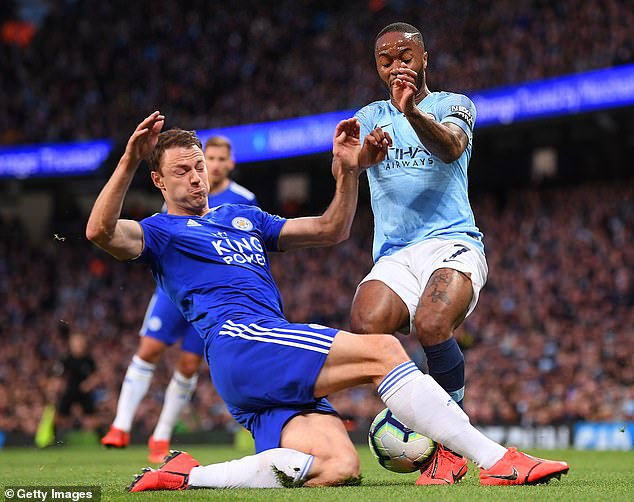 The marks were high, but Evans has kicked on again since then. Relishing the opportunity to mentor young Leicester players like Maddison and Harvey Barnes, he is another in a lengthening list of footballers to benefit from the tutelage of Brendan Rodgers.

‘I am constantly being called old by the lads,’ he laughs. ‘I don’t see it like that and I don’t feel that. But it’s refreshing to see the young players. They have no fear.

‘I know how difficult it can be to find consistency at that age but they are at a great club and Brendan is fantastic.

‘He calls a meeting and you always come out with something new to think about. You feel refreshed. He talks about hitting the emotional spot with people and it does work. You can see the improvement in the team since he arrived.’

The improvement in Evans has certainly been clear. Both Manchester City and Arsenal were keen when he was at West Brom — ‘Yeah, there were bids’ — and he would certainly get in either of those teams now.

But Evans’ career path has taken him back to where he wants to be. Back on the cusp of significant achievement. It’s noticeable that United are one of the clubs chasing Leicester these days and it will be a surprise if the midlands club’s qualification isn’t secure by the time Ole Gunnar Solskjaer and his players come to town on the last day of the season.

‘Hopefully we are not going in to the last day trying to qualify,’ Evans says. ‘Hopefully the gap is big enough. We know there will be a few teams hunting us down.’