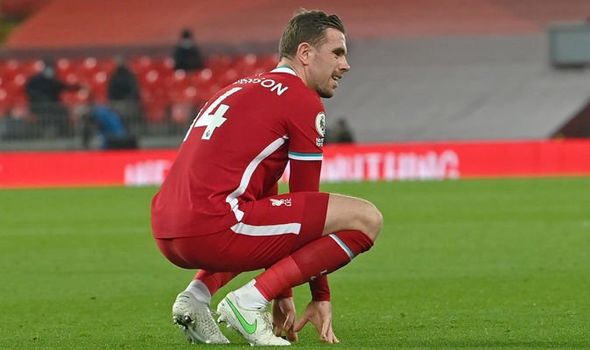 Liverpool have suffered another injury blow as Jordan Henderson was forced off in the first half of the Merseyside derby against Everton on Saturday. Henderson started the match in the centre of defence again due to the absences of Virgil van Dijk, Joe Gomez, Joel Matip and Fabinho. But he could only last 30 minutes before being replaced by Nat Phillips.

Henderson appeared to suffer a muscular injury in his leg but attenpted to carry on.

However, the England star signalled to the bench that he had to be replaced.

Henderson adds to a lengthy injury list for Jurgen Klopp, especially in defence.

Kabak has started the last three matches but Davies is yet to make an appearance for his new side.

Everton were aiming to win at Anfield in the Premier League for the first time since 1999.

He was delighted to be able to do that in an injury-blighted campaign.