Tottenham Hotspur boss Jose Mourinho still believes his side can finish in the top four of the Premier League and says the current table does not mean anything.

A poor run of just three wins in the last 12 games has seen Spurs slip from the top of the table down to ninth and they are now outsiders to secure Champions League qualification.

Sunday’s visit to West Ham seems pivotal as they are six points behind the Hammers, with a game in hand and a victory will reignite their top-four hopes.

In a see-saw season, where teams have all played different amounts of games, Mourinho says anything is still possible.

“In the same way you lose three matches and you go to a bad position, you win three matches and go to a much better position,” the Portuguese said. “So like happened last season, let’s go until the end and see what the table gives us. In the end, the table always gives you what you deserve. 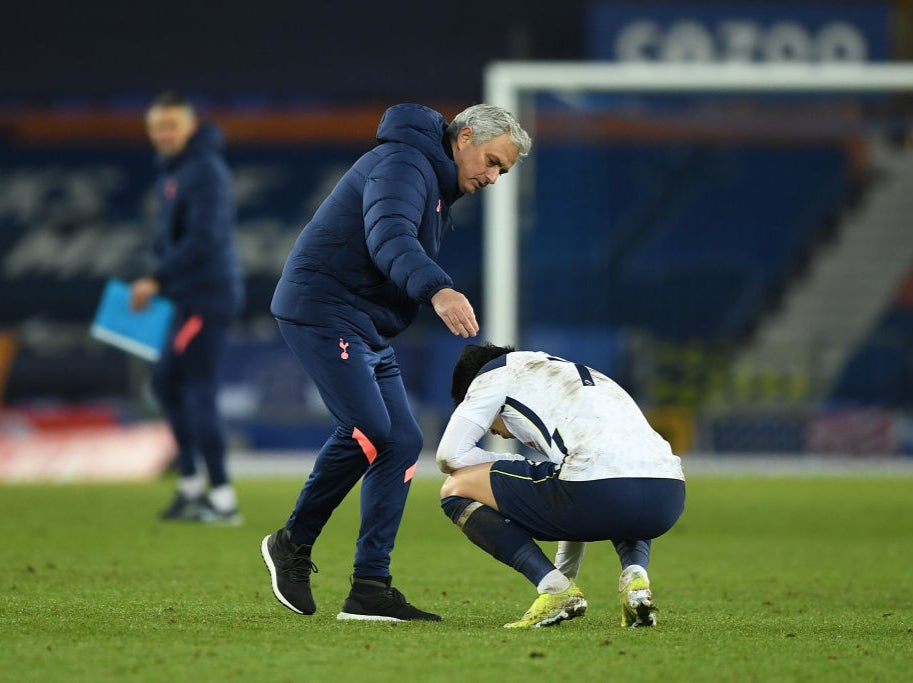 Jose Mourinho’s side have suffered a slump in form

“It’s very premature to think about the table. People still have matches in hand. In our case, we played already two matches against Liverpool, Chelsea, Manchester City. There are other teams that didn’t even play a second game against one of the top teams.

“We have one match in hand. I know already that because Southampton has to play the semi-finals of the FA Cup in the same week as we should play them, we’re not going to play that match.

“When are we going to play Aston Villa I don’t know. Maybe April 24, one day before the (Carabao Cup) final. Who knows? It’s very complicated.

“So we have to fight and we have to wait until the last match to see what happens. Anything can happen. We can finish top four, top six or outside the top six. We have to make sure the best possible thing is going to happen.”

Mourinho probably still has nightmares about the reverse fixture against West Ham as Spurs blew a 3-0 lead by conceding three goals in the final 10 minutes.

That draw had long-lasting consequences as Mourinho adopted a more pragmatic approach in order to ensure it did not happen again. And the Portuguese says that match is a microcosm of their season.

“If we win that game you would all say we played amazingly well, which we did, we had an incredible first half, lots of quality, lots of dominance, we played really well but we didn’t win it and this is a reflection of many of our matches.

“We played well, we should win but the final result is not a victory and the perception, which becomes the reality, you didn’t win, the result is not good, people can say the team didn’t play well.

“I think the team played so well but made mistakes and because of that we didn’t win. But my first match at West Ham when I arrived, it was a match that was not very different.

“We started very well, we dominated the game for 75 minutes, we were winning 3-0 and we conceded two goals and we finished the game looking like we were in trouble. This team many many times plays well but doesn’t get results by different reasons we don’t get it.”

Mourinho should have Harry Kane available at the London Stadium after he asked to be rested for the Europa League win over Wolfsberger. Sergio Reguilon (muscle) and Giovani Lo Celso (hamstring) miss out.