Tottenham hotspur boss Jose Mourinho is hoping Harry Kane is protected in the forthcoming international break while also stating Son Heung-min cannot play for South Korea if he does not feature for his club first.

Kane has played 38 times already for Spurs in a congested season and with a worrying injury history there are legitimate concerns about his fitness going into the business end of the campaign.

Son has been named in South Korea’s squad for a friendly in Japan despite limping off during Sunday’s north London derby defeat to Arsenal with a hamstring injury.

England play San Marino, Albania and Poland in World Cup qualifiers in next week’s international break and Mourinho is keen for his star man not to feature in all three.

“I have no control, if I could choose I would love them all to go because I love my players to be involved in national teams,” Mourinho said before confirming Kane would start Spurs’ Europa League last-16 second-leg tie with Dinamo Zagreb on Thursday.

“I think it’s a question of pride for them and a plus for us as a club so we like the players to go.

“But of course if we could choose we wouldn’t like the players to play three matches, but it’s not in our hands, it’s in the hands of their national team managers.

Mourinho and Three Lions boss Gareth Southgate exchanged comments earlier this season around Kane’s involvement in England games, but the Portuguese is leaving it to his counterpart this time.

“I cannot do Gareth’s work, the same way Gareth is not trying to do my work,” he said. “He doesn’t make any comments about my selection, he doesn’t give any public opinion about who I should play or rest or give more minutes to these English players.

“He doesn’t make any comment so I also don’t feel comfortable in doing that. If in the summer, I do some little funny media work, then I’ll feel some freedom to speak about others’ jobs.

“But in this moment I don’t feel comfortable, he does what he wants, what’s best for the team.

“He has a good relation with Harry, so that means good communication and, without me in the middle, I hope that in between them they can find some compromise to protect the player a little bit.”

Son is ruled out of the trip to Croatia but Mourinho declined to say how long he is out for, prompting hope he could play against Aston Villa on Sunday. 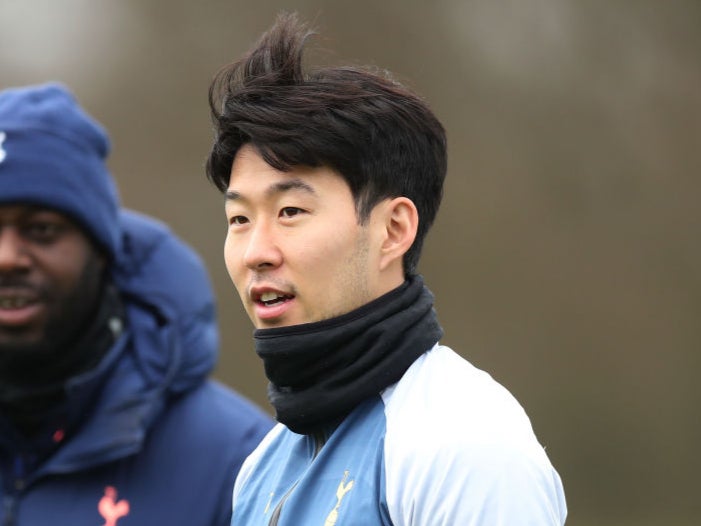 Son went off injured last week in the derby

Mourinho says if he misses the Villa game he cannot be expected to play for his country.

“If a player is injured and cannot play, a friendly or official, it doesn’t matter the match it is,” he added.

“So if we arrived next week and Sonny is injured and we can prove that to the South Korean Football Association, what’s he going to do there? Nothing.

Spurs are firm favourites to advance to the last eight of the Europa League after Kane’s two goals last week gave them a 2-0 advantage.

Zagreb have been plunged into chaos since that game as their head coach Zoran Mamic has been forced to resign after being handed a four-year prison sentence for fraud.

But Mourinho insists the tie is still alive.

“I feel very difficult but open, so the way to approach the game is to think that way and that we still have a match to play and to get a positive result.