Tottenham boss Jose Mourinho watched Gareth Bale score the winner against Brighton – and then declared his intention to check the reaction in Madrid.

Bale climbed off the bench to head home the first goal of his second spell in north London and it was an important one as it earned a 2-1 victory which moved Spurs up to second in the Premier League.

The Wales international arrived back at Spurs on a season-long loan from Real Madrid in September after a torrid final couple of years in the Spanish capital, where he fell out of favour with Zinedine Zidane and was heavily criticised by the fans.

Mourinho was delighted with the “improving” Bale – but could not resist a cheeky barb in Real’s direction.

“I’m very pleased for him, especially for him because he deserves that,” Mourinho said. “When I have five minutes I’m going to Safari to look at Madrid websites to see what they say.

“He knows we care about him and we know he cares about us, the team and the club, Spurs. He’s the perfect fit, he’s very calm, very intelligent, he has good feelings. 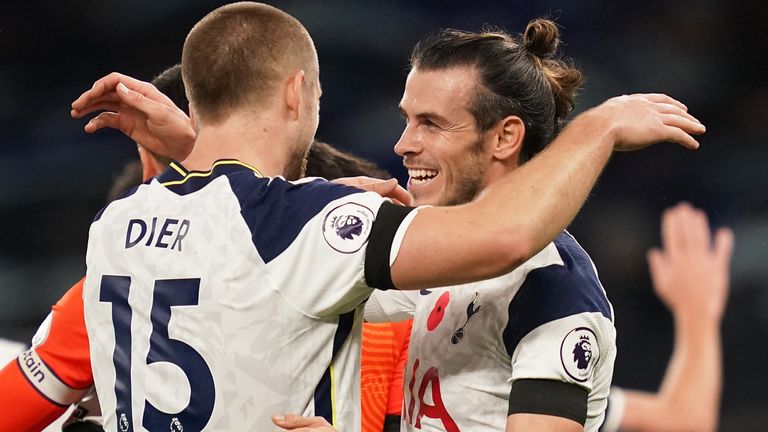 “He had bad feelings before, because the training process was hard, and his body was suffering a little bit, but we gave him what he needs as a whole.

“I am speaking about sports science, medical, my assistants, the other players. I’m very pleased for him to score this winning goal.

“I told already for about a week or so, I’m saying he’s improving. It’s not just by watching him, the data supports our training process. We knew. The good thing is Gareth also knows. We share ideas and share feelings.

“He doesn’t have 90 minutes of a Premier League match in his legs yet so we’re using the Europa League to complement his training process.

“We are using some matches in the Premier League when we decide to play him and the normal tendency for him will be of course to be better and better and better. I always will have this care with him until we feel that he’s ready.”

So what was the reaction in Madrid?

Bale’s face was nowhere to be seen on the back pages of Spain’s major newspapers on Monday morning, with another poor result for Ronald Koeman’s Barcelona taking centre stage and Cristiano Ronaldo’s goalscoring return with Juventus even beating him to a spot.

But the website of sports newspaper AS felt little need to hold back with their front-page mention of the Welshman, claiming: “Bale is reborn in London”.

AS wrote: “The image that has been expected for a long time. Gareth Bale first returned, then reappeared and in his fourth game with Tottenham in this new stage, he scored. And not only that: his goal was the decisive one to achieve victory against Brighton. A magnificent header.

“Bale, who had only been on the field for five minutes, entering as a substitute, left his definitive stamp on the game … with his first goal for the ‘Spurs’ seven years and 166 days after the last, back in 2013… he went to a corner, looked at one of the cameras and made the heart with his hands again. Like before. As usual.”

They also noted how Bale had combined with Sergio Reguiion for the winner, with a headline: “Reguilon’s marvel for Bale to score great goal: Madridistas, pick up the handkerchief…”

El Mundo also highlighted how “the connection between the ex-Madridistas got the Jose Mourinho team out of trouble,” though seemed unimpressed that Spurs were “stuck and without solutions against a rival who has only won one game and who considers relegation as a possibility.”

Bale’s goal was reportedly more matter-of-factly in Marca, but his success alongside Reguilon was also celebrated on Bernabeu Digital, a major Real Madrid fan website, as well SFieles, a Facebook fan group with more than 500,000 followers.

Bale happy to make an impact

A smiling Bale told Sky Sports after the game he was delighted to make an impact.

“It’s obviously a great feeling. I just want to come on and do a job for the team. Being on the bench and coming on, you want to make an impact and I was lucky enough to get the goal so I’m very happy.

Asked how competitive he felt Tottenham could be this season, Bale said: “Very competitive. We know not to get carried away – it’s a long season – but we’ll keep working as hard as we can.”