Ollie Watkins, Sam Johnstone, Jesse Lingard, Luke Shaw and John Stones will get the headlines after Gareth Southgate’s squad announcement – and that is understandable – but it is just as big a story that Trent Alexander-Arnold is not in this squad.

Despite playing 37 matches for the Premier League champions this season, the right-back’s fall from grace on the international front mirrors that of his club Liverpool and their spectacular plummet from the summit.

There have been no excuses from manager Gareth Southgate either; no suggestion he is being rested on that he wants to trial other options. No, he feels Reece James, Kieran Trippier and Kyle Walker are playing better football, and he even hinted that Luke Ayling and Matty Cash were ahead of Alexander-Arnold in the pecking order.

That was a timely reminder of Southgate’s ruthless streak, and the mantra he extolled when he first took over: to get into the England squad, players have to be playing regularly and to a high standard. No one will be picked on reputation or history.

He did, however, admit he had spoken to Alexander-Arnold to explain his omission and reminded him that Trippier and Walker had both been through the same experience to come back stronger.

Similarly, Jesse Lingard was not allowed to glory in his own success, now that he has been recalled. Southgate said he was lucky to be in the squad, because as well as he has played, he would usually want to see that improved form for an extended period. But needs must, because of all the attacking injuries the England manager is currently having to cope with. 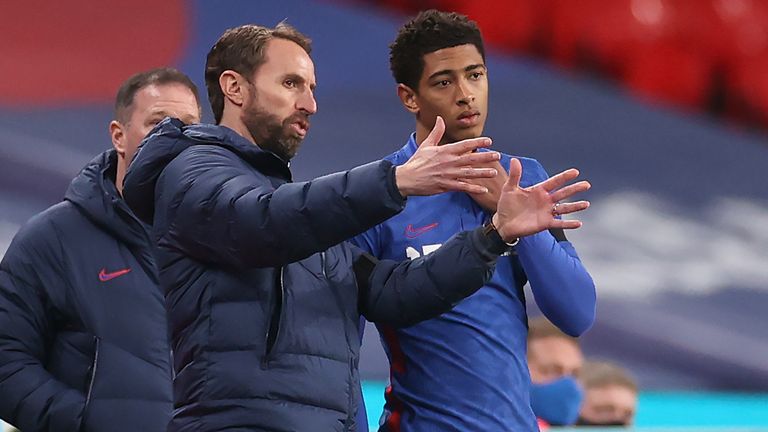 One hugely significant name in the squad list is Jude Bellingham, not because of his age or ability but because he is very unlikely to be able to travel due to Germany’s Covid-19 restrictions. They could be relaxed, so Southgate has not given up hope.

That the 17-year-old midfielder has been included over, say, Harry Winks, who is a more established international midfielder and available for selection, is a measure of just how highly-rated Bellingham is but also how Winks is suffering as a result of not being played by Jose Mourinho at Tottenham.

Equally as interesting was who Southgate plumped for up-top, with Danny Ings, Tammy Abraham and Callum Wilson all injured. Two strikers in Harry Kane and Dominic Calvert-Lewin is not enough, Southgate mentioned, so it was a toss-up between Aston Villa’s Ollie Watkins and Leeds United’s Patrick Bamford for a first England call-up.

And it was the impressive former Brentford man Watkins that won out, having taken to the Premier League like a duck to water for Villa this season. Southgate made it clear that Bamford is effectively on standby, however, should any more attacking injuries occur over the next two weeks. Further winners are Luke Shaw and John Stones; both shoe-ins and praised to the hilt while – as we predicted at Sky Sports News – West Brom goalkeeper Sam Johnstone won his first call-up. While Southgate admitted that he would not have had Jordan Pickford been fit, he praised the Albion lad for maintaining high standards for a struggling side.

It was notable too that Southgate praised Johnstone’s distribution as much as his shot-stopping, and something England regulars Pickford, Nick Pope and Henderson should take note of ahead of this summer’s Euros. The England goalkeeper needs to be able to play out from the back as well as stop the opponent from scoring.

It is a squad of 26 – smaller than the 29 Southgate included in November – and that may be partly down to injuries, but Sky Sports News has been told it is also because the England boss is trying to narrow down his selections with the summer finals in mind, when he must name only 23.

It is pretty clear Southgate feels this is not a time for experimentation, despite the apparent weakness of the opposition for the first two World Cup Qualifiers in San Marino and Albania. There are only five matches before the Euros start on June 11 and this upcoming triple-header that also includes Poland is the time for players to step up and cement themselves in the mind of the manager.