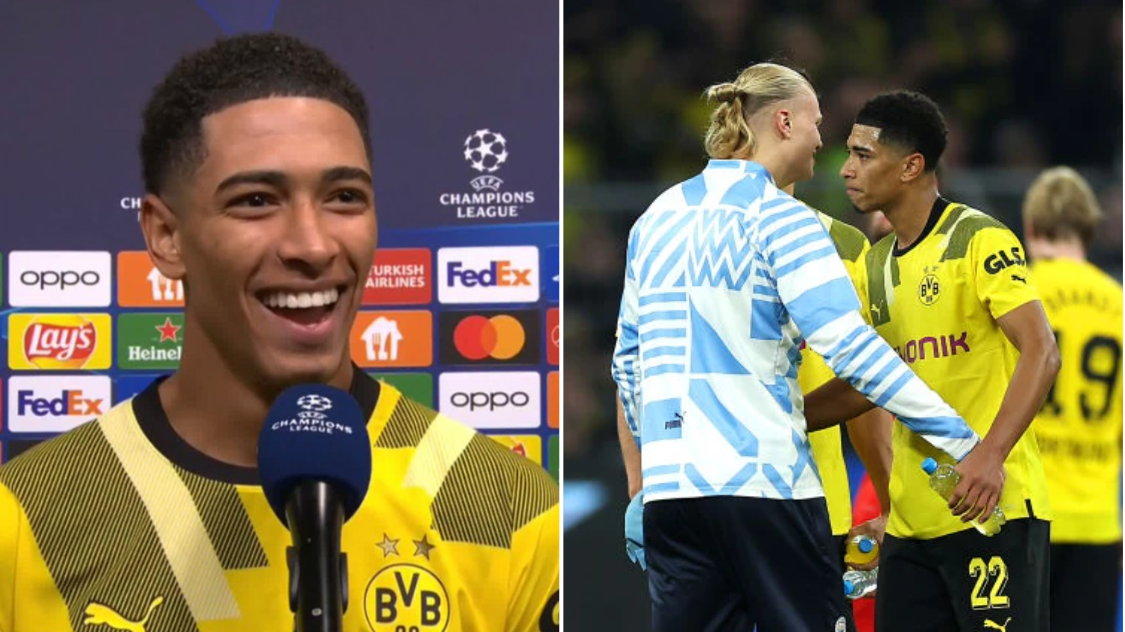 Jude Bellingham was delighted with Borussia Dortmund’s stubborn rearguard performance against Manchester City on Tuesday night and once again enjoyed some banter with Erling Haaland after the match.

Both teams progressed to the knockout stages of the Champions League after a goalless draw in Germany, with Pep Guardiola’s side progressing as group winners in spite of Riyad Mahrez’s penalty miss.

Haaland was returning to Signal Iduna Park for the first time since his move to the Etihad in the summer but only played the first 45 minutes before being subbed off at half-time.

After the game, the Norwegian made a beeline for Bellingham and the two once again shared a joke on the pitch after the England international went viral in the reverse fixture when he was caught saying ‘F**k sake, mate’ to his former team-mate following his late winner.

At the Etihad, Haaland had netted an incredible, acrobatic volley to secure all three points as City came from behind after Bellingham opened the scoring.

Both players fired blanks on Tuesday evening but Bellingham – who had bagged in his previous four European outings – was keen to remind Haaland of his own scoring exploits in the Champions League this season.

Asked about their previous conversation at the Etihad – which was relayed in rather less colourful language – and what they spoke about this time around, Bellingham told BT Sport: ‘I don’t think I said it like that but yeah!

‘Obviously it is nice to keep all of them [City players] out, but obviously him in particular because we know how dangerous he is.

‘But of course we got the draw and that’s what we needed from the game and we’re just happy to go through really so we can carry on this journey.’

On managing to shut out City’s star-studded attack, Bellingham added: ‘It is good for us on that side of the game, defensively we were really good and not many sides keep clean sheets against City with the quality they have got.

‘To do that is a positive aspect but I think we could have gone for it a bit more, we had some chances to win the game. But we have to grateful in the end because they missed a penalty and Greg [Kobel] made a huge save.’

Explaining why Haaland was withdrawn after 45 minutes, Pep Guardiola said: ‘Erling has had a bit of a fever before the game. Joao [Cancelo] had a bit of a kick on his foot, that’s why we changed it.’