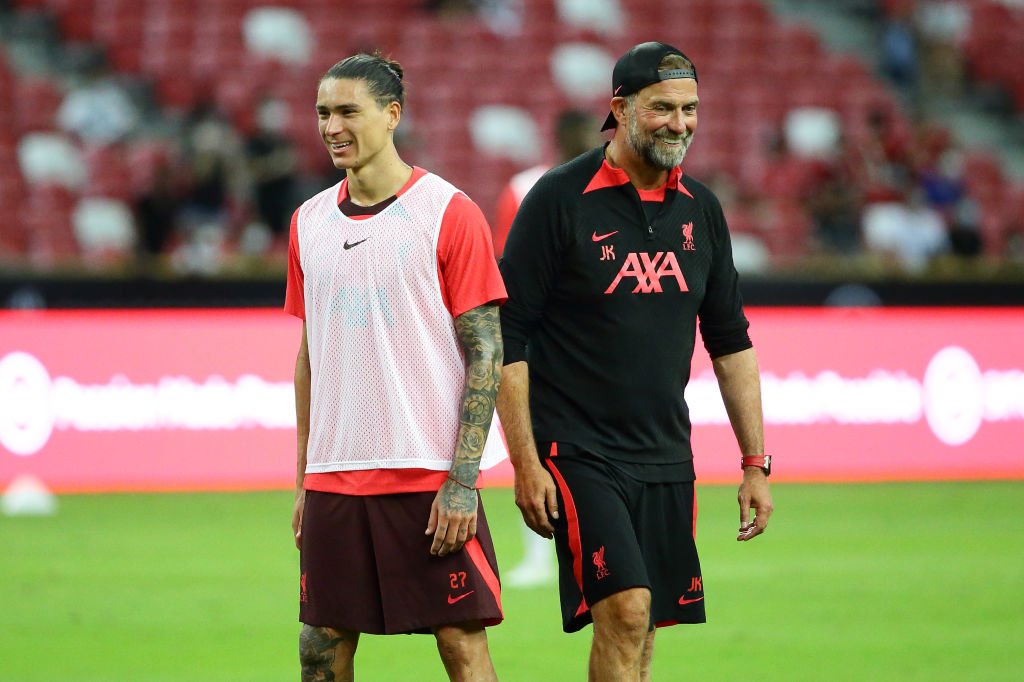 Jurgen Klopp has been making sure Darwin Nunez has learned from the mistake of being sent off against Crystal Palace, by giving the striker a slap on the neck whenever he gets the opportunity.

Nunez has had quite the start to his time with Liverpool, scoring in the Community Shield and again in his Premier League debut against Fulham.

However, on his Anfield debut he lost his temper, headbutted Palace defender Joachim Anderson and got himself both a red card and a three-match ban.

The Uruguayan missed the defeat to Manchester United and the subsequent victories over Bournemouth and Newcastle, but returns this weekend for the Merseyside Derby against Everton.

Klopp says he is not just looking forward to playing, but also to not being whacked by his manager on a regular basis anymore.

‘He’s really happy that he’s back and not suspended because every time I gave him a high five I gave him a slap on his neck as well just so he doesn’t forget. That can stop now,’ said the German. ‘He’s looking forward to it.’

The Reds boss was in jovial mood after the dramatic win over Newcastle on Wednesday, and joked that Nunez would have been destined to get sent off against Everton this weekend if he hadn’t seen red against the Eagles.

‘When it was clear it was three games [suspension] we thought, “Oh the first game he can play in is the derby!” So if he wouldn’t have had the red card three games ago, he’s have it now. But no, he’s learned the lesson.

‘He’s in really good shape. The time he was out we used with him, we tried to give him some extra input physically as well as tactically.

‘He looks really settled now, more than before. He had a really good last week.’

After looking stretched up front, Klopp will now have a number of options as Diogo Jota may also return from injury and make his first Premier League appearance of the season.

‘Diogo probably will be in as well, he trained yesterday with the team first team. We have to make a decision whether it makes sense to involve him or not,’ said Klopp.

‘But if we do it’s the first time we have five attackers, it’s like Christmas. Our line-up, I will not speak. Will we make changes? We will see.’

Liverpool go to Goodison Park in the 12.30pm kick-off on Saturday.