Jurgen Klopp said a “tricky” pitch in a rain-sodden Amsterdam left both sides “exhausted” in Liverpool’s 1-0 win at Ajax.

The Reds kicked off their Champions League campaign with three points and a clean sheet in their first game since Virgil van Dijk was ruled out by a long-term injury, with a makeshift centre-back pairing of Fabinho and Joe Gomez performing well at the back and Nicolas Tagliafico’s unfortunate own goal giving the visitors three points in the Netherlands.

Liverpool still found life tough going at times, with Fabinho needing to clear Dusan Tadic’s first-half effort off the line and Davy Klaassen striking the post from 20 yards within two minutes of the interval.

Ajax goalkeeper Andre Onana was only seriously tested once before a flurry of injury-time chances as the hosts chased a late equaliser, something Klopp felt owed a lot to the conditions in the Dutch capital.

“We were good enough to win the game, that’s what you need,” he told BT Sport. “I think both teams can play better football, it was pretty wild at moments. I think the pitch was really tricky, deep, muddy a little bit, both teams looked really exhausted pretty early.

“Three days ago it looked completely different, yesterday in training too but it was the same for Ajax too. They are where we are, early in the season, that cannot be the reason really.

“You need to score a goal, we did that, we didn’t use our chances which is a bit of a shame, they had a big one with the post directly after half-time. When you’re 1-0 up these things can happen but all over I am really fine with the game because it was not our sunny shine world-class football day, but in a tournament like the Champions League you need the result and we got it.

“It’s a good example for how the boys played; it was not perfect but they fought like crazy, in that situation it helped massively, but apart from that, I really liked the fresh legs when we brought them on. The medical department told me Henderson could not play 90 minutes – okay, he had 45, and did really well.” 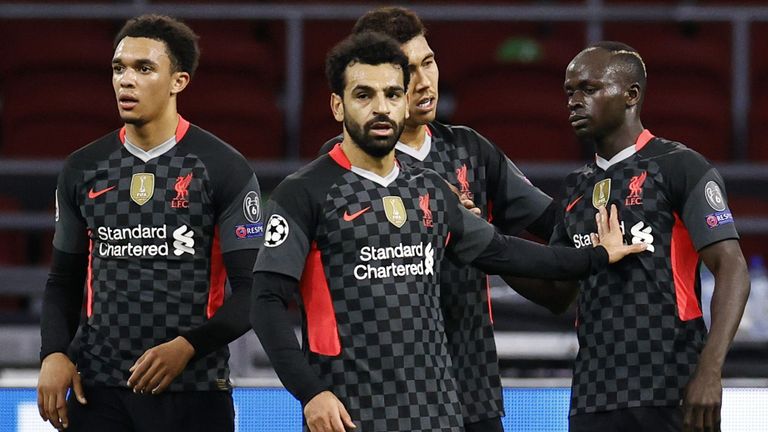 Another tactical move involved switching Liverpool’s regular front three of Mohamed Salah, Sadio Mane and Roberto Firmino for Takumi Minamino, Xherdan Shaqiri and Diogo Jota with an hour played, something Klopp felt re-energised his side for the last third of the game.

“Game management is one thing, the power of the other three is the other thing,” he said. “You saw they were fresher, the hardest working, it’s a shame Diogo didn’t score, Shaq was lively and Taki is a machine, he defends everywhere and then offensively he’s really involved.

“If we can make five changes in midweek games, we will probably have to do that most of the time.”

A man-of-the-match performance from Fabinho in the absence of Van Dijk provided some encouragement as to how Liverpool may be able to cope without their defensive talisman, with Klopp adamant he would not have paired the Brazilian with Gomez had he not been comfortable he was content playing at centre-back.

The 26-year-old, who joined Liverpool from Monaco in 2018, has played only five games for the club in central defence – with four resulting in clean sheets for his side.

Klopp told his post-match press conference: “Fabinho can play in the position, he likes playing it actually. If I’d have asked him to play right-back, I don’t think he would have enjoyed it so much, but in our situation at the moment we have to keep these boys fit and they can help us a lot. 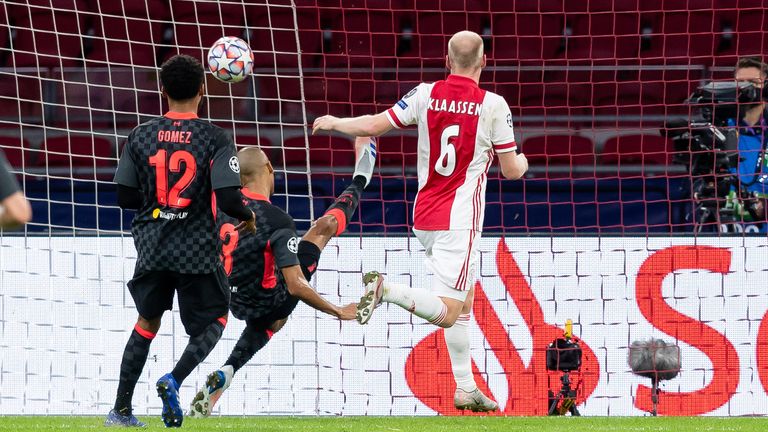 “Fabinho, I’m not surprised that he played well there or we would have thought about a different solution, even though that would have been very tricky. I’m really pleased tonight, pleased for him, it gave him confidence and helped us.

“He was good, but even he can play better! This combination with Joe and Fabinho, I don’t think they’ve played together before, maybe once.

“They need to get used to each other, to the verbal demands in that position, what you have to say to help the midfielders, so it was a good performance, but there’s a lot to improve which is good. How high or low is the last line in each moment? Counter-pressing, how do we react there, and it was absolutely good for tonight.”