How Kaka, Julio Cesar and Emile Heskey became classmates in Manchester! The former Ballon d’Or winner is surrounded by recognisable faces as he goes back to school with former stars for Executive Masters for International Players run by UEFA

A Brazilian student is enjoying a tour of the Etihad Stadium with his classmates. Unshaven and dressed casually in jeans and a jumper, he has his picture taken in front of a giant Manchester City crest, then sits in Phil Foden’s seat in the dressing room while a video is shown to the group.

Earlier, in a makeshift classroom in the Colin Bell Stand, he listens to a lecture on the different business models for football stadiums, where the Bernabeu is used as an example.

It turns out it is a place he knows well. For the student in question is Kaka, who just so happened to play there for Real Madrid for four years. 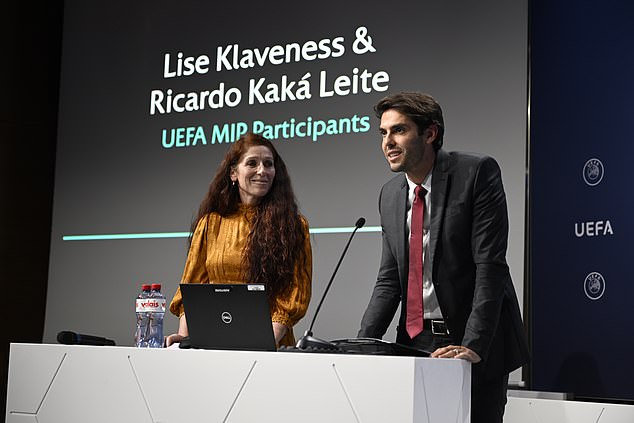 Now aged 40, albeit still with the youthful looks of a fresher, his morning spent studying is a far cry from where he was 20 years ago – lifting the World Cup with Brazil in Japan. But the Ballon d’Or winner is in good company in this suite at the Etihad.

He is sharing a table with his old Brazil team-mate, Julio Cesar, the former Inter Milan and QPR goalkeeper.

Behind them, with their hands up to ask a question, are Emile Heskey – who played for England against Kaka’s Brazil in the 2002 World Cup – and Kolo Toure, while wandering in late to the session is John O’Shea. 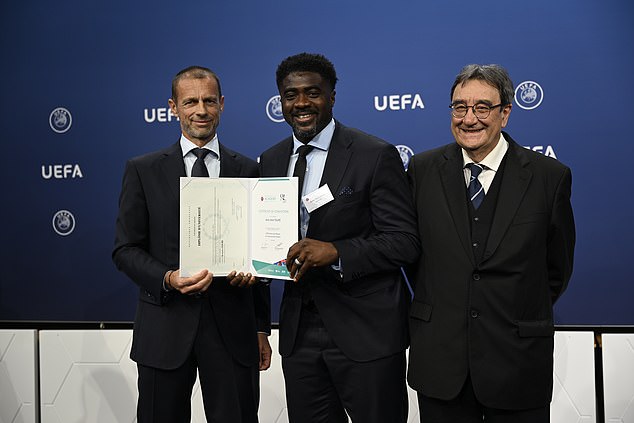 Emile Heskey, Kolo Toure (pictured) and John O’Shea were among the other former players

Once fierce rivals, they are now all on the same team as part of a 30-strong cohort studying for the Executive Masters for International Players, a master’s degree run by UEFA in association with the University of Limoges in France and Birkbeck, University of London.

Andrey Arshavin and Florent Malouda are also here as part of the third edition of the course.

Didier Drogba is missing as he has deferred to the fourth, where he will be joined by Nemanja Vidic, Sami Khedira and Nigel de Jong. It is no wonder the lecturers can be star struck. 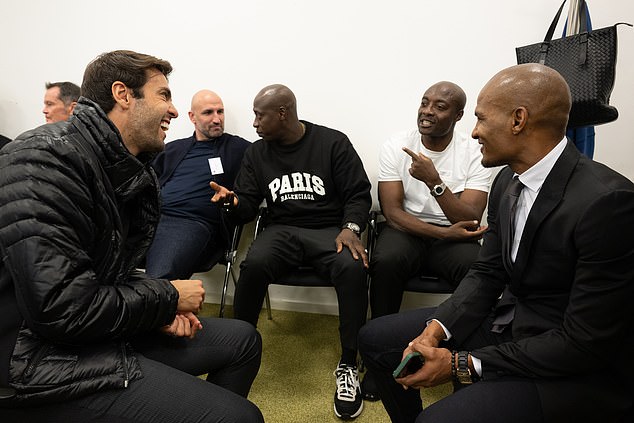 Florent Malouda (pictured, right), Andrey Arshavin and many others are all also on the course

‘Before I started with UEFA, I was teaching students at a university in Switzerland,’ course leader Joel Pinson tells Sportsmail.

‘When I entered the classroom for the first session of the second edition, there was Gilberto Silva, Luis Garcia, Gaizka Mendieta and Youri Djorkaeff in the room.

‘I was like, “Dude, I was watching them a couple of years ago on TV”. I was used to teaching but I was sweating, super stressed.

‘Then I started and asked a question and all of them looked down to avoid eye contact at the same time. Then I was like, “OK, it’s regular students!”.’

Regular students, just with a bit more money. This two-year course costs more than £23,000, while pupils must also pay for their travel and accommodation for the seven week-long sessions, which are held in six different European cities, as well as New York.

During their stay in the North West, the class of 2022 visited the Etihad, Anfield and Old Trafford, where they shadowed those facilitating a Manchester United Europa League match. 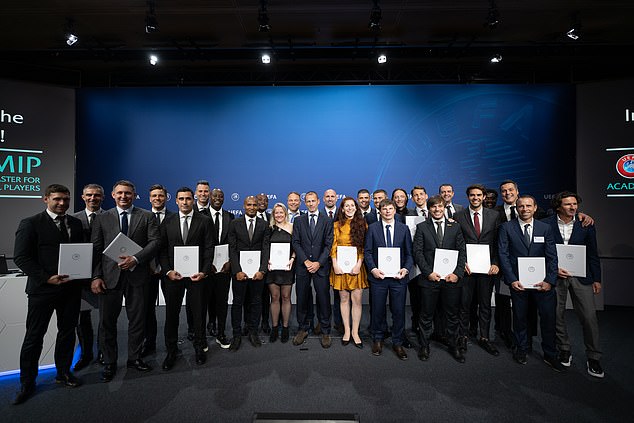 During their stay in the North West, the class of 2022 visited the Etihad and Anfield

‘When I was playing, I didn’t think of anything but what happens on the pitch,’ admits former England and Liverpool striker Heskey.

‘I didn’t think about what has got us to this stage of having 50,000 people here, all the catering, all the sponsorships. This course helps us understand what goes on in the background.’

Indeed, the programme is specifically designed to give retired internationals the ‘administrative knowledge required to occupy senior positions within football organisations’.

UEFA launched it in 2015 after recognising the need for more former players to take up administrative roles.

They now boast that 80 per cent of their graduates are hired or promoted by football organisations.

Of the first cohort, former Barcelona defender Eric Abidal went back to his old club as sporting director, and ex-Blackburn striker Jason Roberts is now the director of development at CONCACAF.

‘If you take someone like Kaka, for sure, he doesn’t need to work anymore,’ adds Pinson. ‘But he still has 30 years at least before official retirement.

‘He realised that to perform off the pitch he needs to be ready, to train and have the tools, just like he did on the pitch. That is the mentality.’

While on the programme, students not currently employed by a sports organisation must carry out a three-month work placement.

Heskey went to his old club Leicester as head of football development for the women’s team. He now coaches them, as well as the men’s Under 21s and 18s.

Toure is also working with the Foxes, but as a first-team coach under Brendan Rodgers. ‘I want to be a manger one day,’ says the ex-Arsenal and Manchester City defender.

‘But to be a good one you need to be able to understand everything in and around the football organisation. It’s a good opportunity for me to come and educate myself and bring fresh ideas back to the club to help them get better.’

O’Shea has his own managerial ambitions and is currently coaching Stoke and Republic of Ireland Under 21s. But a future role as a director also appeals.

‘That would be an aim,’ admits the former Manchester United star. ‘That is why I have done the course, to get that knowledge off the pitch.

‘I definitely want to give the craziness of management a go, but I wanted to get an understanding of the boardroom, the sporting director side, how people negotiate and build relationships behind the scenes.

That’s another big thing with this course. The relationships you get with other people around the world is incredible.’

The camaraderie is evident on this morning in Manchester. Heskey adds: ‘We have got a WhatsApp group and are always helping each other out and congratulating each other. The support network has been great for all of us to push that one step further.’

That support is needed when it is their turn to present in front of the class at the start of a session.

This morning’s chosen one is former Newcastle and Fulham defender Aaron Hughes, now elite football development consultant with the Irish FA. ‘It’s still not easy but it’s a lot easier than what it was at the start of the course,’ he says.

Pinson adds: ‘Something we realised at the beginning is that they might have played in front of thousands of people, but you put them in front of a classroom, even of people they know, and they will be shaking and lost for words. At the end, when they realise they are able to do it, it makes them proud.’

Becoming a competent public speaker is vital as it forms part of their final assessment. Each student must write a thesis on a certain football topic and then present it to a panel.

Earlier this month, the cohort graduated at a ceremony in Nyon, attended by the UEFA president Aleksander Ceferin. Who knows, one of these graduates may one day be sat in his seat.