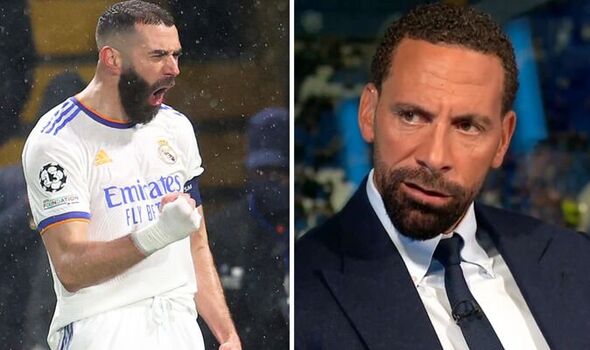 Rio Ferdinand was proven wrong by Real Madrid striker Karim Benzema during the Champions League clash against Chelsea on Wednesday. Ferdinand claimed Benzema would not have many chances in front of goal at Stamford Bridge in the first leg of the quarter-final.

However, the forward scored two great headers before half-time to put his side into the ascendancy. The Frenchman has now scored five goals in his last two European appearances.

Before the match, Ferdinand hailed Benzema for emerging from Cristiano Ronaldo’s shadow in recent years. But he did not expect him to get much joy in west London.

Ferdinand said on BT Sport: “The fact he played as understudy to Cristiano Ronaldo shows a huge amount of humility. To be able to do that, knowing inside he’s the top man, he’s at the table, he can score goals but is willing to take a step back for the betterment of the team is a huge, huge trait to have.

“I think being at Stamford Bridge he might have less opportunities compared to at the Bernabeu.” Benzema is enjoying his best goalscoring season for Real.

He has now netted 35 times in all competitions for Los Blancos this term. Former Chelsea star Joe Cole also hailed Benzema for becoming the main man at the Bernabeu following Ronaldo’s departure.

Cole said: “He’s been a foil for Cristiano Ronaldo, rightly so because Cristiano is one of the greatest of all time, but he played the left-hand side of attack so magnificently and now he’s the focal point, he’s showing how quality he is. He looks like he could go on for a few more years scoring goals.”

He said: “Benzema, his best season, maturing like fine wine culminating in a hat-trick against PSG when he was outstanding. The onus is on him now to play well every game.

“He missed the Clasico and they got hammered, came back for Celta Vigo and scored two at the weekend. If they (Madrid) keep hold of any result and get back to the Bernabeu, that’s what they need.”