One player made the difference at the Emirates on Sunday – and saved Chelsea’s bacon: Sam Kerr.

After 89 minutes of Arsenal dominance in the London derby, Kerr buried a header off a searing cross from Jelena Cankovic into the back of the net. 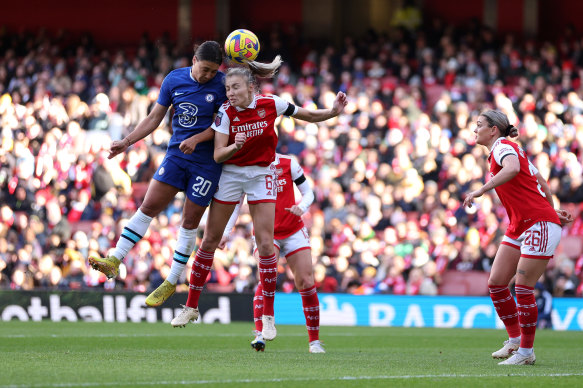 The goal ensured Chelsea remain top of the Women’s Super League, Kerr salvaging a point for her side in a much-hyped derby after the home side had penetrated deep into the visitors’ half time and time again.

Caitlin Foord had given Arsenal the edge, the Australian’s charging second-half run into the box drawing a foul and setting Kim Little up to convert the only penalty of the game.

Chelsea had just survived a 53rd-minute raid on goal by Swedish international Lina Hurtig, who was denied twice within seconds. 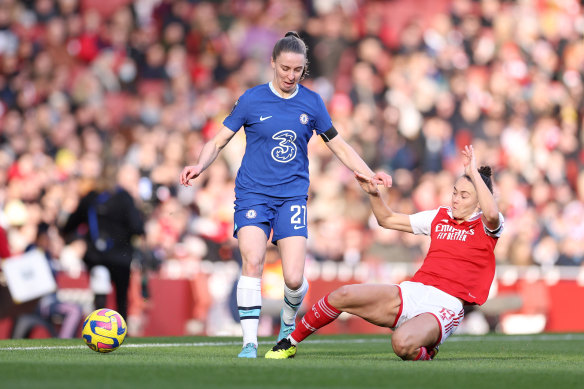 Moments later, Foord guided the ball towards goal, drawing a controversial foul from Niamh Charles, the referee ruling the contact came inside the box, though replays hinted otherwise. Little buried the ball from the spot to give Arsenal the lead.

There was a late flourish from Chelsea, but Arsenal’s defence – led by England captain Leah Williamson and backed by Australian Steph Catley – held strong until Cankovic’s late cross swung in for Kerr.

Emma Hayes’ double substation after 60 minutes, bringing Fran Kirby and Eve Perisset on for Jessie Fleming and Charles, had done little to stem the tide against the visitors until the final 10 minutes.

Catley was unlucky in the 73rd minute, her cross into the box hustled onto the crossbar by Chelsea keeper Zecira Musovic.

The first half was a yo-yoing affair before Arsenal took charge, looking dangerous down the left-hand side, but providing few real challenges for Musovic.

The visitors clawed their way back into the game by half-time, but regular incursions by Lauren James proved fruitless, while a late chance off Kerr’s head missed its mark, despite providing Chelsea with their only real chance in the first 45 minutes.

Chelsea may have felt hard-done-by to be all square at the break after Foord brought Charles down in the box, but the contact bypassed the referee. With no VAR, play continued.

It was an emotionally charged game on and off the field.

Arsenal players wore black armbands as a mark of respect for injured star Beth Mead’s mother, June, who lost her fight against ovarian cancer on January 7. The Chelsea players were also wearing black armbands to mark the death of former player Gianluca Vialli.

The Emirates also paid tribute to Jordan Nobbs – watching from the directors’ box. Nobbs, a club stalwart, debuted on Saturday for Aston Villa after leaving north London in pursuit of more regular football and a seat on England’s World Cup plane to Australia.