Sam Kerr’s terrific year for the Matildas and Chelsea has been recognised with her fourth consecutive nomination for the Ballon d’Or, world football’s most prestigious individual award.

Kerr finished third last year and is expected to again be at the pointy end of the 20-strong list of contenders, which was unveiled on Saturday morning (AEST) along with the men’s 30-player shortlist. 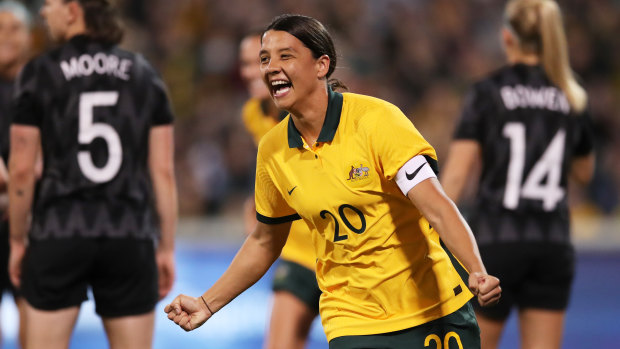 Sam Kerr celebrates yet another goal for the Matildas.Credit:Getty

The 28-year-old is the only player from the Asian confederation in the mix, with most of the other nominees coming from Europe, which has quickly become a force in the women’s game to match its status in men’s football.

Taking out the Women’s Super League golden boot for the second straight season with 20 goals in as many games for Chelsea, Kerr scored twice to guide them to further glory in May’s dramatic FA Cup final against Manchester City at Wembley.

She continued her dynamic form for Australia, too, moving past Tim Cahill’s record of 50 goals to become the country’s all-time leading goal scorer during the Matildas’ failed campaign at the Asian Cup.

Last year’s winner, Alexia Putellas, is on the shortlist again, as are English trio Beth Mead, Millie Bright and Lucy Bronze, who were all part of the team that won the recent Women’s Euros tournament.

Meanwhile, seven-time winner Lionel Messi was not among the men’s nominees for the award for the first time since 2005.

The Argentina great edged out Poland striker Robert Lewandowski for the Ballon d’Or last year, but wasn’t nominated this time after an underwhelming first season at Paris Saint-Germain.

The 35-year-old forward also won the prize in 2019. It was not awarded in 2020 due to the pandemic. Neymar also missed the cut this time.

The awards will be presented on October 17.

Among changes announced in March, the award is now being awarded based on performances during a regular European season, rather than a calendar year. A reduction in the number of voters was among other changes, with the goal of streamlining the process. Voters also will no longer consider a player’s career accomplishments.

France Football magazine has given out the award to men every year since 1956 and to women each year since 2018 – when Hegerberg became the first female winner – though both were cancelled in 2020 because of the pandemic.