England international Fran Kirby scored one goal and scored another as champions Chelsea eased to a 3-1 home win over title rivals Manchester City in the Women's Super League on Sunday.

Norway's Maren Mjelde put the home side ahead with a penalty in the 36th minute, with Kirby setting up striker Sam Kerr with an excellent first-time ball for the second in the 57th minute. 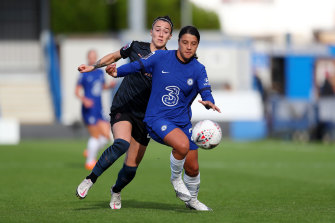 Chloe Kelly pulled one back for City from the penalty spot in the 73rd minute, but six minutes later Kirby latched on to a long ball for a breakaway goal that made it 3-1.

The win leaves Chelsea third in the standings with 10 points from four games, while City are fifth on seven points after a disappointing start.

Arsenal's 5-0 thrashing of Brighton & Hove Albion meant they returned to the summit on Sunday with 12 points from their four games, while Manchester United, who led briefly after a 1-0 over Tottenham Hotspur on Saturday, are fourth.

Unbeaten Everton conceded their first league goal of the season in a 3-1 over West Ham United as they went into second place on goal difference behind Arsenal. Birmingham City got their first win of the campaign with a 1-0 victory at Reading.