Chelsea got off to a flying start when Kerr made the most of some shoddy defending from United in the second minute to play in Kirby, who tapped in from close range. 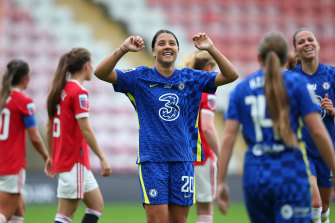 Sam Kerr celebrates scoring for Chelsea against Manchester United in the WSL on Sunday.Credit:Getty Images

Pernille Harder doubled their advantage with a fine solo run and dink in the 24th minute.

The visitors piled more misery on United four minutes before the interval as Kerr and Kirby reversed roles for the Australian international to stab home a third.

United improved after the break and pulled one back through substitute Alessia Russo in the 48th minute, but Chelsea restored their three-goal lead almost immediately when Kerr drove home a cross from the right. Replays, however, suggested the 28-year-old may have been lucky not to be flagged for offside.

Substitutes Drew Pence and Jessie Fleming grabbed a goal each before full-time, leaving both sides on six points from their opening three games.