Arsenal left-back Kieran Tierney was left impressed by Martin Odegaard before the new signing’s first training session even began. Odegaard completed his six-month loan move to Arsenal from Real Madrid on Wednesday. The Norway international trained with his new team-mates for the first time later in the day.

And straight away the 22-year-old was called into action, as he had to control a loose ball coming from the sky.

Odegaard did that with aplomb, taking the ball down and passing it to the other players.

And Tierney reacted by saying: “Ah what a first touch that is!”, while clapping and laughing. 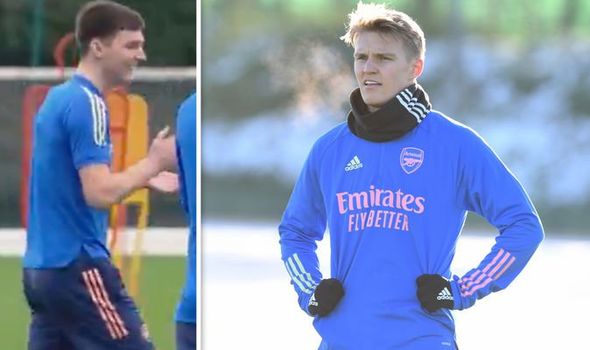 Odegaard has only played five minutes of competitive action since the beginning of December after falling out of favour at the Bernabeu.

Therefore it may be unlikely for him to be thrown straight into the starting XI for the visit of Manchester United on Saturday.

Odegaard says conversations with manager Mikel Arteta helped convince him Arsenal were the right club for him.

“I spoke to him before coming here, of course,” Odegaard told Arsenal.com. 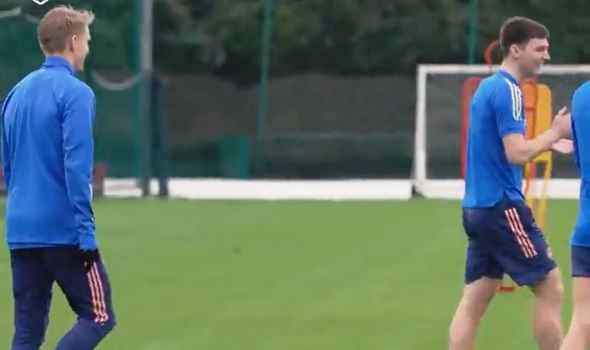 “That was very important for me and he seems like a top manager and I liked his ideas, the way he sees football and also the way he is.

“He gave me a great feeling and that was important for me to come here. He was crucial.

“I think every time you go to a new place, you want to make sure that it feels good and that there is a plan. But I think everything here just seems good.

Arteta had been in the market for an attacking midfielder throughout the January window and eventually settled on Odegaard.

On the deal, Arteta said: “It’s great that we’ve secured Martin to come to us until the end of the season.

“Martin is of course a player that we all know very well and although still young, he has been playing at the top level for a while.

“Martin will provide us with quality offensive options and we’re all excited to be integrating him into our plans between now and May.”