Kilmarnock 0-1 Rangers: Steven Gerrard’s men go nine points clear of Celtic at the top of the Scottish Premiership after James Tavernier scores his SIXTH penalty of the season

For Rangers, this counted as another staging post in the long journey to truly establish their title credentials.

A gritty performance delivered more opportunities than the scoreline suggests. At first glance, it could almost appear like a routine win. At Rugby Park, however, nothing has been straightforward for the Ibrox side in recent years.

Some ghosts may now have been laid to rest by seeing this one through. There was surely additional psychological value in a victory that lifted Steven Gerrard’s side nine points clear of Celtic at the top of the Premiership standings, having played two games more. 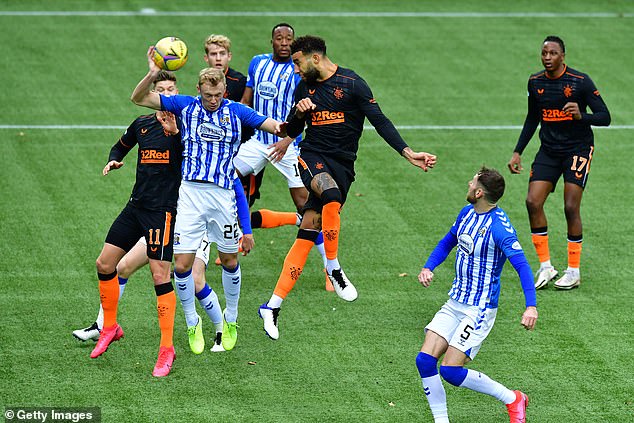 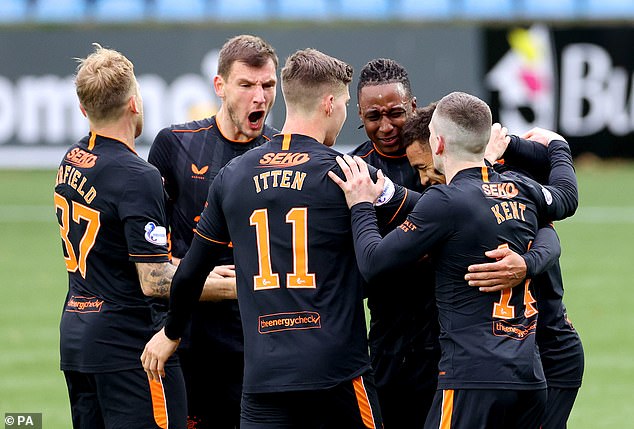 The story of their toils in Kilmarnock is well-worn yet bears repeating. This was Gerrard’s fifth visit on league business. Three of the previous four had ended in defeat, with two of those dealing particularly damaging blows to their championship ambitions in successive seasons.

A sole previous victory was only claimed through a stoppage-time header from Connor Goldson. For Gerrard, motoring down the M77 has so often been a precursor for strife. 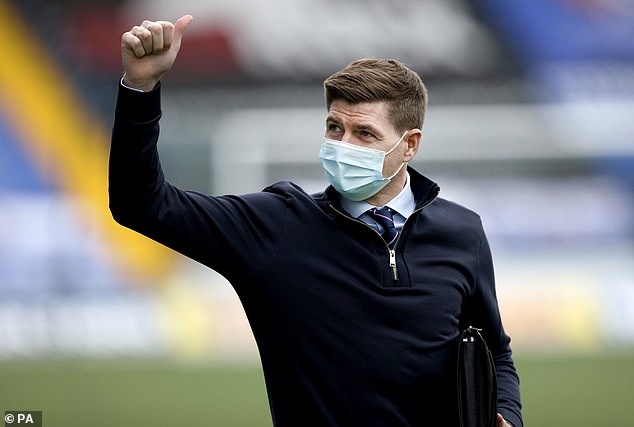 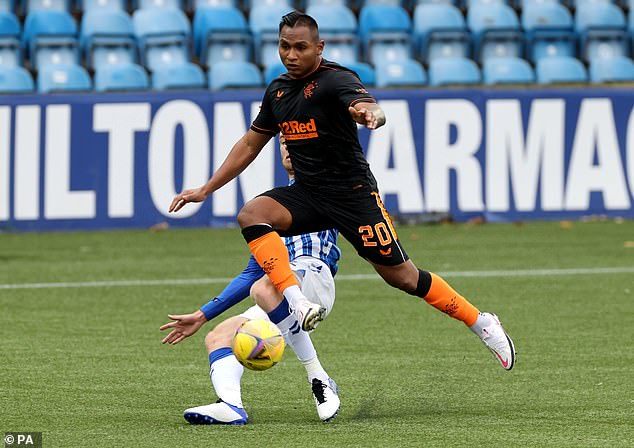 It wasn’t exactly relaxing for him or his players this time around. As they tend to do, Kilmarnock made life distinctly difficult. Especially during a tense countdown when torrential rain and gale-force winds made it akin to football being played inside a washing machine.

James Tavernier’s 19th minute penalty – the Ibrox captain’s tenth of the season – ultimately made the difference, but it was a win merited on the overall balance of play. Chances to increase the lead weren’t taken before anxiety steadily began to creep in.

Gerrard even introduced Leon Balogun as a third centre-back for the closing minutes to help lock down a 15th clean sheet in 18 unbeaten games. A ninth successive win means Rangers have done what they had to in terms of applying more pressure to Celtic’s games in hand.

For Kilmarnock manager Alex Dyer, a third straight home defeat is unlikely to lead to excessive naval-gazing. Now sixth in the Premiership standings, they showed a decent level of durability before becoming more adventurous towards the end. This time, though, there was to be no dramatic finale.

Gerard had sprung a mild surprise in his team selection by drafting in Cedric Itten for just his second start following a £2.5 million move from St Gallen – and his first since a 2-0 home win over Kilmarnock back on August 22.

Alfredo Morelos was dropped that day after his attitude was called into question amid ongoing transfer speculation, but Colombian started here after coming off the bench to head home the winner against Lech Poznan last Thursday evening. He filled the central striking role, with Itten operating to his right.

Deploying the Swiss there asked different question of Calum Waters and Stuart Findlay as Itten looked to make his presence felt in the space between them. With six minutes on the clock, that led to the first chance.

Itten burrowed deep into the Kilmarnock area before pulling the ball back for Kent. A clean strike might have led to a goal but the Englishman rather scuffed his effort through a crowd of players and Danny Rogers was able to repel.

It set a tone, though. Prepared to both build up through midfield and go more direct, Rangers began to assume a real dominance of territory.

Connor Goldson stepped out from the back to sling a pass wide to Tavernier and continue his advance in a bid to meet the cross. The ball broke to Joe Aribo at the fringe of the area and the midfielder hammered a drive inches too high.

Then, on 19 minutes, came the breakthrough. Gary Dicker fouled Ryan Kent midway inside the home half to concede a free-kick that Borna Barisic delivered. 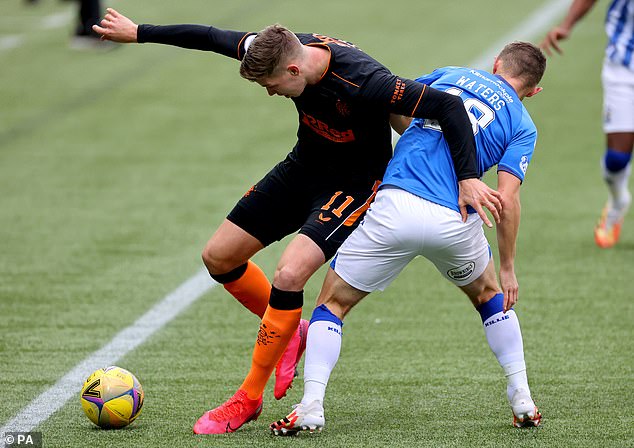 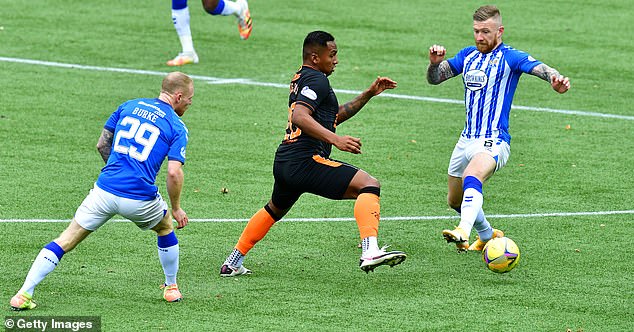 Goldson managed a slight flick with his head before it struck the right arm of Ross Millen, raised inexplicably high. The decision was straightforward for referee Andrew Dallas.

Rogers guessed the right way, but Tavernier put too much power and accuracy on his penalty for it to matter. That’s six spot-kick conversions for the right-back since being restored to those duties in September.

Rangers continued to press. Arfield fired wide from 18 yards before Waters was booked for felling Aribo. The Nigerian midfielder then set up Itten for a near-post flick off target.

Kilmarnock had managed to register a Rory McKenzie strike that deflected through to Allan McGregor but that was a distinctly rare change in direction of traffic.

Goldson went long again with a spearing pass that was held up and laid off by Kent. Aribo connected firmly but a slight deflection carried it wide. 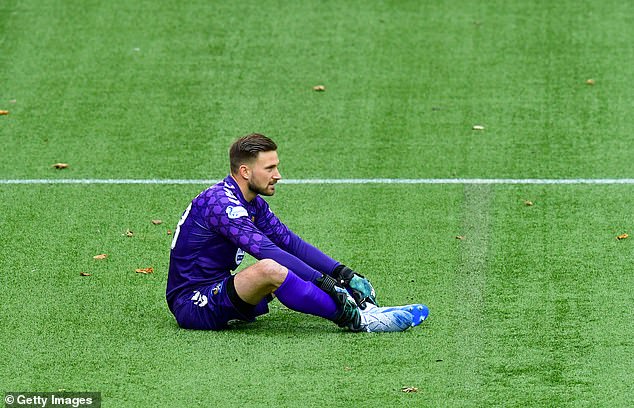 Gerrard’s side accelerated after the restart in search of that prized second goal. Scott Arfield and Morelos both saw shots blocked after clever work on the left by Kent had fashioned successive opportunities. Then the £7 million man saw a low effort denied by Rogers’ leg after a Morelos dummy had given him sight of goal.

Their opponents, though, were in no mood to wilt. Kilmarnock rode this latest little storm and began to push back with more convincing attacking of their own.

A ball in behind released Alan Power, who flicked up for a left-foot attempt clutched by McGregor. Shortly afterwards, McKenzie was unlucky with a powerful 20-yard snapshot that zipped just beyond the goalkeeper’s right-hand post.

Itten couldn’t beat Rogers when getting on the end of a cross from substitute Steven Davis, but Rangers still had to survive a scare at the other end.

On for Nicke Kabamba, Eamonn Brophy boomed a free-kick along the sodden surface but McGregor reacted well to save.