Jurgen Klopp is adamant Luis Diaz will become a rich source of goals for Liverpool after suffering the most gruelling pre-season of his professional career.

Diaz could not have made a more positive impression during his first months in England.

His performances, after the £37.5million move from Porto, were one of the main reasons Liverpool won both domestic cups and reached the Champions League final. 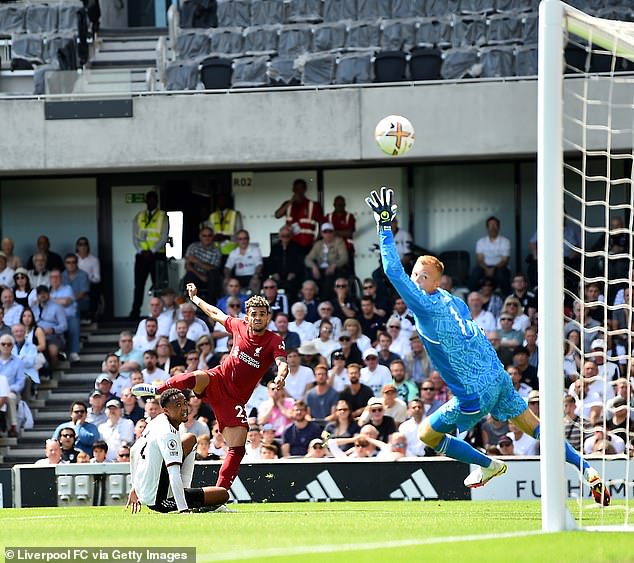 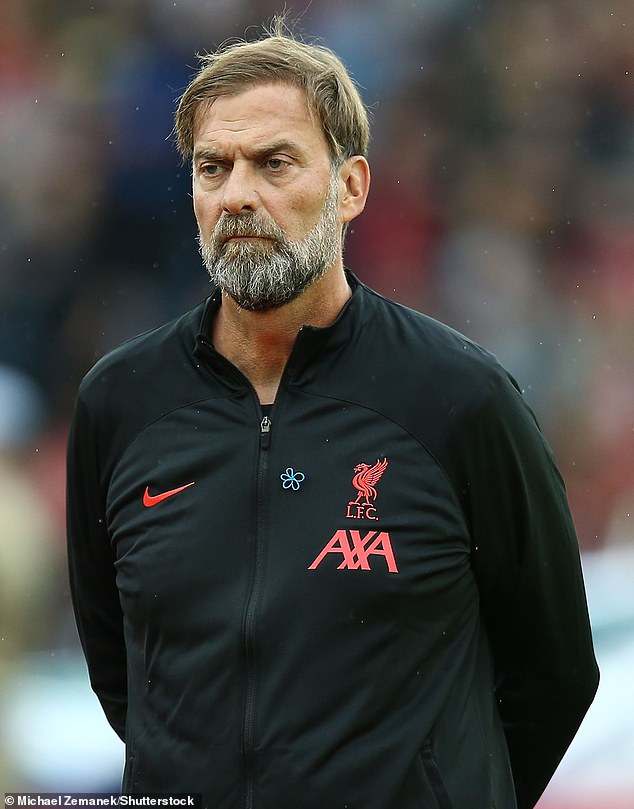 The Colombia forward scored six times after making his debut in January but there was always a feeling that his return could be even better if he had a little bit more composure in the penalty area.

He had scored 16 goals for Porto in the first half of the season before being sold. Comparisons are being drawn with how things were for Sadio Mane and Mohamed Salah when they arrived at Anfield.

They became great goalscorers rather than just scorers of great goals in a team that was constructed to get the best out of them.

Klopp, whose side host Crystal Palace on Monday evening, knows there will be a period when things don’t go smoothly for Diaz, as he continues to adjust, but believes the work that went on at Liverpool’s Austrian pre-season camp will bear fruit in the long run for the 25-year-old.

‘He improved definitely with understanding of what we are doing but that then leads to strange situations as well,’ said Klopp.

‘We want to be flexible on the wings and that means he has to be slightly more inside but then you realise it’s good for him if he stays longer on the outside.

‘We have to get used to that — and that will help — but, unfortunately, a learning process never happens overnight.

‘The next thing is it is his first pre-season with us and they all — I’m not sure if suffer is the right word — but they all feel it.

‘He will benefit from a full pre-season because he was not on international duty. He started on the first day with us and took part in all the sessions and that is the most important thing. 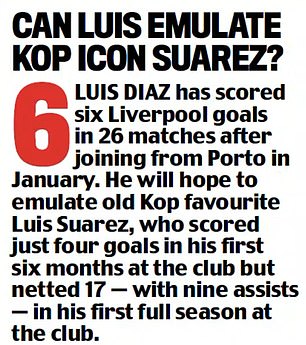 Could Diaz become as prolific as Luis Suarez?

‘He has the quality and potential and if we can put the miles in his legs during pre-season that will help in the long term.

‘He just needs one goal and then we will go from there.’

With better luck, Diaz could have already been up and running for the season — he hit the post at Fulham and saw another attempt ruled out for offside — and it’s inevitable there will be comparisons in how he performs in the role that Mane, who is now at Bayern Munich, made his own.

Klopp understands that will be the case but illustrated why Diaz shouldn’t have any concerns about finding a scoring touch because the system that enabled Mane and Salah to thrive remains.

‘They will be in a lot of goalscoring situations and that then makes you the player we remember.

‘Sadio scored three against us for Southampton but it is not that he scored every week. Consistency came with confidence, with the team-mates and with the structure of our game. That is what we are working on (with Luis).’

Saturday's Clasico between Barcelona and Real will be the weirdest yet