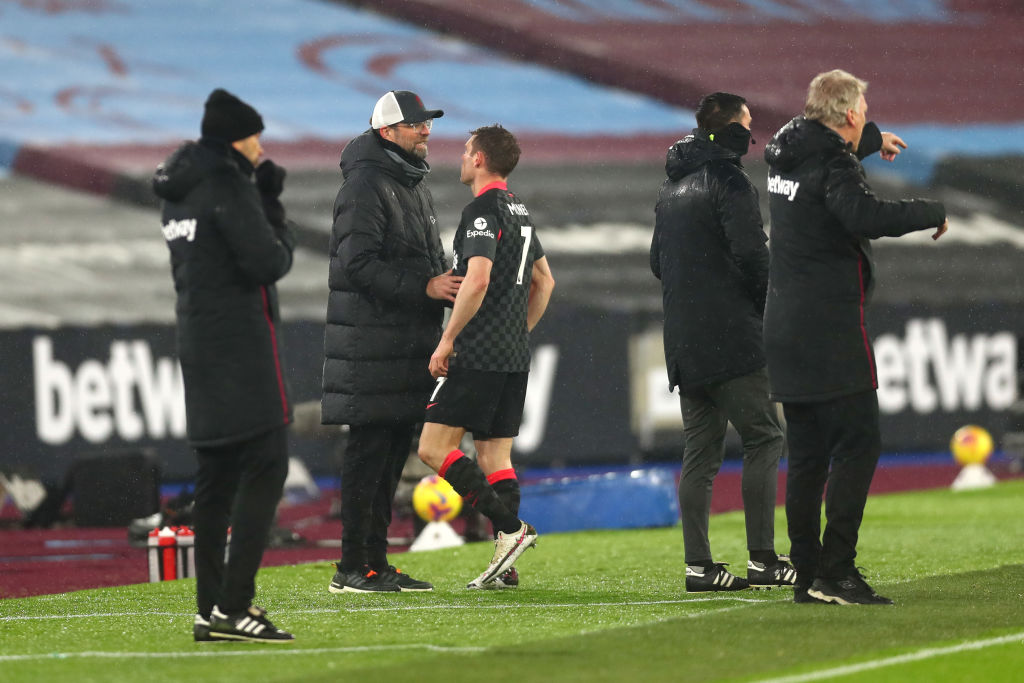 Jurgen Klopp has revealed what was said in his touchline exchange with James Milner during Liverpool’s 3-1 win over West Ham on Saturday.

With the scores level at 0-0 in the second half, the midfielder didn’t look too happy when he was replaced by Curtis Jones after 57 minutes.

But just moments later, Jones set up Mohamed Salah to break the deadlock and put the Reds 1-0 up with a marvellous curling effort, which led to Milner and Klopp bursting into laughter on the sidelines and embracing each other with a hug.

Liverpool went on to win 3-1 courtesy of a stunning counter-attack which was expertly finished off by Salah before Georginio Wijnaldum wrapped up the three points with an easy finish from Roberto Firmino’s cut-back.

Craig Dawson scored a consolation goal for the Hammers late on, but it was Liverpool’s night, with the win taking them up to third in the Premier League table.

Speaking in his post-match press conference, Klopp revealed exactly what was said between him and Milner when the midfielder was substituted off.

‘He was not unhappy,’ Klopp said. ‘At half-time we changed the formation and Milly was slightly deeper.

‘We told Millie, because he had this hamstring [that] stiffened up slightly, so we told him, ‘Be controlled, more passing than running with the ball’ and stuff like this.

‘But it was clear we will take him off, we just waited until Curtis had a proper warm-up. And then I saw the last long, long sprint Millie had and I thought, ‘Oh, we missed the point, we missed the moment’ and I was really, really worried.

‘Then he came off and said, ‘You told me I had to play deeper, now I run less and now you take me off’.

‘Then he left and came back and said, ‘Yeah, by the way, good point, good decision’.’