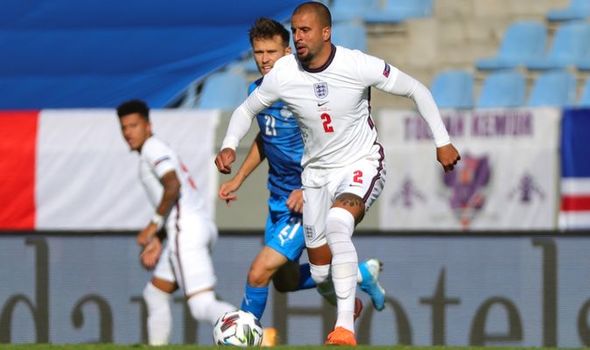 Kyle Walker was sent off during England’s Nations League match against Iceland on Saturday. The Manchester City full-back was booked in the first half before being shown a second yellow card for a late challenge.

Three Lions fans who have been watching the game from home have since taken to social media to react to Walker’s dismissal.

“On a yellow and goes flying in like that.”

A third added: “Red card for Kyle Walker. Crazy tackle when he’s already on a yellow.”

A fourth commented: “What was Kyle Walker thinking there?”

England, though, held on to beat Iceland 1-0 in Reykjavik.

Gareth Southgate thought his side had secured the victory in the last minute as Raheem Sterling stroked home a penalty he had won when his shot hit the arm of Sverrir Ingason.

Iceland also went down to 10 men, with Ingason shown a harsh second yellow card as a result.

But it would not be as straightforward for England as the home side went straight down the other end and won a spot-kick of their own after Joe Gomez was penalised for grappling with Holmbert Fridjonsson.

Unlike Sterling, however, Bjarnason could not keep his composure and fired the resulting penalty high and wide of Jordan Pickford’s goal.

The visitors then saw out the remaining seconds to pick up a victory in their first fixture following a 10-month hiatus.