Football can be a cruel game. For Sydney FC on Saturday night, it proved brutal as their sputtering A-League Men campaign took another punch to the gut in their long-awaited grand final rematch with Melbourne City.

Sydney largely dominated this clash at a rainswept Netstrata Jubilee Stadium, but they once again failed to take their chances and were duly punished at the death by Socceroo Mathew Leckie’s terrific 91st-minute strike, which caught the hosts napping and cannoned in off the right post. 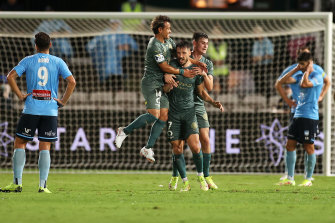 It sealed a thrilling 2-1 win for City, who move back to the top of the ladder, while the Sky Blues will be shattered after playing yet another game on their terms and failing to deliver the goods.

This was their fourth match in a row without a win and their fifth defeat for the season, leaving them mid-table and vulnerable to drifting further away from the A-League’s pacesetters given how many teams below them have played fewer matches.

It is hard to see how they can come back from a performance like this, and all the others like it that came before, to challenge for honours – unless they suddenly find a way to start finishing their chances with regularity. It is a problem that has been driving coach Steve Corica mad for months, and is the missing piece to this team that no one can seem to find.

Their plight was neatly summarised within 60 seconds in the first half. Milos Ninkovic had a shot from the edge of the box tipped wide, which ultimately led to City’s stunning opener.

From the resultant corner, Mustafa Amini’s effort was blocked, and the ball fell fortuitously for Andrew Nabbout. He looked up, saw only one defender between himself and Sydney’s goalkeeper Andrew Redmayne, who was almost 100m away, and started sprinting as fast as he could.

Nabbout unleashed a flying Jamie Maclaren, who then found Leckie at the back post. His attempt was saved by Redmayne, but the ball then ricocheted into a hapless Paulo Retre and trickled into the net.

Ninkovic levelled the scores eight minutes into the second half when the scraps from a corner fell to him at the back post, thumping the ball home via a deflection.

Two minutes later, he could have put Sydney in front from a one-on-one with Tom Glover, but was put off by the advancing City goalkeeper and uncharacteristically ballooned his shot well over the target. At the death, Leckie made him, and them, pay.

Earlier, the Newcastle Jets and Macarthur FC fought out a thrilling 2-2 draw at McDonald Jones Stadium, where Beka Mikeltadze celebrated his eighth goal of the season with a touching tribute to Ukraine.

Upon scoring his 33rd-minute penalty, after the VAR picked out a handball on Lachie Rose, the Georgian striker ran to a bag behind the goals, which he had evidently placed there earlier. It contained a white T-shirt with the Ukrainian flag drawn on it, which he held aloft to the crowd and then draped over the nearby advertising hoardings.

Tommy Uskok had put the Bulls in front 12 minutes earlier, with goals in the second half from Tommy Oar and Eli Babalj – his first in the A-League for almost a decade – ensuring the points would be split.

Meanwhile, Western Sydney Wanderers’ double-header against Wellington Phoenix on Sunday has been delayed due to the incessant rain across NSW. According to an A-Leagues statement, the surface at CommBank Stadium has been unable to drain and deemed unfit for play due to the rising Parramatta River and the “increased level of the surrounding water table”.

Is Tottenham vs Dinamo Zagreb on TV tonight? Kick-off time, channel and how to watch Europa League fixture