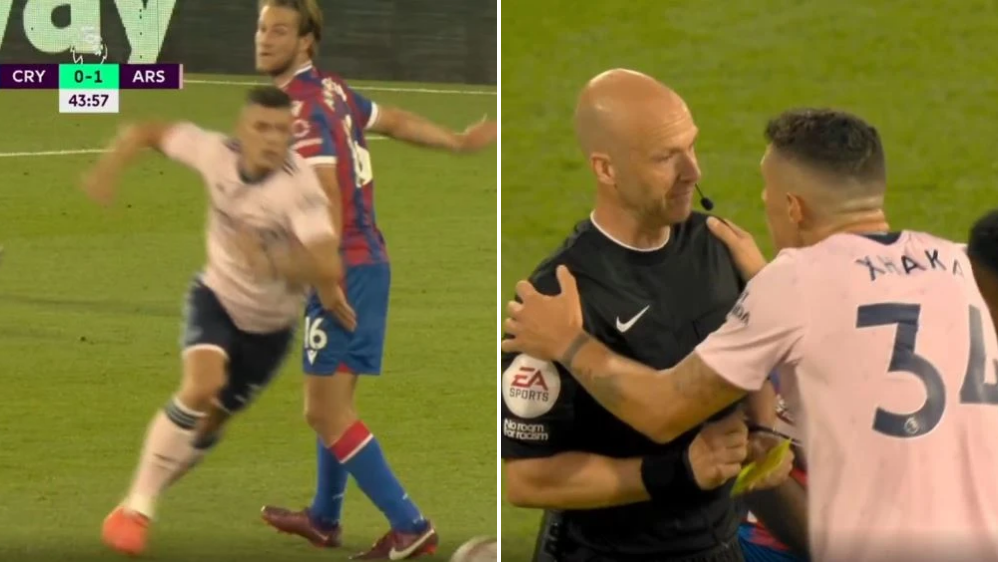 Xhaka was booked for simulation in the first half, throwing himself to the ground after anticipating a tackle from Joachim Andersen.

The 29-year-old Switzerland international has been handed a yellow card 53 times in the top-flight since his 2016 arrival, with 10 of those coming last season.

‘Let’s just wait until the second half and see if another yellow comes out,’ former Gunner Dixon said about Xhaka.

‘That is a dive, quite rightly booked and for a man of his experience, stupid!’

Gary Neville says Granit Xhaka will ‘always let you down at some point in the season’ and Arsenal should prepare for that eventuality.

Xhaka has been a divisive figure among the Gunners fanbase, partly due to his poor disciplinary record.

However, Xhaka has consistently been picked as a starter by every manager he’s played under at the Emirates Stadium – Arsene Wenger, Unai Emery and now Mikel Arteta.

‘Even Xhaka tonight, he got booked. I always think he is going to go and let you down,’ Neville told Sky Sports.

‘He is always going to let you down at some point in the season, so you think, you should plan for that now. You know it’s coming.’

Xhaka recently hit back at pundit Neville for calling him a disgrace last season.

Neville was furious with Xhaka following Arsenal’s defeat to Newcastle in the penultimate game of the 2021-22 campaign, a result which saw the Gunners surrender their advantage in the Premier League top four race.

Mikel Arteta’s fifth-place side eventually missed out on a Champions League spot for 2022-23, with north London rivals Tottenham securing fourth instead.

Xhaka came out after the loss and appeared to take a jab at Arsenal’s young players, saying: ‘If someone isn’t ready for this game, stay at home.

‘It doesn’t matter your age. If you’re nervous, stay on the bench or stay at home. You need people to have the balls to come here and play.’

Neville responded in his post-match analysis, adding: ‘I don’t know who he’s having a go at, I hope he wasn’t having a go at the younger players…him?

‘I tell you what he’s been a disgrace at times over the last four or five years, getting sent off recklessly. He’s left it up in the air there, that was nothing there.’

Xhaka, though, responded to those comments and feels that he was misunderstood.

‘Everyone knows we have a very young team, but this is not the problem of young or old,’ Xhaka told ESPN.

‘This was not against our young players. I put myself there as well. We were not ready for this game, to fight.

‘We knew if we won this game, we would have another final against Everton at home [on the last day of the Premier League season].

‘The thing is about the mentality – when you have something, you can take it – it is not the first time we let it down.

‘A lot of people start to think, ‘Yeah he’s speaking again,’ and stuff like this, but maybe they didn’t understand what and how I mean it.

‘If I can say now something about this interview, I told you: this has nothing to do with the young players, it is do with us all together.

‘If not, you are out of the Champions League places.’