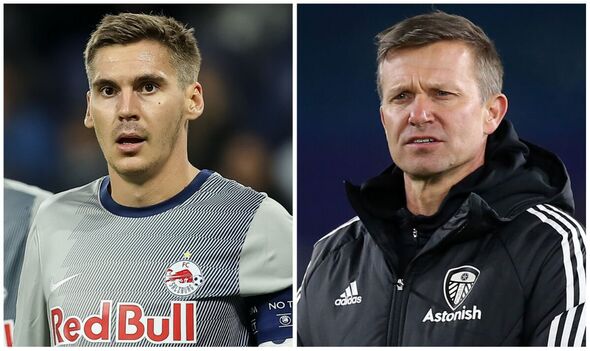 Leeds United are edging closer to completing the signing of Red Bull Salzburg captain Max Wober with Jesse Marsch raiding his former club once again to strengthen his squad. The Austria international is expected to seal his move to join the Premier League side as their first signing of the January transfer window.

The 24-year-old is set to clinch a £14million move to Elland Road after it emerged Salzburg were open to selling the defender, with Leeds moving quickly to snap him up in a cut-price deal. He is expected to sign a five-year contract before making the move to Elland Road.

Wober can play as a centre-back or left-back and has featured largely as the latter for the Austrian champions this season. He played in both matches against Chelsea in the Champions League group stage as Salzburg finished third in Group E.

It is his versatility, in addition to his familiarity of history of working well under Marsch’s management at Salzburg, which made him an ideal signing for the American. Leeds have conceded 29 goals in 16 games in the Premier League and it is hoped that Wober’s arrival will help them tighten up at the back.

According to The Athletic, Leeds made progress with Salzburg chiefs last week in an attempt to thrash out a deal after making their interest known, with Wober set to become the fourth player to have worked under Marsch to join him at the club.

He will reunite with former team-mates Brenden Aaronson and Rasmus Kristensen, who arrived for a combined £42m from Salzburg this summer. Tyler Adams also linked up with Leeds after signing from RB Leipzig, where he worked under Marsch for a short time before he was sacked by the Bundesliga club.

The report adds Leeds also had targeted Philadelphia Union’s Kai Wagner as a possible candidate to fulfil their wish for another left-back, but it now appears that Wober will slot into the role.

Wober, who played for Ajax and Sevilla in the early stages of his career, made 125 appearances for the club and scored nine goals after signing for the club in 2019. He cost £10m to sign from Ajax and became the most expensive signing in Austrian Bundesliga history as a result.

Wober has also won 13 caps for Austria and is considered a regular part of the national team setup. He is expected to be able to link up with the squad once his medical has been completed after personal terms were agreed.

The Yorkshire outfit are currently 14th in the table and are just two points clear of the relegation zone following their goalless draw with Newcastle United on Saturday.

However, Marsch’s side do have a game in hand over the teams beneath them as they prepare to face West Ham at home on Wednesday.