JACK GAUGHAN: Leeds ride the wave of optimism as bundle-of-energy boss Jesse Marsch mirrors the frenzied atmosphere in the Elland Road stands in their 2-1 win over Wolves

As is his way, Jesse Marsch was already celebrating before a ball had been kicked. Firing up a crowd that needed no stoking, the Leeds United manager genuinely looked just as he did when the winner went in later in the afternoon, both fists clenched and arms waving.

And that was just in response to stepping back inside the technical area after three months away.

Marsch, a bundle of pent-up energy following a summer of change, saw Leeds play in his image, some chaos theory —although not nearly as much as under predecessor Marcelo Bielsa — and a difference in defensive shape. These aspects had existed during last term’s dramatic escape mission but, with a full pre-season, they now feel more defined. 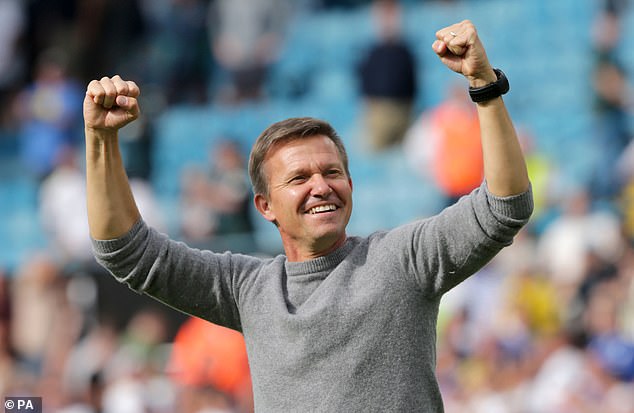 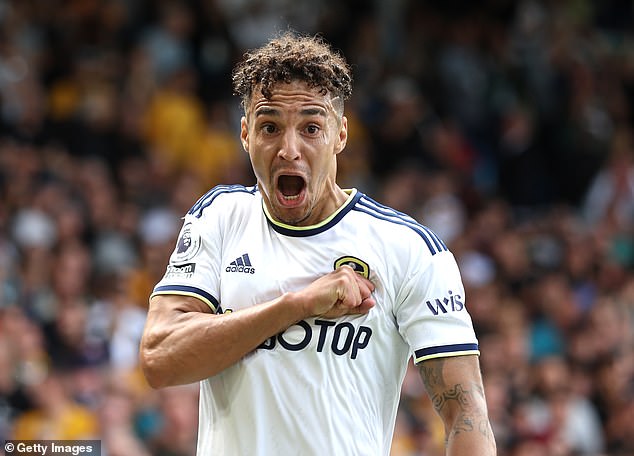 They are by no means perfect, with an equally reshaped Wolves unfortunate to leave with nothing, but the ripples of a wave appeared. And Leeds are best when there is one of those to ride. That was certainly the case on Saturday as Rodrigo’s strike and an own goal from Rayan Ait-Nouri saw Leeds start their season in style.

The sales of Raphinha and Kalvin Phillips have allowed Marsch to put his own stamp on this squad, with his former Red Bull Salzburg winger Brenden Aaronson taking the plaudits on debut. Rasmus Kristensen, also bought from his old employers, improved at right back after a shaky start. Tyler Adams, whom he coached briefly at RB Leipzig, patrolled midfield. There is more to do, with Paris Saint-Germain’s Arnaud Kalimuendo next on the list to lighten the returning Patrick Bamford’s load.

Just do not put the idea of this being a Marsch team to the man himself. ‘I don’t like saying I, me, my. I like saying we and ours,’ he said. ‘It has never not felt like our team. From day one, I consider every player our player. Not a player from the past, or I robbed these guys (from others). I know it’s interpreted like that but it’s about maximising what we get out of everybody.

‘We’re making progress. We were much better with the ball, the build-up and the phases. The second goal was a good example of how we want to play. In every phase, I feel like we’re growing. There is still a lot of work to do but I feel we’re growing.’

Kristensen, who grew into the game after being at fault for Daniel Podence’s opener, explained that the atmosphere he labelled as ‘unbelievable, incredible’ surpassed the high expectations those around the club had impressed on him when signing. ‘It doesn’t compare to anywhere I’ve played before — this tops everything,’ said the Dane.

Marsch revels in the different ways in which sporting director Victor Orta sells Leeds to prospective signings. ‘Well, there’s the Premier League and then there is Elland Road, right? We love it.

‘Even in the recruitment process, speaking to the players coming in, it was translating the feeling of what it means to play for this club. I knew it because I knew the history but (at the same time) I didn’t know it. I had a crash course in what that means.

‘If you sit and listen to Victor in these meetings, and the way he is able to explain why it’s special and why certain people fit and should come here, he’s an incredible recruiter. I look forward to that every time to see what kind of twist he has on why they belong here.’ 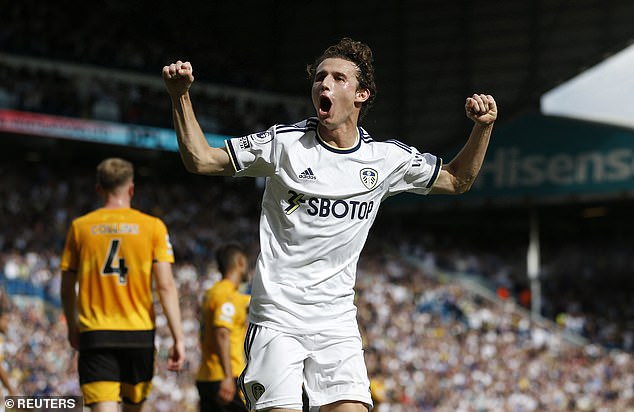 This, Leeds hope, acts as a springboard not to become embroiled in the sort of scrap that almost saw them tumble into the Championship. ‘Someone said to me that we only won four matches here last year and that’s disappointing to hear,’ Marsch said. ‘Our fans deserve better.’

Wolves are in transition themselves, ditching the back three that served them so well to a four and club captain Conor Coady is looking like the fall guy of Bruno Lage’s tactical shift. They attacked with more purpose and have added guile with the £35million signing of Goncalo Guedes from Valencia, which they should completed this week. Midfielder Leander Dendoncker believes they need more bodies, with five first-team players currently out.

‘Leeds brought a few fresh legs on and we got a little bit tired near the end,’ Dendoncker said. ‘Until then we played the perfect game — but we just didn’t score.

‘Our bench was young.’