Leicester City spurned a two-goal lead to draw 2-2 with Napoli at the King Power Stadium in the opening round of fixtures in the Europa League.

The Foxes opened the scoring after just nine minutes when Harvey Barnes crossed for Ayoze Perez to slot home from close range.

The hosts were made to absorb a great deal of pressure from the Italian side as Victor Osimhen and Lorenzo Insigne both went close but were faced with an inspired Kasper Schmeichel in the Leicester goal.

Patson Daka then thought he had doubled Brendan Rodgers’ side’s lead on the hour mark but his strike was ruled out by VAR for the most marginal of offsides. But moments later it was 2-0 as Kelechi Iheanacho found Barnes and the Englishman rifled home a left-footed drive.

Osimhen eventually found a way past Schmeichel midway through the second half, flicking the ball over the Dane after some sensationally quick link-up play with Insigne and Fabian Ruiz. 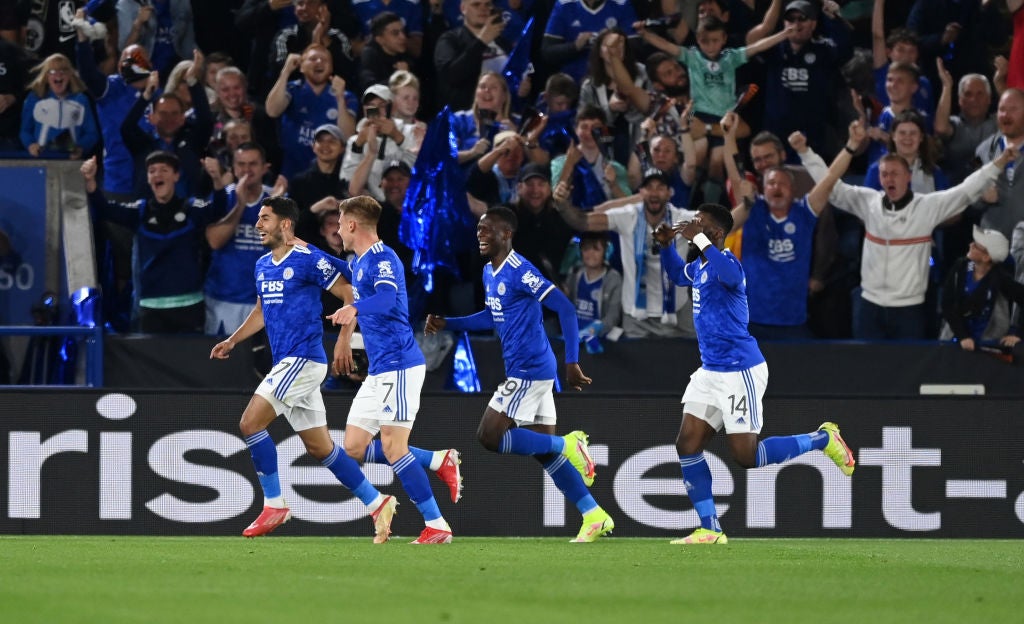 And the comeback was complete three minutes from time when Osimhen rose brilliantly to power a header into the back of the net.

Here are five things we learned from the match tonight.

Rodgers all in for Europa League

You only have to look at Rodgers’ starting line-up for tonight’s match to know that he means business in the Europa League this season. Don’t be deceived by the absence of Jamie Vardy. Aside from the omission of the former England international, this was about as strong a team as the Northern Irish coach could field.

James Maddison was also left on the bench, but his poor start to the campaign points more towards him being dropped rather than rested.

Barnes, Daka and Iheanacho linked up beautifully early on, with Daka and Barnes then putting in an absolute shift to protect their lead. With Perez drifting in between the lines too, Napoli were always forced to stay alert when it came to a potential counter-attack.

With a host of options in their squad, the Foxes are showing the strength in depth needed to go deep in Europe. 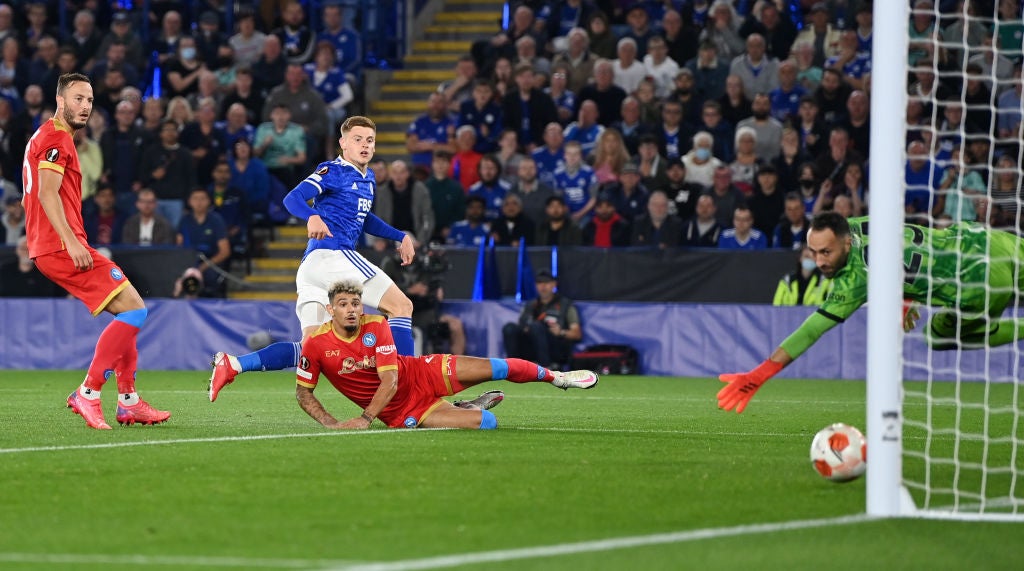 Barnes made his debut for Gareth Southgate’s England side in October of last year, coming on as a substitute in a 3-0 win over Wales. Since then, the Foxes attacker suffered a major knee injury in February which put him out for the final 12 Premier League games of the season.

But tonight Barnes made a statement as he was a thorn in Napoli’s side all evening. His superb cross for the opening goal showed the pace, quality and directness that may well turn the head of the national team coach.

And the goal capped things off as he drifted past the onrushing defender before finishing with real class.

It is unrealistic to suggest Barnes could force his way into England’s starting XI by the end of the season. But with Jamie Vardy beginning to slow down, Barnes could well be the next English international to fly the flag for Leicester.

Napoli have done well to hold on to Insigne

How Lorenzo Insigne has never secured a move to one of Europe’s ‘giants’ is a question even the most knowledgeable of Italian football thinkers would struggle with.

Inter Milan tried to sign him in the summer but failed to get a deal over the line. They will now hope to secure Insigne when his contract expires at the end of the season. And tonight was a perfect example of what they could inherit.

The 30-year-old, who shone in Italy’s 2-1 win over Belgium at Euro 2020, was as vibrant as ever, constantly harassing Timothy Castagne down the Leicester right. He came within a whisker of pulling Napoli level shortly before half-time and should have had an assist but Hirving Lozano couldn’t flick home his wicked delivery. He was also involved in the wonderful build-up play for Osimhen’s first goal.

Ever a team player, Insigne manages to get through a tremendous amount of defensive work. Wearing the captain’s armband for the club he has been a part of for 15 years, he is an example to the rest of the team when it comes to skill, intelligence and hard work.

Schmeichel one of the most underrated keepers in world football

Schmeichel has been instrumental in winning the Premier League title and FA Cup for a club outside of the ‘big six’. And yet still you feel like he doesn’t get the credit he deserves.

When people discuss the best keeper in England’s top flight, the talk naturally sways to Brazilians Ederson and Alisson. But Schmeichel consistently puts in performances like this evening, saving his side on numerous occasions.

The Dane made some brilliant stops in the first half, keeping Napoli out on four occasions before the break. And his distribution is also underrated. He started several counter-attacks with some superb kicks and throws.

But he could do nothing about either of Osimhen’s goals. 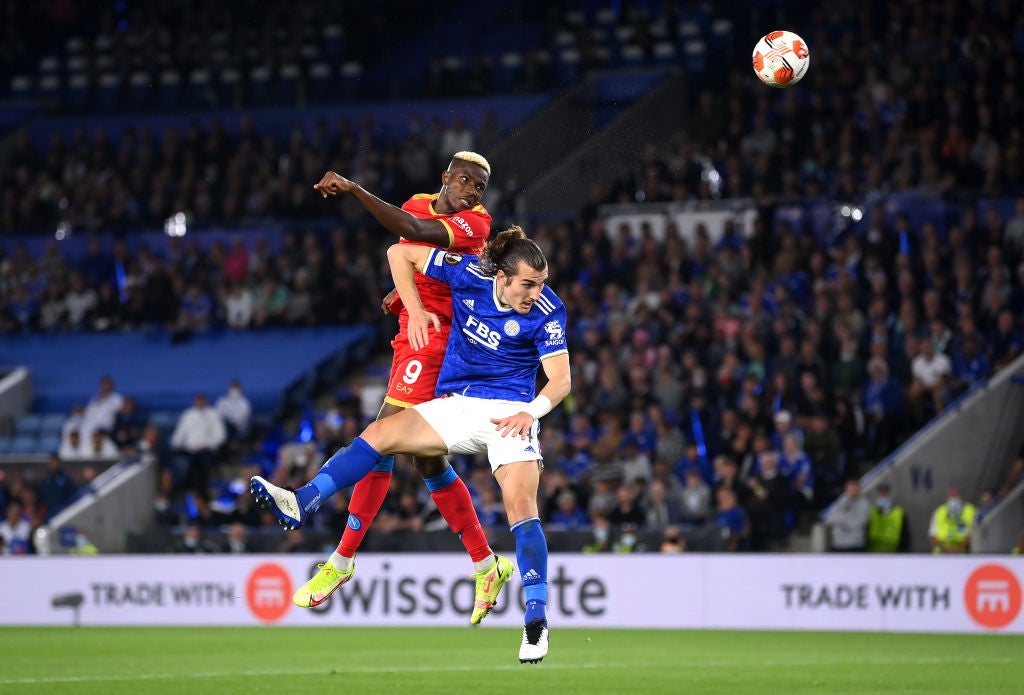 Even before his goals this evening, Napoli striker Victor Osimhen had turned the heads of everyone inside the King Power. His pace, strength, intelligence and work rate were to be admired as he led the line superbly for the Italian outfit.

That’s before you even get to his quite breathtaking finishing. The interchanges between him, Insigne and Ruiz for the first goal were something to behold. And the stupendous leap for his second was a show of world class quality.

He is living up to his billing as the most expensive African footballer of all time following his move from Lille for €70 million in 2020. And at just 21 years old, this remarkable young talent looks set to go right to the top of European football.