Barcelona presidential frontrunner Victor Font wants Pep Guardiola to return to the club and has “no doubt” Lionel Messi will stay.

Current president Josep Maria Bartomeu resigned earlier this week, along with his board of directors, ahead of an expected vote of no confidence next month.

It comes after months of widespread criticism over the club’s worsening finances and the team’s decline on the pitch, which came to a head with their 8-2 defeat to Bayern Munich in the Champions League quarter-finals in August.

Font has quickly become the frontrunner to succeed Bartomeu and exclusively told Sky Sports News he has a clear plan to bring back the glory days to La Liga giants involving the old Barca dynasty breathing new life into the current one.

“Replacing the best generation the world of football has ever seen, which I believe we have had over the last decade, is a big challenge,” Font said.

“Particularly at a time when competition is intense and many clubs are owned by very powerful owners.

“FC Barcelona also need a significant investment to rebuild the stadium and all in a world which has been hit with one of the worst crises ever (coronavirus).

“It is clear we need a very solid plan to meet these challenges and this is what we have been doing over the last few years. 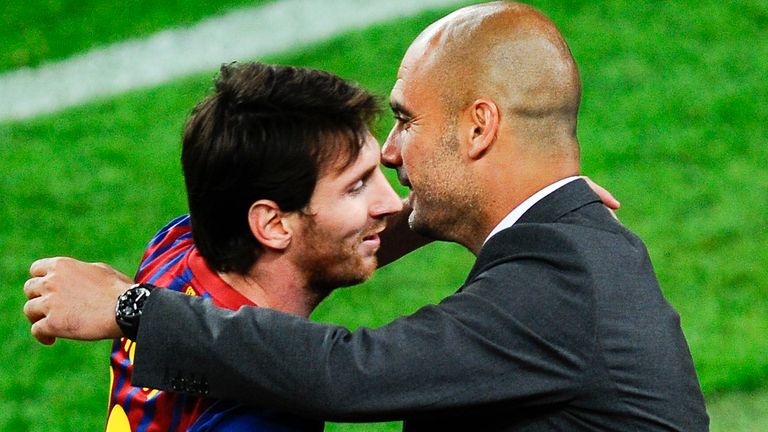 “It is our intention to build a very strong and competitive project and we are very lucky at Barca that we inherited a style of play that Johan Cruyff instilled throughout the organisation.

“And most of the best professionals who know about this style are also fans and love the club – like Pep Guardiola, Xavi, Iniesta, Puyol.

“They are all legends that love Barcelona but do not work for Barca today – we need to bring them back to ensure we will have a very competitive project.

“The only thing Messi needs is to know he is part of a competitive project that aspires to win the next Champions League.

“We have no doubt that if we basically have the honour to take the helm of FC Barcelona we will be able to achieve that (Messi staying).”

Bartomeu did not go quietly as he resigned from his role as Barcelona president, revealing the club had accepted a proposal to join a future European super league as he stepped down.

Sky News has learned that financiers are assembling a $6 billion (£4.6 billion) funding package to assist the creation of what could become known as the European Premier League.

More than a dozen teams from England, France, Germany, Italy and Spain are in negotiations about becoming founder members of the competition.

However, Font has been left bemused by Bartomeu’s statement on a competition that doesn’t exist – although hasn’t ruled out anything himself at this stage.

“I was very surprised by that statement because I know the project is not a reality at this moment in time,” Font added.

“So joining a competition that does not exist is kind of weird to say the least.

“If we have the honour to take the reigns of FC Barcelona we would be very much interested in understanding what type of alternatives there are and what type of interesting projects there are in the world of football and then based on that, we will make decisions.

“When I’ve been asked about this in the past I have always said that making whatever top European competition better, which is currently the Champions League, is something we should aspire to do.

“But at the same time having a strong national championship is good for the sport and footballing ecosystem.”

What does Bartomeu’s exit mean for Messi?

Messi looked set to leave Barcelona this summer after falling out with the club’s hierarchy. But now Bartomeu and the rest of the board have resigned, what does it mean for the future of Messi?

Messi demanded to leave Barcelona over the summer, criticising the board publicly in the process, after his relationship with the club’s president had soured.

Although Barcelona managed to keep Messi, in part due to his €700m release clause, their chances of retaining the Argentina international beyond this season appeared remote with his contract set to expire, but has the situation now changed?

Who will prevail in huge Newcastle vs Everton relegation six-pointer?