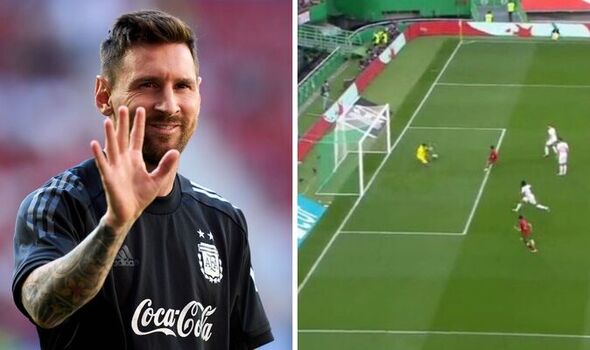 Lionel Messi climbed the all-time international goalscoring charts with a stunning five-goal haul for Argentina in their 5-0 win over Estonia. The friendly, that was played in Pamplona, saw the 34-year-old enjoy a happy return to Spain as Lionel Scaloni’s side ran riot against the Eastern European minnows.

It’s been a tough campaign for Messi on an individual level following his switch to Paris Saint-Germain from Barcelona last summer.

His performances have been faced with scrutiny at the Parc des Princes but Messi sent a timely reminder of his remarkable quality ahead of possibly his last World Cup.

The game was just eight minutes old when Messi made his mark by netting from the penalty spot and he would add his second on the stroke of half-time to double Argentina’s advantage with a brilliant finish.

Messi would then complete his hat-trick when he arrived in the box to get on the end of a low cross.

Goals number four and five would follow in the second half as Messi climbed above Hungary’s Ferenc Puskas in the international scoring charts.

He has now netted 86 times for Argentina and is already just three shy of levelling Mokhtar Dahari’s 89-goal haul from the 1970s.

The Manchester United man leads the way with a world-record 117 goals after adding two to his tally tonight against Switzerland.

Ronaldo was on target twice in the first half as Portugal led their Nations League opponents 3-0 at the break.

Yet there was a moment to forget for Ronaldo when he squandered the chance to secure his hat-trick.

He could only turn a ball across the face of goal wide, to the surprise of everyone – including himself.

In midweek, Messi picked up another international trophy when he starred in the first edition of Finalissima – a contest that sees the winners of the Copa America and European Championships go head-to-head.

It means he is now technically level with Ronaldo when it comes to honours won on the international stage.

Messi won the Copa America last summer with Argentina, while Ronaldo won the 2016 European Championships and Nations League in 2019.

The PSG man is confident his side have what it takes to beat anyone in Qatar.

“We keep growing, that’s what we are looking for. We are working on a day-by-day basis in order to improve further. We continue to say that we are not the top favourites, but we will put up a fight against anyone, because this group is hopeful, it has clear goals,” Messi said.

“We must keep improving. Now we have important matches in September, we need to work and improve in order to arrive the best way possible at our World Cup debut.”