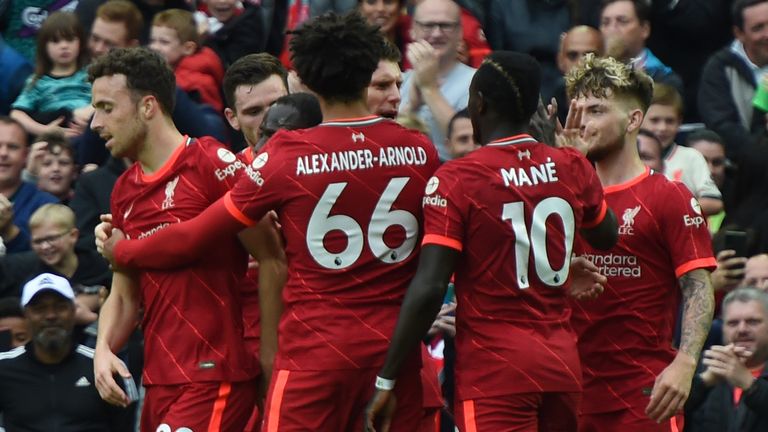 Diogo Jota was on target as Liverpool drew their penultimate pre-season friendly 1-1 with Athletic Bilbao in front of a near-capacity Anfield crowd – although Andy Robertson’s injury took the shine off the occasion.

For the first time since the pandemic, large numbers of supporters were back at Liverpool’s home ground – although trouble with the ticketing system forced a 30-minute delay to kick-off.

Once the action eventually got under way, those fans did not have to wait long to see Liverpool score, though, with Jota producing a fine finish in the box on 13 minutes to get the Reds up and running.

They should have added to that lead during the first half, with Jota, Mohamed Salah, Sadio Mane and fit-again Virgil van Dijk – who got 71 minutes of game time – all going close. However, there were concerns for Liverpool’s left-back when Robertson landed awkwardly on his ankle after making a block. He hobbled off with the help of two physios and was unable to continue.

Alex Berenguer equalised for Athletic Bilbao on 53 minutes and while Liverpool were not as dominant after the break, they hit the woodwork when the impressive Harvey Elliott bent a left-foot shot against the far post, and looked in good shape ahead of their Premier League opener at Norwich next Saturday, which is live on Sky Sports. The match was delayed by half an hour due to problems getting the 75 per cent capacity crowd into the stadium and it appeared it was the visitors who had adapted best to the circumstances, with Inaki Williams fizzing a cross through the Liverpool six-yard box before his strike was ruled out for offside and captain Iker Muniain lashed into the side-netting.

Jurgen Klopp named a strong XI, with Harvey Elliott in midfield on the back of his impressive pre-season, along with Naby Keita and James Milner. At the back, there were more minutes for Virgil van Dijk as he continues to step up his recovery, while Mohamed Salah, Sadio Mane and Diogo Jota were up front.

But Liverpool soon got into gear and their returning supporters were celebrating after Naby Keita picked up the ball from a poor pass out from the back by Athletic Bilbao, fed Mane and his neat lay-off allowed Jota to clinically slot in the opener.

The Portuguese almost made it 2-0 moments later when he met Salah’s cross to the back post, but Inigo Martinez managed to head the ball off the line. A flurry of Liverpool chances followed for Trent Alexander-Arnold, Elliott and Salah, while Mane was also denied by the offside flag.

Van Dijk – making his long-awaited return to Anfield – had a couple of headed opportunities from corners but he and Joel Matip were made to work on occasions at the other end, with Muniain’s fine pass over the top leading to another Alisson stop from Williams, before Berenguer wastefully shot over from six yards when he seemed certain to level.

It was a dominant first-half performance from the Reds – however, Robertson’s painful injury on the stroke of half-time rather spoiled the buzz, with the left-back landing awkwardly when he made a block and forced off with what appeared to be an ankle injury.

Owen Beck – the great nephew of Ian Rush and a day shy of his 19th birthday – came on at half-time for the Scotland international and while he appeared to settle quickly, sending a couple of crosses into the box, Athletic levelled just eight minutes after the restart.

Williams drove down the left flank and fed Oihan Sancet in the box, he scuffed the ball onto Berenguer who tapped in at the far post.

A flurry of substitutions just after the hour mark spoiled the flow of the game but Keita conjured up a chance for Mane, which he blasted straight at the goalkeeper, and Elliott continued to impress, smacking a superb effort against the corner of the upright and bar after dancing in from the right flank on 75 minutes.

Eighteen-year-old Tyler Morton almost had a dream introduction, shooting just off target with his first touch, but while there was no winner for the Reds, this was an important and useful workout with the Premier League season less than a week away. Although, attentions and concerns will undoubtedly turn to the fitness of Robertson…

“This is the moment we’ve been waiting for [with fans back]. Last season it was very quiet in here but to have the fans back today was special for us all.

“First half was really good, we were all over them and didn’t give them too many chances. Second half, as expected, we got a bit tired, a bit leggy and gave them the ball a bit too easily.

“It was a decent performance, we got out of it what we needed to. The big downside was Robbo coming off injured but other than it was quite a pleasing performance.

“I haven’t seen him [Robertson]. It’s going to be quite bad if Robbo has to come off. It’s not something he normally does. It’s disappointing to see but I’m sure he’ll bounce back as soon as he can.”

Liverpool play their final pre-season fixture against Osasuna at Anfield on Monday before kicking off their Premier League campaign at Norwich on Saturday live on Sky Sports from 4.30pm; kick-off 5.30pm.

Mikel Arteta insists Arsenal are heading in the right direction