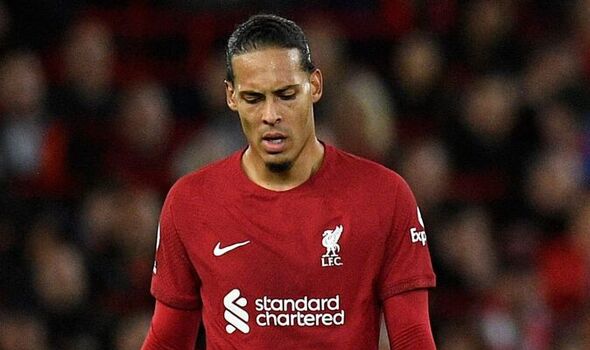 Virgil van Dijk’s imperious unbeaten home record in the Premier League with Liverpool has finally come to an end – nearly five years after he joined the club. The Dutchman, who captained the Reds in the absence of Jordan Henderson and James Milner, had not lost in 70 home Premier League matches prior to Saturday night’s contest, as Leeds ripped up the script to snatch all three points.

Van Dijk did miss the majority of the last campaign after he suffered a serious knee injury in the Merseyside derby against Everton in 2020, as Liverpool endured a miserable mid-season wobble that saw them lose at home to Brighton, Burnley, Everton and Fulham in his absence.

Nonetheless, there was nothing he could do to stop Leeds’ snatch-and-grab as Crysencio Summerville fired home the winner for Jesse Marsch’s side.

The Reds have now won four, drawn four and lost four in the Premier League this season – the same record Roy Hodgson’s 2010/11 Liverpool side had at this stage of the season.

Liverpool are now in ninth place after suffering their first home defeat of the Premier League season.

It’s the first time they have lost at home in front of supporters since March 2020 when Atletico Madrid left Anfield 3-2 victors in the Champions League.

They were also undefeated in 84 Premier League outings at home in front of fans, since losing to Crystal Palace in April 2017.

Leeds were ahead inside just four minutes when Joe Gomez sent a careless back-pass – that evaded Alisson – across the face of goal.

Rodrigo Moreno was on hand to finish to stun Anfield after Liverpool had started the game on the front foot.

Liverpool then levelled things up through Mohamed Salah, who was able to convert at the back post from Andy Robertson’s cross.

Yet the Egyptian was rather wasteful in the second half as Darwin Nunez also missed two golden opportunities, much to the brilliance of goalkeeper Illan Meslier.

Leeds then dealt the Reds a hammer blow when the lively Summerville popped up with the winner with just minutes to play to send the away end into raptures.

Jurgen Klopp did not wish to blame any of his players but he did accept that his side’s defending was simply not good enough.

“A team performance is always made up of individual performances. One leads to the other. You can watch this game completely, you cannot defend like we did for the second goal but we did, that’s why we lost,” he said.

“Otherwise, it would have been a point and we go from there. Now we have nothing and it feels completely different.”

When asked how Liverpool will recover from this, he added: “We have to bring our quality on to the pitch and we will fight against it. We had problems from the first day, injury wise.

“Players have had to play from the first day. It’s our situation and it means we have to help ourselves, and that is what we will do.”