Leeds United left Liverpool anti-European Super League t-shirts in their changing room at Elland Road and Jurgen Klopp was fuming as his team refused to wear them.

The hosts jogged out onto the pitch with t-shirts which opposed the controversial new tourament. On the front it read: “Earn It.” And on the reverse it said: “Football is for the fans.”

But Liverpool, who are one of the six Premier League clubs invited into the ESL, did not don the white attire.

“I heard already there are warm-up shirts or whatever. We will not wear them because we cannot,” Klopp said.

“But if somebody thinks they have to remind us you have to earn the Champions League, that’s a real joke.

“It makes me angry as well, they were in our dressing room. If it was a Leeds idea, thank you very much. Nobody has to remind us, they should remind themselves.” 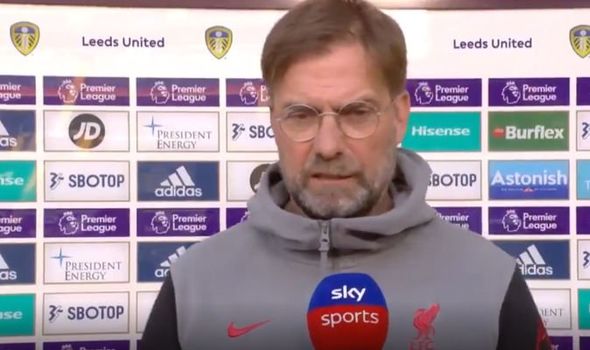 This was not the only protest taking place at Elland Road ahead of the Premier League clash.

An aeroplane flew over the stadium with a banner attached which read: “Say No To European Super League.”