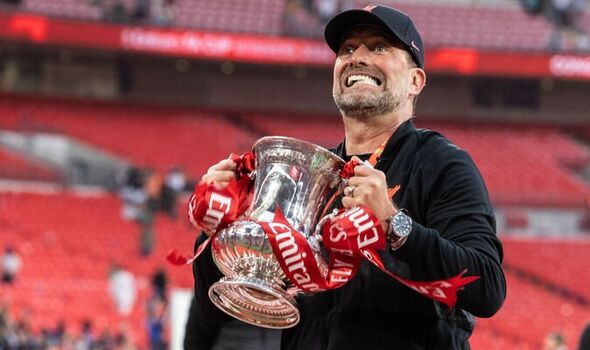 Can a German be an English national treasure? Jurgen Klopp has won the lot now in his time in England with Liverpool ensuring his sainthood on Merseyside yet his appeal spreads far wider. There have been few more charismatic football managers and if he is a better winner than a loser the latter happens so rarely we only usually get to see that toothy, hail-fellow-well-met grin.

On Saturday he became the first German to manage a team to the FA Cup, edging out his fellow countryman Thomas Tuchel despite losing two of his talismen in Mo Salah and Virgil van Dijk during a draining 120-minute plus Wembley arm-wrestle.

The quadruple may end up being just beyond Liverpool this season but to have shaped a team still theoretically capable of winning it in the middle of May bathes Klopp in a glorious light. For the vanquished Tuchel the method of execution – penalties – was the same as the Carabao Cup final between these two sides in February. The outcome the same despite his decision to stick with Edouard Mendy this time rather than substitute his goalkeeper for spot-kicks.

Klopp and Tuchel go back a long way with this showpiece their 19th meeting as managers. Tuchel still has only three wins against Klopp on his CV. This was the two rivals’ first FA Cup tie against each other.

The competition might not hold quite the lustre of its past – it is a sad state of affairs when kick-off is tweaked to avoid a clash with Eurovision – but the weight of its 150-year history still lends the final a special resonance. For the respective managers it was a special occasion. Caps briefly off for the national anthem, they stood proudly with their teams before kick-off.

Klopp had the opportunity to deliver Liverpool’s first trophy in the competition for 16 years. While some of his previous selections during his time at Anfield may have led to justifiable questions over his level of interest in the competition, he had gone out of his way in the build-up to stress this was not just another match in Liverpool’s crowded quadruple quest.

For Tuchel, back for another tilt at Wembley glory, it represented a chance to prove that whatever the inconsistencies of their Premier League campaign and the disappointment of their Champions League defence Chelsea can still stand toe to toe with English football’s top guns on any given day.

It isn’t always the case but Klopp was Mr Cool in comparison to his neighbour in the Wembley technical area. There is something of the Basil Fawlty in Tuchel’s stressed-out touchline mannerisms, his angular frame contorting at every misplaced pass, a rant at a perceived refereeing injustice never far away.

Chelsea’s slow start had him ticking from the off and within 15 minutes Romelu Lukaku found himself in the role of the misfiring Austin 1100 Countryman being given a damn good verbal thrashing from the touchline. For his part Klopp spent most of the first half with his hands in his tracksuit pockets, a reflection of his contentment at his side’s dominance and the success of his ball-over-the-top to Luis Diaz tactic.

He was even relaxed enough to laugh out loud when Ibrahima Konate fired a ludicrous shot well over the Chelsea bar. But as Chelsea emerged from their chrysalis after the break, Klopp grew more animated as his men spurned chances and the game went into extra time, falling to his knees at one point as Sadio Mane went down under Antonio Rudiger’s challenge to beg for a free-kick that never came.

In the end, inevitably, it came down to penalties and as Mane had his spot-kick to win it saved, it was Tuchel’s turn to drop to his knees this time in grateful thanks. It was not to be though for Tuchel as Liverpool – and Klopp, who ran half the length of the pitch to embrace his goalkeeper at the end, prevailed again.

England Euro 2020 squad: When will Gareth Southgate’s squad be announced?