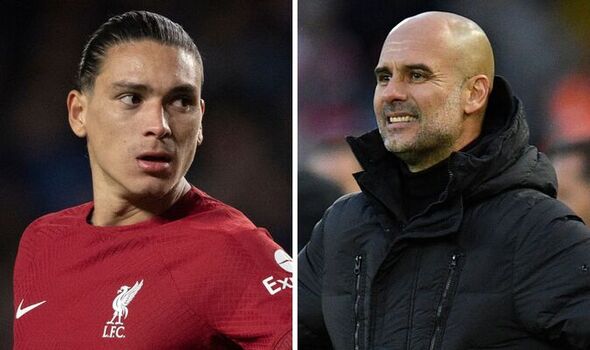 Injuries to Jurgen Klopp’s squad have taken it’s toll on Liverpool’s season, but Darwin Nunez’s knock could create an opportunity to copy Pep Guardiola at Manchester City. With both Luis Diaz and Diogo Jota out for several months, Klopp is short of options to step into attack when rotating his side.

The Liverpool boss has adopted a 4-4-2 system in recent weeks to good effect and helped them secure a memorable 1-0 win over City last week. They beat West Ham by the same scoreline this past Wednesday, but Klopp changed the system back after Nunez was subbed off as a precaution after he complained of a hamstring problem at half-time.

Changing formation may be the best way for Klopp to rotate his squad between now and the start of the World Cup. Liverpool still have seven fixtures in that time, starting with today’s fixture away to Forest and Klopp will want to change things around in the coming weeks.

If Klopp decides to give Nunez a rest from the starting line-up and not risk any further injury, that could create an opportunity to push Trent Alexander-Arnold further forward. Guardiola has had great success in molding Joao Cancelo into a makeshift winger at times this season.

City’s free-flowing formation has often seen Cancelo occupy the furthest-forward position out wide with the likes of Phil Foden and Riyad Mahrez moving more central. In recent weeks, Nathan Ake, Ruben Dias and Manuel Akanji have then moved into a back three.

Salah could then move more central to play in a front two alongside Roberto Firmino, giving both players the ability to roam across the frontline. A midfield three of Thiago, Jordan Henderson and Fabinho would likely be needed to bring some stability and would then bring the England international into play to cover Alexander-Arnold when needed.

Fabio Carvalho could play on the left flank, ahead of Andy Robertson who would be the biggest sacrifice in this formation shake-up, as he would likely need to sit back in a back three alongside Joe Gomez and Virgil van Dijk.

But Klopp has spoken about Liverpool’s need to reinvent themselves and games against the likes of Nottingham Forest will be good opportunities to trial new things. And giving key players such as Nunez a rest when needed could prove crucial in the club not suffering any more injury setbacks.