Jordan Henderson is reportedly set to miss up to 12 weeks of action with the Liverpool captain to discover today whether he needs surgery on his groin.

Henderson limped out of the Reds’ deflating 2-0 Merseyside derby defeat at the weekend to add to Jurgen Klopp’s forever-growing injury list.

Should Henderson require surgery for his groin, it would end his Liverpool season and put his hopes of appearing at this summer’s Euros in major doubt, according to The Sun. 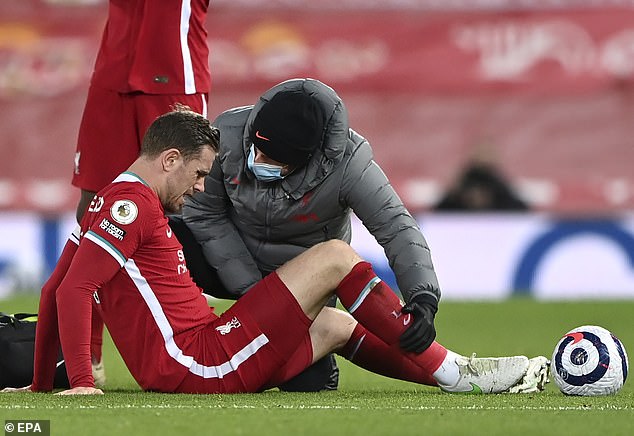 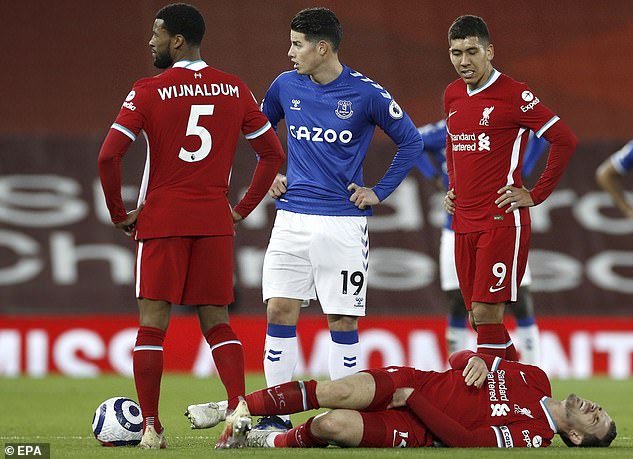 Henderson was forced off after 30 minutes against Everton with an adductor issue. The 30-year-old was being pursued by Everton midfielder Abdoulaye Doucoure when he pulled up sharply and crumpled to the ground.

The midfielder had scans on Monday with the club facing an anxious wait to find out how long he could be out for.

It is a huge blow for Klopp, who is already without a number of key men which has seen their title defence turn to ash.

Liverpool have found it impossible to replace key defenders Virgil van Dijk, Joe Gomez and Joel Matip. Henderson and Fabinho, who had been deputising in the heart of the defence, have now succumbed themselves.

Klopp said of Henderson’s injury after the defeat at Anfield: ‘Nobody in the medical department was positive about it. It doesn’t look good.’

Should Henderson require surgery, it would also be a major worry for England boss Gareth Southgate.

He would be unlikely to full train until late May at the earliest, which would see him struggle to get match fit in time for the Euros, which kick off on June 13 for the Three Lions.

Even if surgery isn’t required, Henderson will likely miss Premier League fixtures against Sheffield United, Chelsea, Fulham and Wolves as well as Liverpool’s second leg against RB Leipzig in the Champions League on March 10.

Henderson missed Liverpool’s final run of games in their title-winning campaign last year after he picked up a knee injury against Brighton in July.