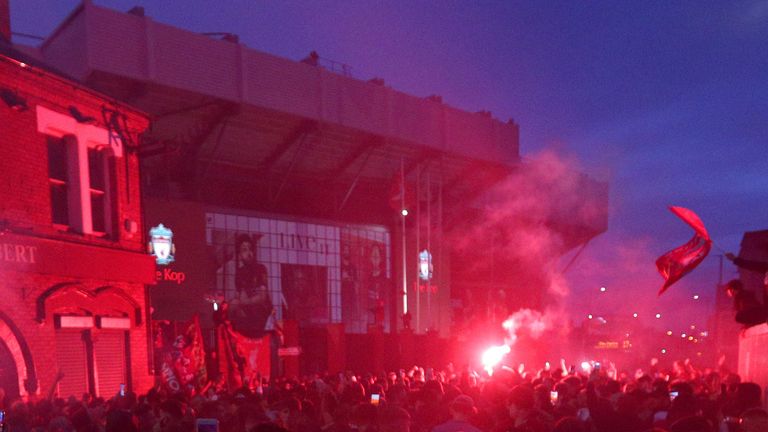 Merseyside Police issued a dispersal zone around Anfield on Wednesday evening after Liverpool fans defied warnings not to gather outside the stadium on Premier League trophy night.

The force moved to set up the quarantine following scenes of tightly-packed crowds on the streets outside the ground, while the champions played out their final game of the season at home to Chelsea, winning 5-3.

Both police and the club had warned fans not to gather outside the ground due to coronavirus social distancing guidelines, but many appeared less than one metre between each other and were not wearing masks.

As the game reached its conclusion and fireworks could be heard from inside the ground, Merseyside Police tweeted: “A dispersal zone now in place outside Anfield Stadium following increased numbers of people gathering near to the ground tonight.

“Please don’t put yourselves and others at risk, the best view of the trophy presentation will be on the TV.”

Chief Constable Andy Cooke had warned before the game that supporters could face arrest if they congregated in large numbers outside Anfield on Wednesday night.

“I’m not just here as the chief constable of Merseyside Police today,” he said. “I’m here as a father, husband, son and brother who cares about their family and friends and the potential impact a second spike of coronavirus could have on the people of Merseyside.