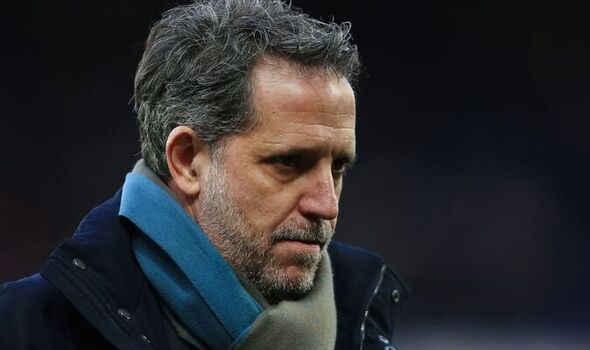 Tottenham technical director Fabio Paratici was reportedly in attendance for Fulham’s Championship victory over Millwall in midweek and one player highly likely to have been under the magnifying glass – and potentially even the subject of the trip – is Liverpool target Fabio Carvalho. The 19-year-old, who joined the Cottagers from Non-League outfit Balham in 2014, broke into the first-team set-up back in 2020 – signing a two-year pro deal.

Now Fulham are struggling to keep hold of their academy gem, who is out of contract this summer.

Carvalho was set to sign for Premier League giants Liverpool on transfer deadline day last month for around £8million plus add-ons, before an 11th-hour move collapsed in the final minutes of the window.

While Anfield chiefs were able to agree a package with Fulham, the relevant paperwork was not completed in time despite the teenager undergoing a medical on Merseyside.

Now the race for his services has been blown wide open – Liverpool’s biggest fear – with a number of other sides now expected to enter the running.

That’s why Paratici’s visit to Craven Cottage could be of significance – although there are no guarantees he was watching Carvalho.

The playmaker is now hot property and is considered to be one of the finest young talents in English football.

Furthermore, the visit would align with Paratici’s recent movements away from Tottenham surrounding the club’s potential recruitment plans.

He is understood to have watched Nottingham Forest duo Djed Spence and Brennan Johnson shine last weekend against Leicester in their 4-1 fourth-round FA Cup victory.

The Italian is now on the lookout for young prospects that can improve Antonio Conte’s squad at Spurs – both for now and the future.

Tottenham are thought to be keen on Carvalho, while Liverpool remain hopeful they will still win the race this summer.

Any potential suitor will have to go through a tribunal – similarly to Harvey Elliott’s Fulham exit – to determine any final fee they pay for the player.

Liverpool boss Klopp has already made it clear the former Benfica academy star remains of interest to his side.

“We are still interested – it would be crazy if we were not,” said Klopp.

“It was late, the window closed, it did not work out. We’ll see what happens.”

He said last week: “The day after, I saw him with the same smile on his face like always.

“He came into the session to enjoy and to work hard and that is the most important thing for him.”