Mohamed Salah has gone viral after the Egyptian surprised locals in Liverpool by pulling up at a Sainsbury’s petrol garage. The forward was snapped wearing his full Liverpool training kit and protective gloves while filling up his car.

One supporter took a picture of a smiling Salah and revealed that the Liverpool star even went the extra mile to leave a lasting impression.

He reportedly paid for everybody’s fuel at the petrol station located in the Old Swan area of Liverpool.

Salah and his fellow team-mates have been back training at Melwood for two weeks now. 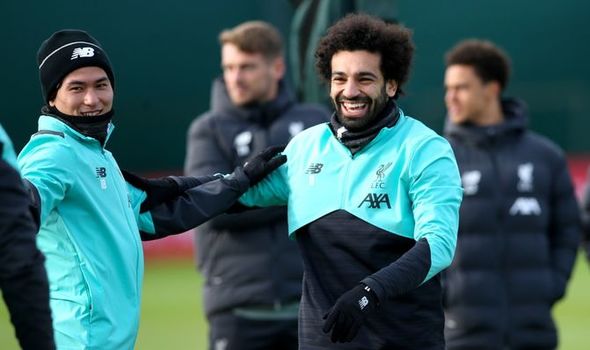 Their Premier League campaign will resume next Sunday when they take on Everton at Goodison Park in the Merseyside derby.

It’s a match that could see them crowned champions, permitting Arsenal beat Manchester City at the Etihad Stadium on June 17.

Regardless of that, Liverpool need just six points to win the Premier League title.

Salah has played a huge part in the club’s season and has scored 16 goals in the Premier League this term.

With plenty of football still yet to be played, there is every chance Salah could win his third successive Premier League golden boot.

Salah is a popular figure around Melwood and youngster Harvey Elliott recently revealed his admiration for his team-mate following guidance behind the scenes.

The youngster was asked to describe Salah: “King, I would say!”

“Just because of his style of play and who he is on and off the pitch.

“Myself, looking at him in my position, I idolise him a lot.

“To be going up against him in training, I learn a lot of things from him.

“Even in the gym as well, he is telling me to do a higher weight, push myself even more.

“To have him in the club and around us young players, he is a really big influence.”

Fabinho 'set for talks with Liverpool over a new contract'