Liverpool will finish third in the Premier League this season following the transfer business completed by Chelsea and Manchester City, reckons former Tottenham and Sunderland striker Darren Bent. Liverpool brushed aside almost every opponent last season to win a record-breaking first ever Premier League title. But Bent says Jurgen Klopp has not strengthened his squad enough to finish top for a second successive season.

Liverpool have only brought in Greek left-back Kostas Tsimikas so far in this window, who is expected to be a back-up option to Andy Robertson.

Meanwhile, Chelsea have splashed the cash on six new signings and are set to add a seventh in Rennes goalkeeper Edouard Mendy.

Chelsea boss Frank Lampard has brought in Hakim Ziyech, Timo Werner and Kai Havertz to strengthen his attack and Thiago Silva, Ben Chilwell and Malang Sarr to add to his backline.

Manchester City have spent over £60million on Nathan Ake and Ferran Torres and Bent expects Pep Guardiola to add further additions before the October 5 deadline.

JUST IN: Man Utd may trigger Mourinho anger by signing forward but not from Tottenham 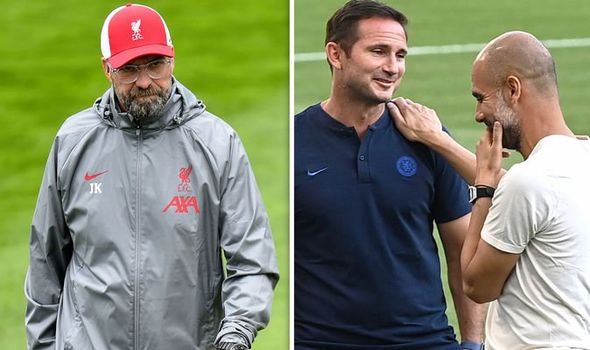 And he thinks those improvements will take both City and Chelsea ahead of Liverpool, with City winning their third title in four seasons.

“Manchester City yeah, I think they’ll strengthen again, so I think they are the best team,” Bent said on talkSPORT.

“I think Chelsea, with all the players they’ve brought in, I think they’re just going to find a way of getting it done. So I think they will finish second.

“Liverpool haven’t strengthened enough and their players look knackered to me, what I’ve seen of them so far, so I think they will finish third.

“I think Manchester United will just pip the rest to fourth, yeah.”

Meanwhile, Liverpool legend Graeme Souness says a lack of signings is good news for the Anfield youngsters but he can see Klopp bringing in another new face before the end of the window.

“I think it’s telling you something,” Souness told Sky Sports.

“I think Jurgen must feel he’s got players coming through the system to fill the gaps when the current players get injured.

“I think in recent history Fabinho and Andy Robertson were both that where they got them into the club, had a good look at what they had to offer, they fitted into the system nicely when they got introduced.

“So I think that would be a real vote of confidence to the young players at the football club if they don’t buy.

“But I have a sneaky feeling that they may still have a go at someone.”