Liverpool made it two wins from two in the Premier League with a 2-0 victory over Burnley.

Despite the return of the home fans it was the away side which arguably made the brighter start, Dwight McNeil hitting the post – an offside flag went up anyway – and Chris Wood causing the centre-backs problems.

The Reds hadn’t fashioned too many openings by the time they opened the scoring, but Kostas Tsimikas’ inviting cross was headed in by Diogo Jota and Jurgen Klopp’s team stepped up somewhat after that, Mohamed Salah netting before an offside was spotted by the VAR and the Egyptian also curling another shot on-target before the break, Nick Pope this time saving.

Ashley Barnes saw a strike ruled out immediately after the restart for offside, before Liverpool started to dominate far more – Sadio Mane eventually lashing the Reds’ second home after a fantastic flowing move.

Here are the player ratings from Anfield on Saturday.

Alisson Becker – 8. Some decent stops in the first half, though beaten right before the break by a Tarkowski header which dropped wide.

Trent Alexander-Arnold – 7. Struggled to contain McNeil on the run, but as effective as ever playing forward. Lovely assist for the second.

Joel Matip – 6. A mixed bag in dealing with Woods and Barnes. Quite a few runs got in behind him.

Virgil van Dijk – 8. Big tackle inside his own box to prevent a clear scoring chance. Several big aerial wins too and his long-range passing was on show too.

Kostas Tsimikas – 7. Great delivery for another assist and corners which caused problems. Most of Burnley’s best attacks came from the opposite flank.

Jordan Henderson – 7. A few neat clipped balls created danger, and passes from deep set his team away too. Not always on top of things defensively but this was his first start since February.

Harvey Elliott – 7. Very confident on his first league start for the Reds, though caught in possession once or twice and fouled a few times too. Great through-passes at times in the final third.

Naby Keita – 7. First half was a mix of good and bad on the ball, but he looked good on the counter-attack.

Mohamed Salah – 8. Fine finish ruled out for offside. Always a threat and roved centrally somewhat more than usual. One effort blocked on the line and created plenty for his team-mates too.

Diogo Jota – 7. Great movement for the goal, across the defender and heading in. Not always involved in the build-up but gave Liverpool a presence in the box.

Sadio Mane – 7. Off the pace for part of the first half but linked play nicely at times. Improved after half-time and saw a few chances saved – then buried his one-on-one. 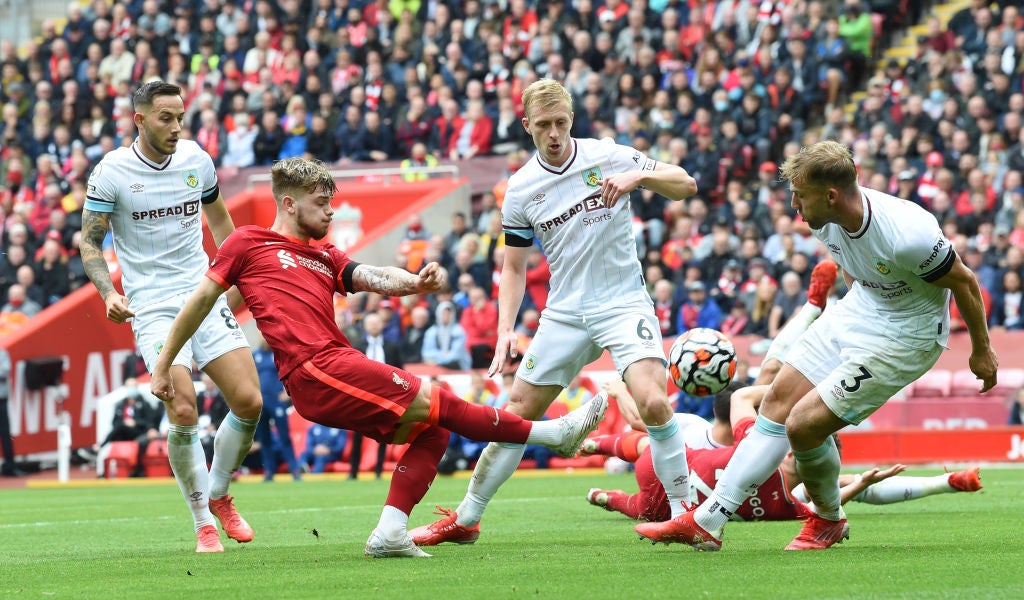 Nick Pope – 6. Nothing he could do about the goals and saved a fair few other efforts.

Matt Lowton – 7. Excellent running forward with quick passes and dribbling when he had the chance. Defended with tenacity.

Ben Mee – 5. Beaten by the run for the opener and wasn’t able to cover the run of Mane for the second.

James Tarkowski – 7. Made some big blocks and tackles in the first half and one headed clearance from a goalbound shot.

Charlie Taylor – 5. Struggled against Salah and Alexander-Arnold doubling up. Really couldn’t cope with Elliott filtering that side too.

Johan Gudmundsson – 5. More aggression than inspiration today. Lucky not to be carded at least twice.

Josh Brownhill – 7. A typically all-action display between both boxes. Neat on the ball in general.

Jack Cork – 6. Overrun somewhat more than his partner in the centre, couldn’t really get close to Keita and co.

Dwight McNeil – 7. Two brilliant deliveries in the first half and a shot Alisson had to beat away. One fine block on the line.

Ashley Barnes – 5. Busy as always and harrassed the defence non-stop.

Chris Wood – 6. A non-stop battle with Van Dijk and won his share of the duels. Didn’t get much service after the break.