Lucy Bronze will not be satisfied until she has won it all and credits team success for her being named The Best FIFA Women’s Player for 2020.

Bronze, who returned to Manchester City in the summer after spending three years at Lyon, beat Chelsea’s Pernille Harder and Lyon defender Wendie Renard to the prestigious award on Thursday.

The England defender won three straight Champions League and French league titles during her time in France and says her latest individual accolade is the culmination of hard work over that period.

Bronze told Sky Sports News: “From successful teams, come successful individuals. I am good at everything, I have to win everything but when it comes to the individual limelight, that’s not me.

“That’s why I enjoy playing a team sport. I could have picked tennis or athletics, but I need to be part of a team and share my success but also build other people up.” 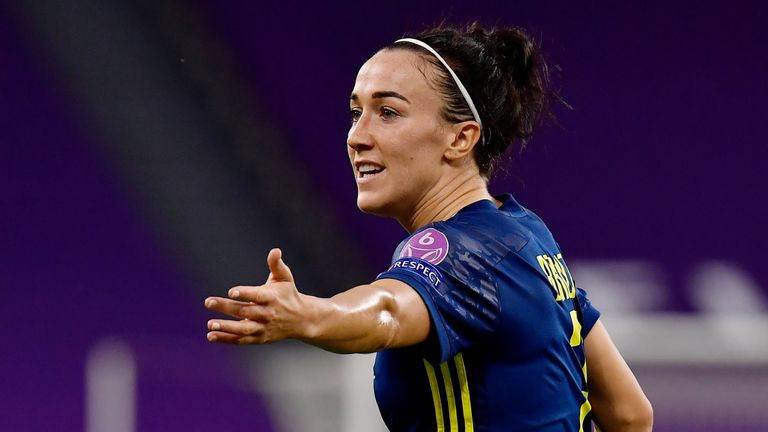 At the virtual event on Thursday, Bronze spoke of her “surprise” at receiving the prize, and she is excited to finally have the trophy in person.

“It’s indescribable,” Bronze said. “I’m just and happy and excited to get my hands on the award.

“This year has been such a crazy year, in life in general let alone in football. Especially in women’s football, so many leagues got cancelled or cut short.

“For myself, winning this award is probably an accumulation of things I’ve achieved this year and the previous year. I’m very grateful for it.”

‘England are getting the best’ 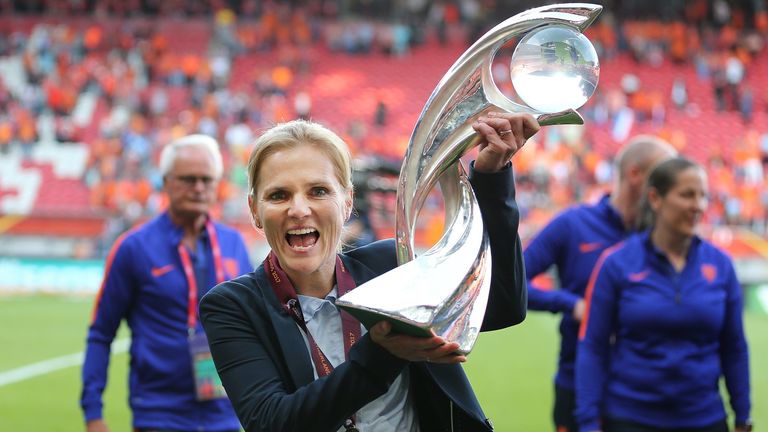 Bronze is hoping for yet more team success with England, who, from September 2021, will be able to boast having the best player and best head coach in the world.

Wiegman guided the Netherlands to eight straight wins in UEFA Women’s Championship qualifying, though come the tournament she will be in charge of England after Euro 2021 was pushed back a year due to the coronavirus pandemic.

“The players are probably just as excited as anybody,” Bronze said. “We know what kind of pedigree Sarina is. She has been there and done it.

“She’s done exactly what we want to do: Win a home Euros and get to a World Cup final. It’s exciting to know we’ve got someone who knows exactly what it takes to be there. She is the best. England are getting the best.”

England Women head coach Phil Neville says he knew Bronze would go on to become the best player in the world ever since his first day in charge of the Lionesses.

“I’m super proud, that’s what I texted her (on the night of the award ceremony). You see the journey and the hard work that goes on behind the scenes,” Neville told Sky Sports News.

“As her manager, I have seen first-hand and close-up the work, the sacrifice and dedication Lucy puts in. She has the obsession to become the best.

“When I first met her I had heard a lot about her. She was probably not in the top five in the world at that time but I saw someone who was incredible driven to be the best. She wanted to win that award and the biggest obstacle in her mind was being a full-back.

“From day one I thought she was the best player in the world. In terms of recognition outside of England, I think her performances at the World Cup and for Lyon in the Champions League became recognised. The improvements she has made every single year sets her apart.”

The Lionesses boss also believes a player of Bronze’s stature will not want the disappointment of some day looking back on a career which does not include a winner’s medal with England.

“I think that is the next progression for her, to be part of a national side that wins a medal. It would be sad for someone for her level not to win a medal (with England).

Manchester City men’s boss Pep Guardiola says the club is proud to have the best female player in the world among their ranks but made a point to credit her former club Lyon for her rise to the top of the women’s game.

“We cannot forget it is a team sport so everyone is involved with Lucy (Bronze) creating an incredible job in France and Lyon so congratulations for her and her previous club,” he said.

“And we’re proud she is here – the better players we can have, men and women, then the more success so big congratulations for her and all our team.”

Matteo Guendouzi tipped to leave Arsenal for failing to ‘knuckle down’