Swansea maintained their push for automatic promotion and extended their unbeaten run to four games with a narrow 1-0 victory over Luton.

The deciding goal came inside the first five minutes at Kenilworth Road, when Conor Hourihane calmly slotted his fifth goal since joining the Swans on loan from Aston Villa (3).

Luton – who had Dan Potts stretchered off with a suspected head injury – had several chances to level, particularly after the break, yet were unable to strike and add a valuable point to further distance themselves from the relegation battle.

Steve Cooper’s men move back up above into second place, seven points behind leaders Norwich, with Luton down in 16th, 12 points off the bottom three.

How Swansea picked up another valuable win

Brentford’s gritty win at Blackburn on Friday night moved them level with Swansea and Watford on 66 points and shifted the onus back to the Swans to maintain their momentum and slip back into the top two ahead of Watford’s trip to Cardiff. 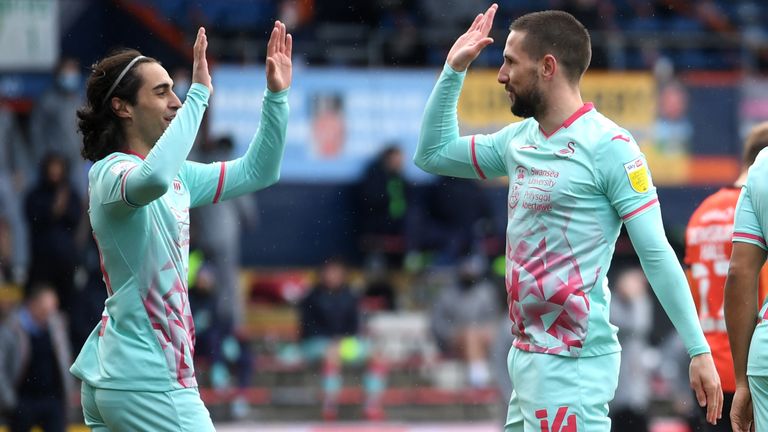 It didn’t take long for the game to spark into life and no sooner had Matty Pearson had a shot hooked off the line, the visitors charged towards Luton and edged ahead when Yan Dhanda’s pull-back was swept home by Hourihane.

The hosts responded well and had the ball in the net when Potts nodded in Harry Cornick’s cross, only to see it chalked off for offside, while their pressure almost paid off when Pelly Ruddock-Mpanzu seized on a weak clearance from Freddie Woodman and looped a shot towards the top left corner that forced the goalkeeper to back-peddle before he made the save.

The game was brought to a halt before the break, when Potts came off worse after an aerial battle with Hourihane and, after an eight-minute period to allow the medical team to attend to him, he was stretchered off and replaced by Martin Cranie.

Luton were dominant after the break and set alarm bells ringing for the visitors when Elijah Adebayo broke free of Joel Latibeaudiere’s clutches and laid on a wonderful cross that just evaded Cornick, before Adebayo cut inside Kyle Naughton and hit a shot wide of the right-hand post.

Jordan Clark was then presented with a similar chance to Cornick but missed his header from 10 yards out and after that, Swansea regained their footing in the game and stood firm to take all three points.

Man of the match – Kiernan Dewsbury-Hall

“I think he has been the heartbeat of everything Luton have done so well. He created good chances they should have capitalised on. His composure was great at times and I think his class showed.”

Both sides are next in action on Tuesday, 16 March. Luton host Coventry at Kenilworth Road at 7pm, while Bournemouth welcome Swansea to the Vitality Stadium at 7.45pm. Both matches are live across Sky Sports.