Report and highlights from the Sky Bet Championship clash between Luton Town and Coventry at Kenilworth Road as James Bree and Elijah Adebayo’s penalty steered the Hatters past 10-man Coventry; Kyle McFadzean sent off for Sky Blues.

Luton eased to victory over 10-man Coventry at Kenilworth Road to leave the visitors mired in the Sky Bet Championship relegation fight.

A first senior goal for former Aston Villa full-back James Bree set the hosts on their way, with the 2-0 result secured as Elijah Adebayo converted a penalty after Kyle McFadzean had been sent off for handball.

An early free-kick caused havoc in the Coventry box and, following a goalmouth scramble, two attempted clearances from the visitors struck the woodwork before being hacked clear. 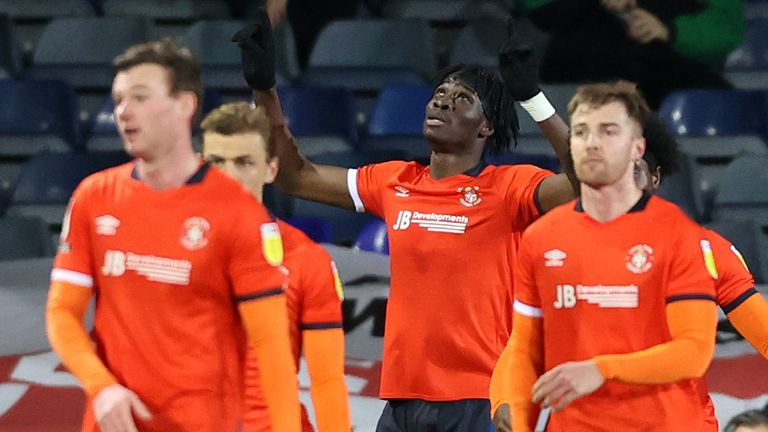 Just moments later and Coventry hit the post at the right end, Maxime Biamou bursting clear and firing past the onrushing Simon Sluga, only to hit the foot of the post.

Biamou then missed the target by some distance when he was again found free of any Luton attention on the edge of the box.

Luton took the lead at the midway point of the first half through an unlikely source, Bree’s low strike beating Ben Wilson after he had been picked out by Harry Cornick.

Coventry’s evening went from bad to worse as McFadzean was sent off four minutes before the interval.

The defender clearly blocked Cornick’s goalbound shot on the line and was dismissed by referee Stephen Martin, with Adebayo slamming home the resulting penalty.

Despite being a man down, Coventry started the second half well, Callum O’Hare seeing a shot blocked as they looked to half the deficit.

Luton made their numerical advantage count as they took control of the game, with Coventry again hitting the frame of their own goal before Ryan Tunnicliffe’s effort was cleared off the line.

Tunnicliffe should have then done better but lost his composure and fired over when well-placed after Jordan Clark had been denied.

The points were in the bag but Luton boss Nathan Jones would have been upset that his side failed to add to their lead in the second half.

Kiernan Dewsbury-Hall was guilty of a bad miss in the closing stages before Sam Nombe’s shot was saved with the last kick of the ball.

The result leaves Luton in touch with the top-half of the table, while Coventry remain two places and six points clear of the relegation zone – although Rotherham have three games in hand in 22nd spot.