Lyon 1-5 Arsenal: Gunners produce STUNNING result to thrash Champions League holders in their own backyard… with Beth Mead and Caitlin Foord both netting doubles for Jonas Eidevall’s side

Yes, you are reading that scoreline correctly – Lyon 1-5 Arsenal. The only English team to ever win the women’s Champions League recorded a historic night in France as they humbled the holders on their own turf.

Lyon were missing several key players such as Ada Hegerberg, Griedge Mbock and Caratine Macario, to name but a few. But Arsenal were also without their two starting centre backs in Leah Williamson and Rafaelle. The Gunners coped better.

This was their biggest win to date under manager Jonas Eidevall, who got his team selection and tactics spot on. Eyebrows were raised when star player Vivianne Miedema was named on the bench. But her replacement, Frida Maanum, was arguably the best player on the pitch. 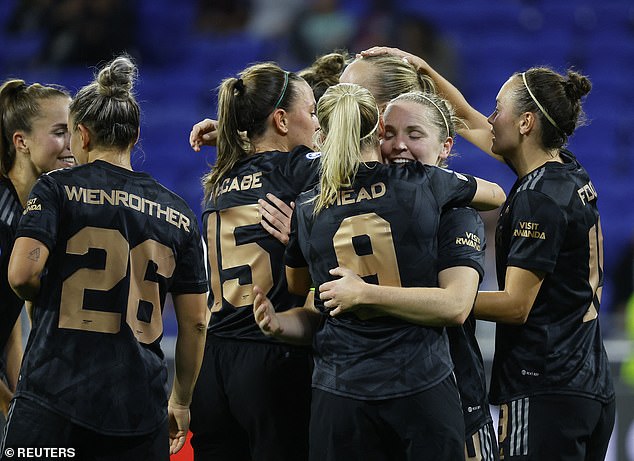 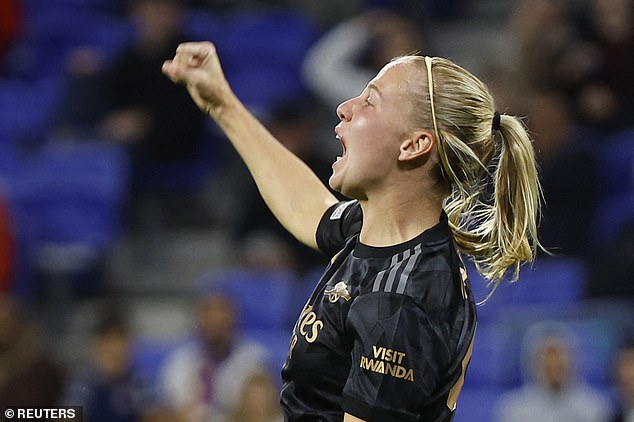 Eidevall sacrificed Miedema’s attacking quality for Maanum’s defensive stability but the Norwegian midfielder proved to be influential higher up the pitch, with a goal and assist in either half.

Caitlin Foord and Beth Mead were also superb, with both players scoring twice. Arsenal were 3-1 ahead at half-time. It was the first time the French side had conceded three goals at home since they became Olympique Lyonnais in 2004.

English teams have struggled in Europe in recent years but, make no mistake, this was a statement win.

Arsenal were magnificent from start to finish and they took the lead after just 13 minutes as Foord finished off a brilliant team move. Kim Little’s lofted pass picked out Mead down the right wing and her first-time cross was met by a sliding Foord at the back-post.

The hosts were stunned and ten minutes later they were 2-0 down. Stina Blackstenius got in behind the Lyon defence and found herself one on one with Christiane Endler. The Lyon goalkeeper saved her initial shot but she could do nothing to prevent Maanum firing in the re-bound.

The Gunners were worthy of their two-goal lead but a lapse in concentration allowed Lyon back into the game. A Salma Bacher corner was deflected onto the crossbar by Lyndsey Horan and the ball dropped to Melvine Malard, who converted the re-bound.

Despite pulling a goal back, Lyon boss Sonia Bompastor was clearly unhappy with her side’s first half performance and she opted to make substitute in the 38th minute, bringing off Ines Jaurena for Damaris Egurrola.

But that change did little to turn the tide as Arsenal made it 3-1 just before half-time. Wendie Renard brought down Blackstenius on the edge of the box and Mead converted the free-kick with a low strike into the bottom right corner. 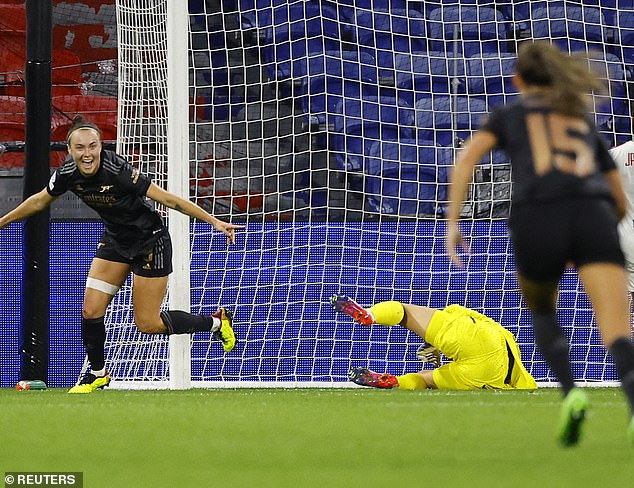 Bompastor resisted making any further changes at half-time but her side continued to struggle at the start of the second half. Eugenie Le Sommer sent a tame header into the hands of Manuela Zinsberger but it was Arsenal who were creating the better chances. Blackstenius forced Endler into a fine save at her near post before the striker again went close from a corner.

But Arsenal did not need to wait much longer for a fourth as Foord fired in the best strike of the game. The striker picked the ball up 25 yards from goal and bent a brilliant shot into the top right corner.

Lyon were all over the place as they conceded a fifth from their own kick-off. A loose pass was picked up by Mannum and she played in Mead, who slotted in calmly from close range. Chelsea take on Paris Saint-Germain on Thursday night but it will take some performance out-do their London rivals.